In the most expensive US markets, apartment rents hit a ceiling some time ago, in some cases four years ago, and have dropped from those highs, as tenants have reached their limit. That this wasn’t a brief fluke, after which rents would surge again in those markets, is becoming increasingly apparent. At the same time, sharp rent increases have moved down to less expensive markets.

Clearly, after years of surging rents in Seattle, a ceiling has been hit. At the same time, the phenomenal boom in apartment and condo construction over the past few years has put plenty of supply on the market – though it’s all high-end, and therefore mostly the wrong supply. And those vacant high-end units that need to be filled are putting downward pressure on the entire scale.

San Francisco’s are the most ridiculously high rents among large US cities. Locally, it’s considered part of the “Housing Crisis,” which has many aspects, including that 1% of the population is homeless. Despite all the hoopla and the money in San Francisco, rent increases have been smacking into basic market forces starting in late 2015, and those market forces haven’t abated since.

In terms of serious rent declines at among the most expensive and largest rental markets, Chicago and Honolulu stand out.

The table below shows the 16 most expensive major rental markets in the US. The shaded area indicates peak rents and the changes since then. Boston and Ft. Lauderdale are the only markets on this list whose median asking rents reached a new highs in July: 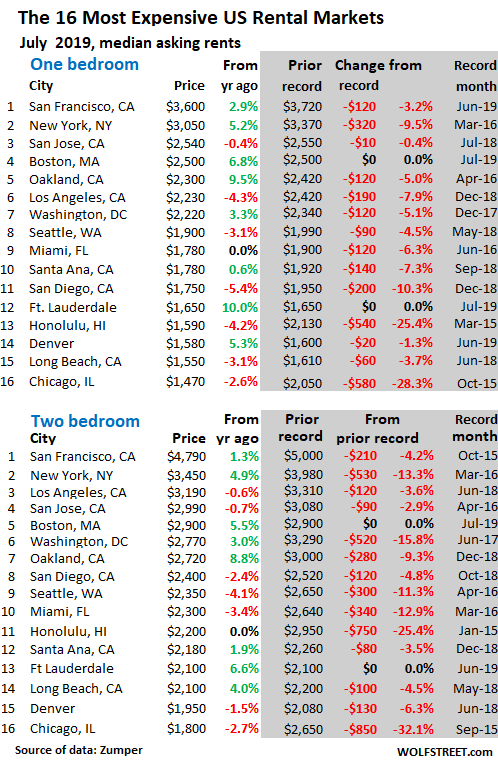 “Asking rent” is the amount advertised in the listing. This is a measure of the current market for people looking to rent. It is not a measure of rents that long-time tenants actually pay. “Median” means: half of the advertised rents are higher, and half are lower.

The data is based on over 1 million active listings in the 100 largest markets that Zumper combs through, including third-party listings from Multiple Listings Service (MLS), of apartments-for-rent in apartment buildings, including new construction. But it excludes single-family houses and condos for rent. It also excludes rooms, efficiency apartments, and apartments with three or more bedrooms. Incentives, such as “one month free,” are also excluded.

The 15 Cities with the largest rent declines:

What was red-hot once is now ice-cold. Here are the 15 cities that in July experienced the largest year-over-year declines in median asking rents for 1-BR apartments. At the top is Nashville, which had been a red-hot rental market until this year when market forces pulled the ripcord. Also note Houston and Dallas on the list — and another formerly red-hot market, Portland:

The 15 Cities with the biggest rent increases:

But rents are soaring in some of the top 100 major rental markets, with 10 markets experiencing double-digit year-over-year surges in median asking rents for 1-BR apartments. Oakland is on this list, but note that its 1-BR asking rent, despite the surge, is still down 5% from its peak in April 2016, see table above  (if your smartphone clips the right side of the table, hold your device in landscape position):

But the drama gets averaged away on a national basis.

The largest 100 Cities, by magnitude of 1-BR rent.

Below is Zumper’s list of the top 100 most expensive major rental markets, sorted by 1-BR asking rents in July, with year-over-year percent changes (Y/Y %). You can use your browser’s search function to find a city. If your smartphone clips the right side of the table, hold your device in landscape position: