Order backlog still feeds truck makers, but they don’t disclose for how long.

Orders for Class 8 trucks – the iconic trucks that haul part of the economy’s goods across the country – collapsed by 81% in July compared to July last year, to 9,800 units, the lowest since 2010, according to FTR Transportation Intelligence on Friday. It was the ninth month in a row of year-over-year declines. But “declines” is not the right word. This year so far, these year-over-year “declines” ranged from -52% to -81%, which makes for a stunning collapse of the historic boom last year: 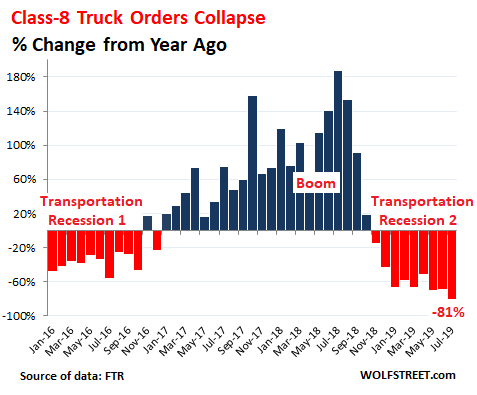 The phenomenal boom of orders for Class 8 trucks reached over 52,000 orders a month in July and August 2018, in a desperate explosion of orders amid a mind-boggling event then called a “capacity panic,” a panic that the US would run out of trucks to haul the sudden surge of goods produced or imported by “the greatest economy in the history of our country” – as President Trump put it last year.

And this created an ordering panic where every trucking company, from J.B. Hunt [JBHT] and YRC Freight [YRCW] on down, tried to get its orders in ahead of the others because the backlog was already huge and wait-times were getting longer. But as freight shipments in the US began to return to normal, and then began to decline, instead of booming, the panic subsided, and truckers reacted by slashing their orders, and cancelling what they could: 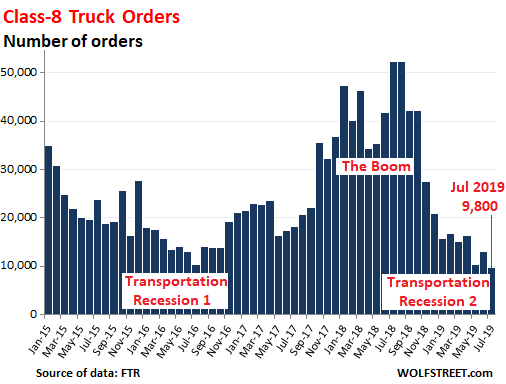 Freight volume in terms of shipments by all modes of transportation – truck, rail, barge, and air – has been declining on a year-over-year basis for the seventh month in a row in June, according to the Cass Freight Index for Shipments. July shipments, to be reported in mid-August, will likely show eight months in a row of declines:

And so the capacity panic has turned into a capacity glut. The trucks that were ordered last year are still being delivered. The backlog has likely shrunk by more than half over the past 10 months to below 200,000 units. And those 2019 model-year trucks are still being built, and they’re still coming. Manufacturers have just opened the ordering process for model-year 2020 trucks, and obviously, orders are only trickling in.

Given the boom in orders last year, and the ensuing historic backlog at truck makers, actual truck sales as measured by deliveries to trucking companies, have been limited only by the capacity of the truck makers to manufacture the trucks.

In July, truck makers delivered 43,200 Class-8 trucks, according to data released by the Bureau of Economic Analysis on Friday. Over the past few months, sales have nudged up against the records set in 2006 through December that year. But an epic plunge in sales began in January 2007 – well before the financial system officially threatened to fall apart: 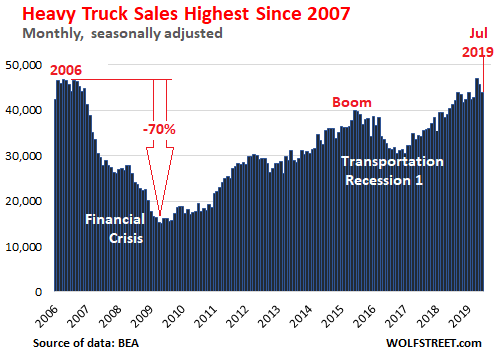 Truck manufacturers have been on cloud 9, reporting record sales while eating through their backlog. But cloud 9 is now dissolving into ambient air. During Transportation Recession 1, after the truck makers had worked through their backlog, the music switched to earnings warnings and layoffs.

Sales follow orders with a lag, and that lag is long, thanks to the record backlog last year that is now being eaten away. Truck makers – Peterbilt and Kenworth, divisions of Paccar [PCAR]; Navistar International [NAV]; Freightliner and Western Star, divisions of Daimler; and Mack Trucks and Volvo Trucks, divisions of Volvo Group – will eventually fess up to the reality of the collapse in orders. But not yet.

Truck manufacturers don’t disclose their order backlog. For example, Paccar says, “As a practical expedient, the Company is not disclosing truck order backlog, as a significant majority of the backlog has a duration of less than one year.”

Investors are deemed to have no need to know. Therefore, industry order backlog figures are estimates. But order backlog is a crucial data point: A large backlog can paper over a plunge in orders for a long time. And then suddenly, it’s gone.

For example, during Transportation Recession 1, orders for Class 8 trucks began to plunge in early 2015 and hit the lowest levels in mid-2016 through October 2016. By November 2016, orders started to tick up from those desperately low levels. However, production and sales, fed by the order backlog, didn’t start dropping until April 2016 – over a year after orders had begun to plunge. But then they dropped 23% and stayed at low levels for months, leading to said earnings warnings and layoffs.

This time around, orders started plunging in November 2018, so the order backlog will keep truck makers busy through 2019 and likely into early 2020, before the plunge in orders is going to hit production and sales – unless a miracle happens, and orders suddenly resurge in a massive manner. But miracles have become rare in the trucking business. This is why we would like to know Paccar’s order backlog, and that’s precisely why Paccar doesn’t want us to know.

US freight shipments fell for the seventh month in a row. After the boom comes the bust. Read…  “Transportation Recession” Gets Uglier