After the boom comes the bust.

Freight shipments in the US across all modes of transportation – truck, rail, air, and barge – fell 5.3% in June compared to June last year, after having fallen 6.0% in May, the seventh month in a row of year-over-year declines, according to the Cass Freight Index for Shipments. This decline, along with other freight indicators, including orders for heavy trucks, now clearly outline the new Transportation Recession – number 2 since the Great Recession – in this very cyclical business:

In terms of freight traffic by rail, the Association of American Railroads (AAR) reported that in June overall, volume fell 6.3% from a year ago. The volume of intermodal freight – containers hauled by truck and then transferred to rail, or semi-truck trailers that piggyback on special rail cars – dropped 7.2% in June. For the first half, overall freight volume by rail was down 3.2%, with all segments in the red, except Petroleum and Petroleum Products, which was up 23%! Intermodal was down 3.3%.

The Cass Freight Index, which tracks shipments of consumer and industrial goods but not bulk commodities such as grains, has now fallen below the June 2014 level. June 2014 had set a record in shipments just before Transportation Recession 1 came along. The boom in 2018 broke the 2014 records, and by a big margin. And now the industry is back in its own recession.

In the stacked chart below of the Cass Freight Index, the red line denotes 2019 through June, which has now dipped below June 2014 (green line). Note how much of an outlier the boom of 2018 (black line at the top) had been, though it faded sharply at the end of last year: 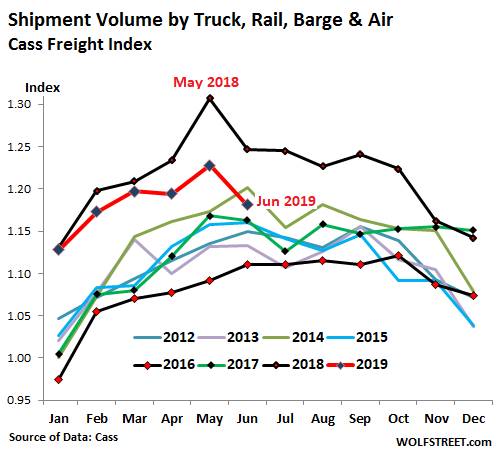 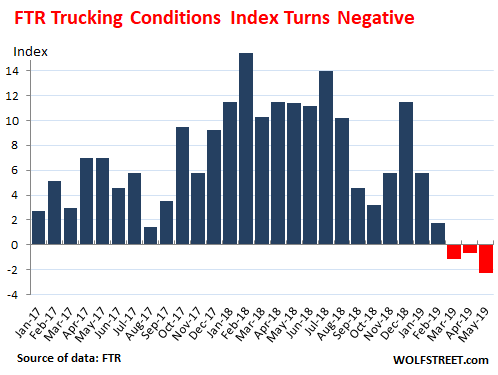 “Most of the weakness is in the industrial sector, so trucking activity related to consumer demand should be relatively stronger than the rest of the industry,” explained Avery Vise, FTR’s VP of trucking.

One of the big industrial sectors is oil and gas drilling, and late last year, it entered the second oil bust since 2014, and now investment in the sector has slowed, even as production continues to surge. Another major industrial sector that has been in a downturn is residential construction. Industrial demand for transportation by truck shows up in demand for shipments by flatbed trailer. The DAT Flatbed Barometer, cited in the Cass Freight Index Report by Donald Broughton, has now completely unwound its historic spike of last year with a historic plunge (click to enlarge): 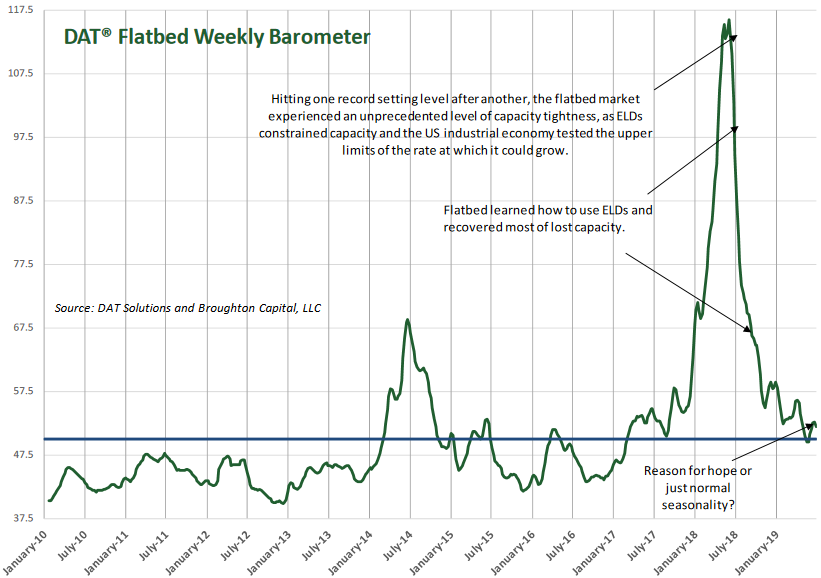 The average national spot rate for flatbed trailers, according to DAT Solutions, the largest truckload freight marketplace in the US, has fallen 18% in June from a year ago, to $2.30 a mile. The average spot rate for van trailers has also fallen 18% year-over-year, to $1.89 a mile.

Contract rates have started to tick down too, but not nearly as much, with van rates down 4.3% year-over-year and flatbed rates down 6.7%.

On Thursday and Friday last week, news emerged that two more trucking companies had shut down. Less-than-truckload carrier LME Inc., headquartered in Roseville, Minnesota, with 30 delivery terminals in several states and hundreds of workers, suddenly shut down. And Timmerman Starlite Trucking in Ceres, near Modesto, California, which was specialized in transporting agricultural products and had 30 employees and 28 trucks, also suddenly shut down.

“We tried to provide a healthy work environment for our employees and give them the best wages and benefits we could,” said Starlite CEO Colby Bell, cited by the Ceres Courier. “But in the end, the rates that were available did not support the cost structure needed to compensate our employees appropriately.” He said that freight rates were about the same as 10 years ago, but costs have risen nearly 40% with additional regulations.

The transportation industry is very cyclical, with big ups and downs. After last year’s blistering boom comes the hangover. Some of that boom had to do with companies front-running potential tariffs and piling up inventories.

The last transportation recession, where the oil bust played a significant role, slowed down the overall economy, as services slowed as well, and in 2016, GDP grew only 1.6%, the lowest since the Great Recession but growth remained positive. So far this year, consumers and the services sector – which is far larger than the goods sector and includes the biggies of healthcare and finance – are holding up better than they’d done in 2016. But for the transportation sector, it will be tougher.

The cyclicality in trucking is also based on the classic mismatch in the timing of demand for transportation that creates a capacity crunch because there aren’t enough trucks, as it had done last year, that in turn creates a boom in orders of trucks. And when a few quarters later those trucks are being delivered, this is precisely when demand for transportation is starting to slow down, cycling the industry from capacity crunch to overcapacity in a very short time.

This mismatch is attested to by orders of heavy trucks that collapsed by about 70% year-over-year, even as sales of trucks that had been ordered last year rose to the highest level since 2006. Read…  Truck Makers Are Going to Have to Fess Up Soon

46 comments for ““Transportation Recession” Gets Uglier”