“Orders” of Heavy Trucks Collapsed by 70% but “Sales” Rose to Highest Level Since 2006: There’s a Lag. And Sales Are Next

Now there is this phenomenon: Orders for Class 8 trucks – the heavy trucks that move a big part of the goods across the US – have collapsed by about 70% in May and June compared to a year earlier, to just over 10,000 truck-orders per month, the lowest in years. But sales of Class 8 trucks in June, as measured by deliveries to trucking companies and truckers, reached 48,168 units, the highest since 2006. So what gives?

This chart shows the number of sales of heavy trucks through June  as reported by the Bureau of Economic Analysis (not seasonally adjusted): 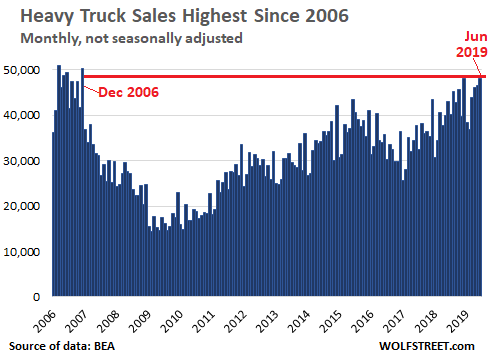 Many of the trucks that were delivered in June and earlier this year were ordered in 2018, which was a banner year for truck orders, that soared to all-time records in July and August with over 52,000 orders each month, according to FTR Transportation Intelligence. These orders created a record backlog at manufactures, already operating at capacity, which lengthened the delays in getting the trucks built. These delays led trucking companies to speed up their orders to get them into the system before the others, which further increased orders, backlogs, and delays. And now these orders are being delivered at a near-record pace.

But orders for Class 8 trucks started declining late last year. In December last year, shipments of goods across all modes of transportation (truck, rail, barge, and air) began to decline. And the capacity crunch dissipated and turned into over-capacity, which put downward pressure on spot rates for truckers.

Orders for Class 8 trucks have now plunged eight months in a row and have hit the lows of the 2015-2016 “transportation recession,” to just barely above 10,000 units a month:

So there is no mystery: The big sales numbers being reported currently are largely based on orders that truck manufacturers received last year during the capacity crunch and the ensuing ordering panic. Now, truck manufacturers and their suppliers are working through their backlogs, and these backlogs, given the plunge in orders, are shrinking rapidly.

These are all 2019 model-year trucks that are being delivered now. Truck manufacturers are in the process of opening up orders for the 2020-model year.

The last cyclical sales peak occurred in mid-2015 at 40,000 trucks per month. At the time, orders had been declining for months. Sales then dropped 26%. Nurtured by the backlog at the beginning of the “transportation recession,” manufacturers kept up production and sales for a while before it hit home, leading to layoffs at truck manufacturers and engine and component suppliers.

The lag between orders and sales continued on the upswing, though the lag was shorter, with orders picking up first in late 2016. By February 2017, sales started picking up, as lead times had been whittled down due to lack of orders in 2015 and 2016. Now the same process is beginning to happen, but more extreme.

The chart below shows orders and sales, juxtaposed, in terms of the percent change each month from the same month in the prior year. Sales are less volatile than orders because sales have a battery, so to speak, namely the backlog that gets charged up during good times and that manufacturers are able to draw on during tough times for a number of months, when they also cut capacity by laying off workers. That peak year-over-year decline in sales during the transportation recession was in July 2016 at 26%, while orders plunged by over 50%: 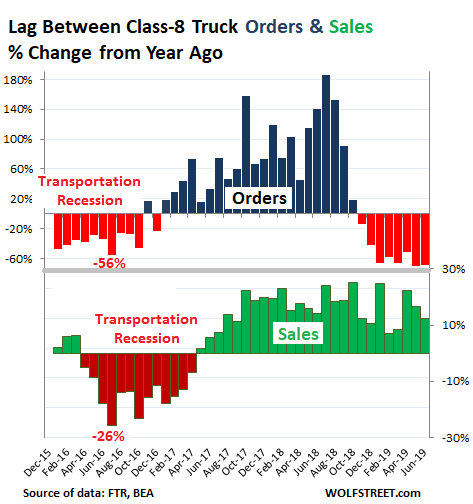 So far, so good for truck manufacturers: Peterbilt and Kenworth of Paccar [PCAR]; Navistar International [NAV]; Freightliner and Western Star of Daimler; and Mack Trucks and Volvo Trucks of Volvo Group. The backlog from the pile of orders in 2018 for Class 8 trucks is still feeding them, and they’re still manufacturing at capacity.

For now, the hope still is that orders for the 2020 model year will start flooding the manufacturers. But trucking companies are adding capacity on a daily basis in form of these new trucks that were ordered last year and that are being delivered now – the “sales” of heavy trucks that have hit the highest level since 2006.

And given this rapid addition to capacity alongside the current decline in shipments of goods by all modes of transportation, and the downward pressure on spot rates and contract rates, trucking companies have become careful with their ordering strategies, and manufacturers will soon be confronted with the cyclical sales decline that is already preprogrammed by the plunge in orders and the decline in the backlog.

After truck manufacturers eat up their backlogs, then what? Read... Trucking is Infamously Cyclical, But This is a Tad Extreme