Amid rampant market expectations of another and even bigger and grander round of QE by the ECB, which would also be buying corporate bonds and old bicycles, the total amount of bonds with negative yields has risen to nearly $13 trillion, according to Bank of America Merrill Lynch.

In a negative-yield environment, you can no longer buy bonds to hold them to maturity because you’d be guaranteed a loss. You’d have to buy them solely on the hopes of even more deeply negative yields in the near future that would allow you to slough off these critters to the next guy before they eat you up.

And this type of thinking has now completely wiped out whatever was left of investors’ capacity to act rationally. Once you start getting into central-bank mandated negative yields, rationality no longer applies because negative-yielding debt is irrational by definition: Why would you pay someone to borrow money from you?

And this type of intellectual short-circuit has now spread to euro-denominated junk bonds. These are risky bonds that are too risky to be considered “investment grate.” They were issued by over-leveraged companies with iffy or negative cashflows and a considerable probability of default, especially during a downturn.

And yes, you guessed it: there are now 14 junk-rated companies with euro-denominated bonds that have negative yields, according to Bloomberg:

What does it even mean if you buy a junk bond with a negative yield?

If the company defaults on the way — which is not unlikely, given its precarious financial condition that led to the junk credit rating in the first place — you’re out part or all of your principal investment. For taking this considerable risk, you’re being rewarded with a big yield, in theory.

But if you pay a lot more for the bond than face value, and if this premium you’re paying is bigger than the remaining interest payments, you end up in the hole, with a guaranteed loss unless you can sell the bonds to someone else at an even bigger premium and even greater negative yield before the bond matures.

What causes these junk bonds to have a negative yield is not some kind of magic but benighted investors whose brain is malfunctioning to the point that they bid up these bonds to such levels that the premium they pay over face value guarantees them a negative yield.

Not all euro junk bonds are adorned with a negative yield just yet. According to the ICE BofAML Euro High Yield Index, the average yield of these critters is 2.83% at the moment – down from 4.9% at the start of the year, when the ECB’s QE program ended: 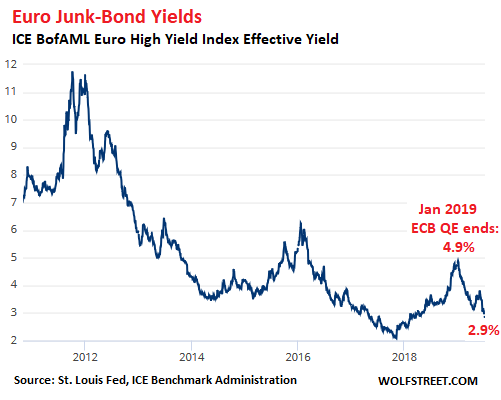 Obviously, investors who’d bought euro junk bonds when euro junk bond yields were 10% or 6% or even 4% made out like bandits if they sold the bonds at current yields to some newcomers.

And these newcomers look at the above chart, and they see the trend that you can keep making out like bandits by buying junk bonds even at negative yields because surely yields will even be lower and more negative in the future, no matter what. And after years of central bank shenanigans and scorched-earth tactics, you can’t really blame these investors for having lost their minds and playing this idiotic game.

Where is the Fed’s “U-Turn” that Wall Street promised us? Read…  Fed Sheds $38 Billion in Treasuries and MBS in June, Dumps MBS at Record Pace, Exceeding “Cap” for First Time

91 comments for “Negative-Yielding Junk Bonds Have Arrived in Europe”