Investment in the auto sector grinds to a halt.

Production of vehicles in the UK plunged 20% in the first half of 2019, compared to the same period last year, as the fallout from sharply declining demand in key export markets such as Europe and China as well as fears of a no-deal Brexit took a heavy toll on the sector, according to the Society of Motor Manufacturers and Traders (SMMT). Engine manufacturing dropped 10% during the same period. And commercial vehicle production, until recently a rare silver lining for the embattled sector, collapsed 57% in June year-over-year, dragging down the first half by 15%. 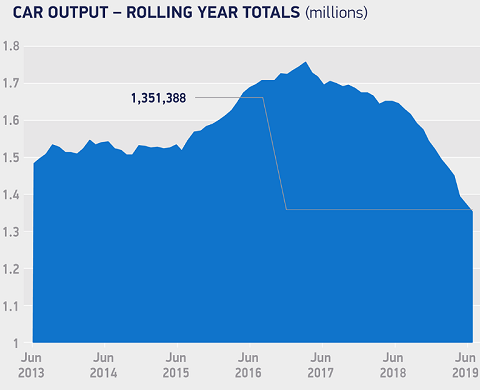 Rolling-year total production — the total amount produced over the previous twelve-month period — hit a post-crisis peak of around 1.75 million units in mid-2016, just after the Brexit referendum. Since then, rolling year totals have fallen 23% to 1.35 million last month, down by around 400,000 units from the 2016 high. The last time it was this low was in 2012.

In the first six months this year, 666,521 cars rolled off the production lines , a year-on-year loss of 168,052 units. Around one out of five of the cars manufactured in the UK are bought by UK consumers. And those consumers are consuming less and less, sending sales to a five-year low in the first half of 2019. Production for the UK market fell 16.4% during the same period. That’s a total of 26,000 fewer cars being built for British consumers.

“Today’s figures are the result of global instability compounded by ongoing fear of ‘no deal’,” said Mike Hawes, CEO of SMMT, in a statement on Wednesday. “This fear is causing investment to stall, as hundreds of millions of pounds are diverted … money that would be better spent tackling technological and environmental challenges.”

Automakers have already spent £330 million to mitigate the risks from a disorderly exit, according to SMMT. Most major UK manufacturers “have tied up working capital, stockpiling materials and components, securing warehousing capacity and investing in new logistics solutions, additional insurance and training in new customs procedures,” the industry group noted. But mitigating Brexit-related risks is an almost impossible challenge when there’s absolutely no clarity as to when the UK may leave the EU, assuming it actually does.

It’s no coincidence that the worst month for UK automakers was April, when year-on-year output plunged by 44%, as factory shutdowns, designed to mitigate against the fallout of a March 29 hard-Brexit, took effect in many plants. Manufacturers like BMW, Jaguar Land Rover, and Honda had scheduled months ahead of the original Brexit deadline a prolonged shutdown of their manufacturing operations amid fears they would not be able to get parts and components from the EU in time, due to border chaos. When Brexit was delayed at the last minute, it was too late to un-schedule the scheduled shutdown.

The irony is that car manufacturers, having bet the house preparing for a no-deal Brexit at the end of March, will not be able to repeat the exercise for the next scheduled Brexit deadline, in 90 days’ time. Which means if there is a “no-deal” Brexit, it will be harder for the industry to respond to it. And right now, the odds of a “no-deal” Brexit are arguably higher than ever, particularly in light of the new Prime Minister Boris Johnson’s pledge to take Britain out of the EU on Oct. 31, regardless of whether he can secure a revised transition deal with the bloc.

Even if there isn’t a hard Brexit at the end of October and the UK and the EU agree to punt the Brexit deadline even further into the future, the damage to the UK’s car industry from the prolonged uncertainty over Brexit is still likely to be huge. As SMMT warns, inward investment into the sector has already “effectively stopped” until more clarity emerges. Just £90 million was spent on new developments in the first six months of the year, a drop in the ocean compared to the average annual investment figure of £2.7 billion over the previous seven years.

In a recent letter to Boris Johnson, Mike Hawes warned that a “no-deal Brexit” poses “an existential threat to our industry”. He implored Johnson to sign a deal with the EU that would “secure frictionless and tariff free trade,” adding that a “‘no-deal’ Brexit is simply not an option.” For the moment, at least in his public persona, Boris Johnson would beg to differ. By Nick Corbishley, for WOLF STREET.

Driven by the Diesel Death-Spiral, a “decline in buyer confidence,” and plunging sales of plug-in hybrids, auto sales in the UK get clobbered. But EV sales soar. Read…  UK Auto Sales Drop to Five-Year Low in First Half