Sales of new passenger vehicles, as measured by registrations, fell 4.9% in June from a year earlier in the UK, according to the Society of Motor Manufacturers and Traders (SMMT). The UK is the second largest auto market in the EU, behind Germany. Total sales in the first half of 2019 dropped 3.4% year-over-year, driven by the ongoing collapse in diesel sales. But sales of gasoline vehicles rose 3.5% in the first half, and sales of battery electric vehicles (BEV) soared 60%.

It is the third year in a row of declining first-half sales for the UK’s automotive sector. Since the peak in the first half of 2016, registrations have dropped 10.6%, falling below 2014 levels. These registrations include leases (dealer sells to leasing company, which leases it to the customer): 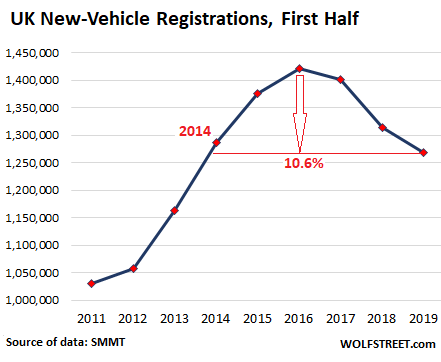 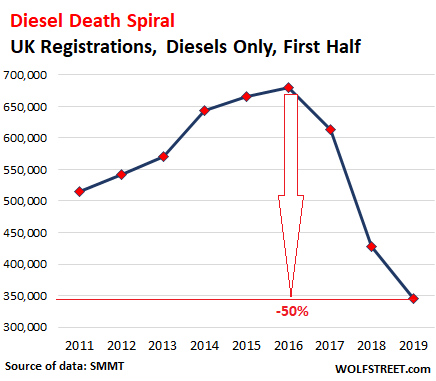 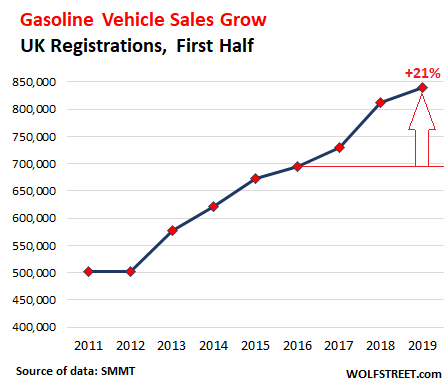 From January through June, sales fell for all three customer types: private customers (-4.8%), fleets (-2.5%), and businesses (-37.1%). There were also declines across every vehicle segment, except Dual Purpose which grew 7.3% year-to-date to take 22.6% of the market.

The so-called “supermini” (a small robust car) remains Britain’s favorite vehicle type, accounting for 31% of all registrations in the first six months. Below are the best sellers in the UK for the first half of 2019 (table via SMMT). Note that eight of the 10 best sellers were either small cars or superminis, the exceptions being two compact SUVs, the Nissan Qashqai and the Ford Kuga: 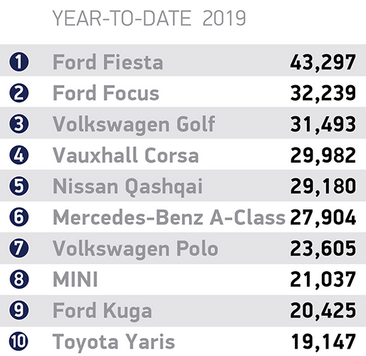 In the alternatively fueled vehicle (AFV) sector, the fates diverge:

“A grave concern,” is what SMMT CEO Mike Hawes called the decline in plug-in hybrids. “Manufacturers have invested billions to bring these vehicles to market but their efforts are now being undermined by confusing policies and the premature removal of purchase incentives.”

The decline in overall new vehicle sales — which the SMMT blames on “ongoing confusion over low emission zones and diesel, the removal of key ultra low emission vehicle incentives and an overall decline in buyer confidence” — is of major concern to global automakers. The UK is the second largest auto market in the EU, behind Germany. It is also the largest single export market for German automakers, which sold 800,000 new cars there in 2016 alone, or 20% of their overall global exports.

Reasons abound for the UK car industry’s multiyear decline, including broad consumer distrust of diesels in Europe and stagnating consumer and business demand in the UK, due in part to the pervading uncertainty surrounding Brexit. But as tempting as it may be, especially for some, to pin much of the blame for the industry’s malaise on Brexit, it’s worth bearing in mind that auto sales have been falling across the EU and other markets, including the two largest, China and the US, and they’re not facing Brexit.

Last year global car sales declined slightly for the first time since 2009, largely driven by a steep decline in China. They’re expected to fall more sharply this year. As car manufacturers reel from an array of disruptive forces — including tectonic technological shifts, trade wars, the end of Europe’s love affair with the diesel engine, and the waning appetite for new vehicles among cash-strapped, debt-laden consumers — one thing is becoming clear: Now is not an easy time to be in the car industry, wherever you are. By Nick Corbishley, for WOLF STREET.

In the US, big equipment is hot and gets pricier. But Carmageddon for cars. Read…  New-Vehicle Sales Fall to 1999 Levels: How to Grow Revenues After 20 Years of Stagnation (Yup, You Guessed It)