Wall Street’s fervent hopes and prayers for rate-cut ammo were not fulfilled.

Wall Street, clamoring for three to four rate cuts this year, was hoping and praying fervently for a lousy jobs report that would “force” the Fed to cut rates. Those hopes and prayers were not fulfilled when the Labor Department released its data trove for June this morning, the last jobs report before the next Fed meeting. Stocks instantly swooned. And the 10-year Treasury yield jumped by 10 basis points from 1.95% to 2.05%! 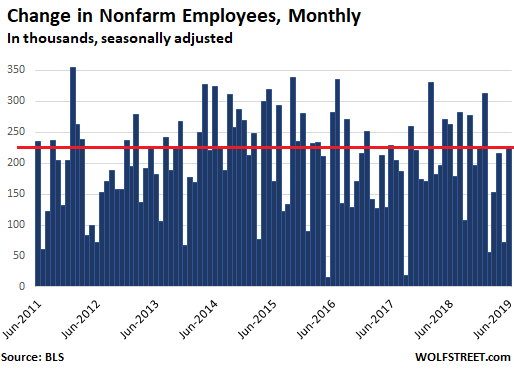 It is due to this jagged-teeth data in the chart above that the Fed doesn’t focus on the movements of one month. And it is why Fed Chair Jerome Powell said during the last FOMC press conference that the Fed is looking at the three-month moving average of the monthly employment report, when he countered the view, propagated by rate-cut mongers on Wall Street, that the job market had suddenly gone to heck, from a strong April to a dreary May. But the monthly ups and downs are not indicative of trends in the job market. He pointed out that the three-month moving average, which irons out the monthly ups and downs, had remained fairly strong.

When these surveys go out to employers – and I received one of them too – employers have some time to respond, and then it takes the BLS some time to put the data together. So that “June” employment data wasn’t even for June. But it was simply the latest reading. And the monthly ups and downs are laden with statistical noise. The vast US job market, unless a sudden catastrophe happens, doesn’t turn around on a dime. 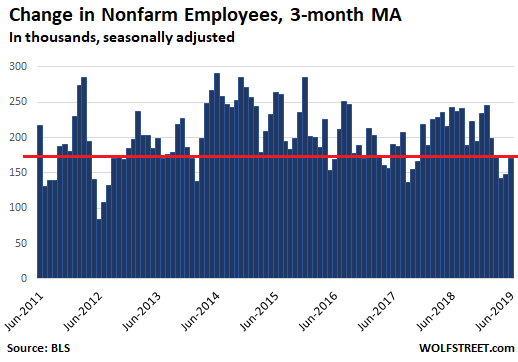 Over the past 12 months through June, the number of nonfarm employees increased by 2.3 million persons. That 12-month increase was in the middle of the range since mid-2011, but down a little from the above-average increases in the second half last year.

This slower increase in hiring has been attributed to just how hard it is getting for employers to hire new people without jacking up wages. Employers are very reluctant to raise their labor costs by even small percentages, because for many of them, labor costs are over half of their total costs, and raising wages has an instant and big impact on profits.

Wages rose 3.1% over the 12-month period, according to the BLS data today. From the Great Recession through mid-2018, wage increases by this measure had been consistently below 3%. In July 2018, the 12-month increase hit 3% for the first time, and these increases have consistently exceeded 3% since then, a sign that employers are finally ceding some ground to the pressures in the labor market.

The narrowest definition of the unemployment rate, which is based on household surveys not employer surveys, “was little changed at 3.7 percent,” as the BLS put it, after ticking up from 3.6% in May and April, as 300,000 people entered the labor force looking for work and therefore counting as unemployed. The rate in May and April had been the lowest since the 1960s. And this measure is down from 4.0% in June last year.

The job market had been crappy for workers since about 2001, with big swings in crappiness including a dive into labor-market hell during the Great Recession. But as crappy as it still is for many workers and those looking for work in some areas, this is the tightest and least-crappy overall labor market since 2001, and it is not suddenly spiraling down, and it is not “forcing” the Fed to cut rates.

The inflation index the Fed anointed as its yardstick booked two big jumps in a row: May near the top of the range since 2010; April, third largest jump since 2010. Read…  Markets Might Hafta Grapple with “Patient”: Fed Rate Cut in July After This Inflation?