Bedraggled by bad weather, lower tax refunds, and the government shutdown, the US economy had caused a lot of handwringing in January and February, with lousy, conflicting, and noisy data in part due to the data blackout caused by the government shutdown. But the data released in March and April started catching up and clearing up, and many data points bounced back, including retail sales. And this morning, the Bureau of Economic Analysis reported that the economy as measured by “real” (inflation-adjusted) GDP grew at an annualized rate of a blowout 3.2%. 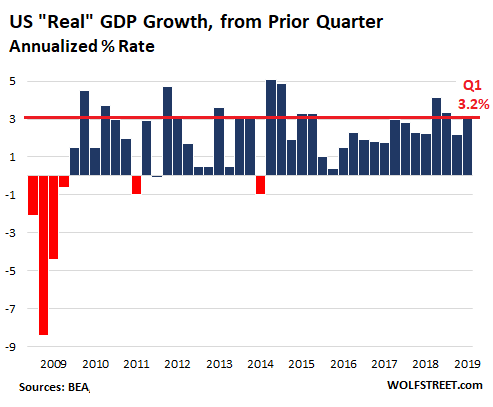 This blew past the median estimate that the economists polled by Bloomberg had recently been ratcheting up to 2.3%.

Sure, weaknesses always lurk somewhere, and there are always plenty of things to pick on, and some of the items were volatile categories that move up and down from quarter to quarter and will likely reverse next quarter.

Plus, inventories rose, and rising inventories, which are considered an investment and add to GDP, are eventually followed by a decline in inventories when companies whittle them down again, and there is a price to pay for it. But these types of ups and downs always appear in the calculus. So here we go:

Some of the biggest drivers behind this growth in Q1 from Q4 2018:

These drivers were partially offset by:

Not adjusted for inflation, “nominal” GDP in Q1 grew by 5.1% from Q1 2018. It was the fourth quarter in a row of nominal year-over-year GDP growth of over 5%. In terms of “current” dollars, not adjusted for inflation, GDP amounted to an annualized $21.06 trillion – “annualized” meaning that if the economy continues on this track for the entire year, total GDP for the entire year would be $21.06 trillion.

This was the BEA’s “advance” estimate that is based on still very incomplete data. The BEA will release its “second” estimate for Q1 on May 30, which will be based on somewhat more complete data. It is likely that today’s surprise jump will be downwardly revised a tad, which is a fairly common feature with surprise data such as this. And this second estimate will be followed by a “third” estimate, by which time everyone will have moved on.

The Fed has vowed in a veritable cacophony to be “patient” in January and February, given the turmoil in the markets in December and the soft patch in the economy in January and February. This cacophony has calmed down a lot since then, and was toned down substantially in the minutes of the March 19-20 FOMC meeting that already put the end-of-patient on the table (see my fancy-schmancy Fed Hawk-o-Meter). This GDP report blows away part of the concerns about the economy, at least for now.

One of the other things that the Fed keeps its eye on is inflation, the bane for consumers whose income is being devalued. This is still a wildcard, but all kinds of consumer-facing companies have been bragging about price increases in their current earnings reports, and that they’re sticking.

Inflation in March, as measured by CPI, already bounced off the February lows, and if the prayers of Corporate America are being answered, will continue to bounce higher, reducing the dip in CPI that started mid-2018 to just another “transitory” episode. And those trying to justify a rate cut in this scenario sound to some of us like their brains were rotted out by too many years of too cheap money.

So sales of new houses finally tick up. Read… Cut the Price and They Will Come: New House Prices Drop to December 2014 Level

75 comments for “I Just Hope the Fed Won’t See This: US Economy Has Blowout First Quarter”