Dollar Hegemony is a tough nut to crack.

China is taking another baby step in promoting the internationalization of the renminbi and nibble on the hegemony of the US dollar: It’s pushing a proposal to add a pile of yuan to the $240 billion currency swap agreement between ASEAN plus China, Japan, and South Korea, in order reduce the system’s reliance on the US dollar and to enhance its own economic clout in the region, according to the Nikkei.

On May 2, the finance ministers and central bankers of ASEAN – Singapore, Brunei, Malaysia, Thailand, Philippines, Indonesia, Vietnam, Laos, Cambodia, and Myanmar – along with those from China, Japan, and Korea will meet in Fiji to discuss modifications to the swap agreement, the Chiang Mai Initiative.

China, which co-chairs the meeting with Thailand, has added language to the draft joint statement concerning use of Asian-currency contributions to the pool – which for now is still entirely in dollars – as “one option” to enhance the swap arrangement.

“Allowing participants to access Asian currencies in an emergency could encourage their use in other contexts, including foreign exchange reserves, the thinking goes,” the Nikkei said. “The idea also anticipates a long-term rise in demand for these currencies in regional investment and trade.”

“China in particular sees it as another step on the path to internationalizing the yuan and expanding its economic influence in the region. But the proposal is likely to be complicated by U.S. alarm at the prospect of Beijing expanding its currency’s role at the dollar’s expense.”

The Chiang Mai Initiative was a response to the 1997 Asian currency crisis. It consists of a pool of US dollars, contributed by members, that members can draw on when their currencies come under attack. Since its establishment in 2000, the dollar pool has been increased to $240 billion. China is now lobbying the other members to add yuan and yen to that pool.

This is just one more effort by China to internationalize its currency, which has been a tough and thankless slog so far, despite the size of the Chinese economy and its giant weight in the global economic fabric.

In terms of global reserve currency, the renminbi (RMB) has a share of only 1.9%, in fifth place, and barely ahead of the Canadian dollar, but miles behind the US dollar (61.7%) and the euro (20.7%). Over the past two years, the RMB has made only microscopic headway as a reserve currency.

And as an international payments currency, the RMB has failed similarly to crack the co-hegemony of the dollar and the euro.

“With more than 1,900 financial institutions now using the RMB for payments with China and Hong Kong, the internationalization of RMB carries great strategic significance” for banks and financial institutions, gushes SWIFT (Society for Worldwide Interbank Financial Telecommunication), which tracks the progress of the RMB as payment currency. 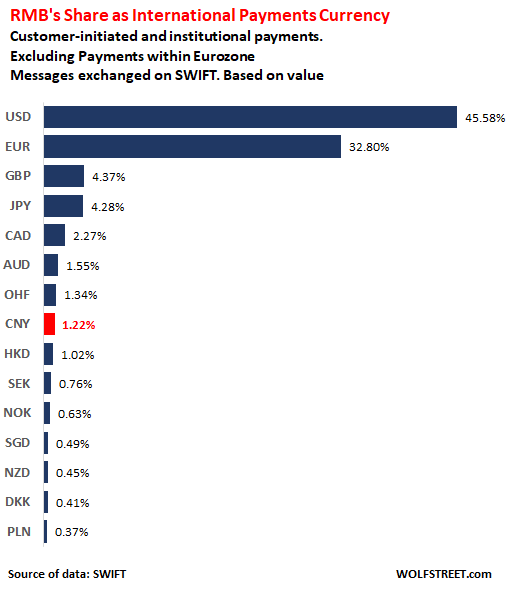 So chipping away at the dollar-euro co-hegemony as payments currencies will take some patience and lots of baby steps, such as China’s efforts to add yuan to the swap arrangement under the Chiang Mai Initiative.

On one hand, its internationalization was supported by major trends, such as:

On the other hand, there was this: “Despite these trends, there are a number of critical success factors necessary for widespread adoption of the RMB.”

And that’s where it gets tough. The headwinds the RMB faces “in the short term” include “capital controls imposed by the Chinese government” and “ongoing concerns over the Chinese currency’s depreciation.”

“There is opportunity for China to use the RMB as a currency” for these projects, and Chinese companies could “potentially move to transactions denominated in RMB,” SWIFT’s report said. “Not unexpectedly, banks are stepping up to take advantage of the shift.”

“China is also pushing countries along the BRI to allow greater usage of the RMB, though countries are not always responding favorably,” SWIFT says, thus listing another headwind for the RMB: Resistance from other countries.

China is known to be patient and can measure progress in decades, rather than in quarters. But the progress of the RMB’s internationalization must be nerve-wracking slow, even for China.

There are now 486 electric-vehicle manufacturers in China, triple from two years ago. Most will disappear. Read... China EV Manufacturing Bubble Faces Getting Bludgeoned

59 comments for “China Tries to Muscle in on Dollar as Dominant ‘Payments Currency,’ But It’s a Thankless Slog”