“The worst labor market” on the planet: unemployment exceeded 20% in three downturns over the past 35 years.

Spain’s unemployment rate ticked up by a quarter percentage point to 14.7% in the first quarter of 2019, when economists had expected a down tick, as the number of people claiming unemployment benefits increased by 50,000 to 3.35 million, according to data released by the National Statistics Institute (INE). Although it’s not unusual for unemployment in Spain to tick up during the first quarter, this is the biggest quarter-on-quarter increase in six years and it highlights a persistent weak link in an economy that has done nothing but grow since late 2013.

The biggest job losses were registered in the services sector (69,000), followed by industry (8,600) and construction (2.500), raising concerns that the generalized economic slowdown affecting the European economy has spread to one of the region’s fastest growth engines. There are also fears that the recent slowdown of Spain’s tourist boom could lead to a larger cull of local jobs than usual this year.

But there are still some silver linings. Economic growth in Spain may have slowed in recent quarters but it’s still chugging along at an annualized rate of around 2.4%, among the highest growth rates in the Eurozone. And while unemployment may have grown in the first quarter of 2019 at the fastest rate since 2013, the Spanish economy did manage to create 596,900 jobs over the previous 12 months, the highest figure of job creation for a one-year period since the summer of 2007, before the start of the economic crisis. And things are clearly better than they were six years ago when official unemployment in Spain was an eye-watering 26%.

In the words of Javier Diaz Gimenez, a professor of economics at IESE Business School, Spain can justifiably “brag” of having “the worst labor market” on the planet. “It’s very hard to find labor markets that have been able to break the 20% unemployment barrier three times in the last 30 (or so) years,” he told Forbes (chart via TradingEconomics): 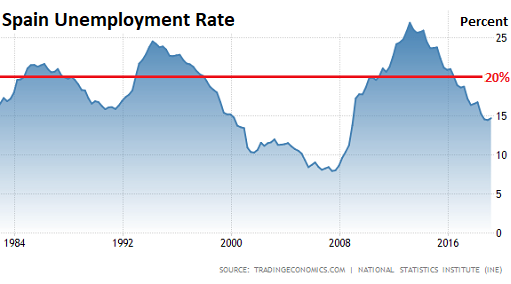 Even during the glory days of Spain’s mind boggling real estate bubble, when more new homes were being built in Spanish towns, cities and coastal resorts than in the UK, France and Germany combined, unemployment never got below 7%.

Just one out of 36 OECD member countries has a higher unemployment rate than Spain, and that is Greece, with a rate of 18.5%. Turkey, which is in the throes of a full-blown political, economic and currency crisis, has seen its unemployment rate spike from 9.8% in May last year to 14.7% now, same as Spain.

When it comes to youth unemployment Spain also comes in second worst out of 36 OECD economies (again, after Greece), with a youth unemployment rate of 34.4% — more than double the Euro Area average. It’s no mean feat given the hundreds of thousands of young Spanish workers who have left the country for greener pastures since the crisis, including an estimated 10% of its homegrown scientific researchers.

There are many, often deep-seated reasons why Spain has such a bad rep when it comes to unemployment. Here are four of the most important ones:

Mass destruction of construction jobs. During the lead up to the financial crisis, Spain’s construction and housing industry generated 13% of total employment and 12% of GDP. But when the bubble burst more than half of those jobs, many of them full time and well paid, were wiped out. Today, the sector employs just 1.21 million people.

Huge informal sector. Spain, like Greece and Italy, is home to a vast submerged economy where hundreds of thousands of workers have no contracts and pay no taxes or social security. As such, the number of unemployed — while still high — is almost certainly smaller than official figures suggest.

Acute seasonality of today’s biggest jobs generator, tourism. As the construction sector has declined, the tourism and hospitality industry has taken its place as the biggest employment generator, accounting for 13.7% of all jobs in 2018. But workers in the sector earn a median wage of just €14,000 — 48% less than their counterparts in the construction industry before the crisis. And most of the work is more precarious due to the seasonal nature of tourism. According to El Pais, almost one out of every three jobs in the tourist industry is temporary.

Bipolar nature of Spain’s labor contracts. Employment contracts for permanent jobs in Spain are exceedingly rigid and extravagantly generous when it comes to redundancies, with workers receiving up to 45 days’ severance pay for each year worked. This makes it prohibitively costly for companies to lay off workers. To gain some degree of hiring flexibility and reduce fixed costs, companies often use temporary contracts. Many abuse them. The inevitable result is a two-track labor market that encourages employers to create precarious, short-term jobs and discourages them from hiring young people as permanent employees. According to the European Commission, Spain has the highest share of temporary jobs (26%) in the EU.

Until this bipolar nature of Spain’s job market is addressed head on, unemployment in Spain is unlikely to fall much lower than its current rate, as the IMF recently warned. Which means that when the next downturn hits, it probably won’t be long before that 20% barrier is surpassed once again. By Don Quijones.

30 comments for “Unemployment in Spain Still Miserably High Despite Six Years of Economic Growth. Now it Ticked Up Again”