What’s the Fed Trying to Say?

My fancy-schmancy Fed Hawk-o-Meter jumped 18% from 22 to 26, after having been on a downtrend for four Fed meetings in a row. Something’s up.

The Fed Hawk-o-Meter checks the minutes of the FOMC meetings for signs that the Fed sees the economy as strong and that rates should rise; or that the economy is OK but not strong enough to raise rates further; or that the economy is spiraling down to where rates need to be cut. It quantifies and visualizes what the Fed wishes to communicate to the markets by counting how often “strong,” “strongly,” and “stronger” appear in the minutes to describe the economy. In the minutes of the March 19-20 meeting, released this afternoon, those words appear 26 times, up 18% from 22 times in the prior minutes: 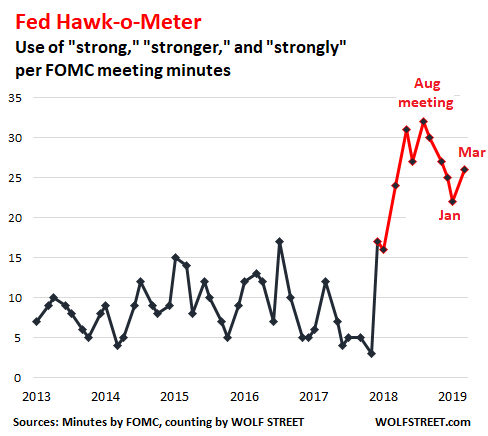 The average frequency per meeting minutes of “strong,” “strongly,” and “stronger” between January 2013 and December 2017 was 8.7 times. The 26 mentions in the March-meeting minutes were 226% the pre-redline average.

The 18% jump in the March minutes from the January minutes is particularly striking because the Fed had spent the prior four meetings backing off ever so gingerly its bullish assessment of the economy. But in March, the direction changed.

Yet the reading still hasn’t jumped back to the peak levels of last August, when the Fed, with the economy running red hot, was telling the markets that it would raise rates four times in the year.

The current reading of 26 is just above the average over the past 11 meetings minutes of 25.2, starting with the December 2017 meeting, when the Hawk-o-Meter started redlining.

“Patient” was introduced with one mention in the December-meeting minutes: “The Committee could afford to be patient about further policy firming.” In the January-meeting minutes, “patient” was escalated to a cacophonous 13 mentions. It was all over the minutes in mind-numbing repetition.

But in the March-meeting minutes, “patient” was harshly slashed to just seven mentions. That’s a 46% reduction!

And the potential end of “patient” gets escalated.

Two of these seven mentions of “patient” pointed at potential U-turn, saying that “patient” was not a permanent institution but rather something that might be transitory:

These two mentions of the potential end of “patient” was an escalation of just one such mention in the January meeting minutes.

It seems, according to my fancy-schmancy Fed Hawk-o-Meter, the March-meeting minutes have a message for the markets: The Fed is back-pedaling its over-reaction to the December market turmoil, now that markets have become euphoric all over again and that credit has become super-easy again.