World trade volume, which had been growing at a strong pace last year, peaking at 5.6% year-over-year growth in October, started turning down in November, and by February — according to the Merchandise World Trade Monitor, released today by CPB Netherlands Bureau for Economic Policy Analysis — it was down 3.4% from the peak in October and down 1.1% from February a year earlier.

The less volatile three-month moving average sank for the fourth month in a row, and is down 2.4% from the October peak and down about 1% from a year earlier. This kind of decline in world trade just hasn’t happened since the Global Financial Crisis: 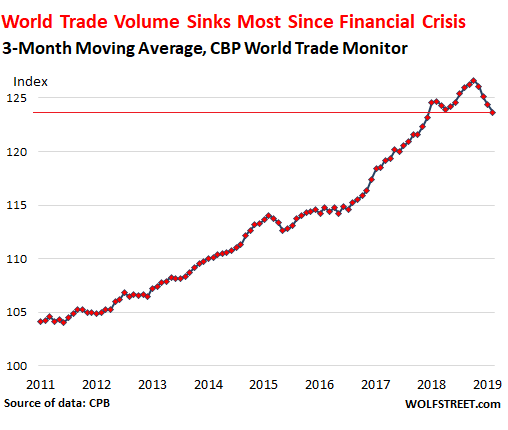 Exports by this economically vast and rapidly growing region fell 8.3% in February from a year earlier, after having zigzagged lower for months, according to the World Trade Monitor. This data is volatile with large month-to-month ups-and-downs. The three-month moving average, which smoothens out some of that volatility, dropped 5.6% from a year ago: 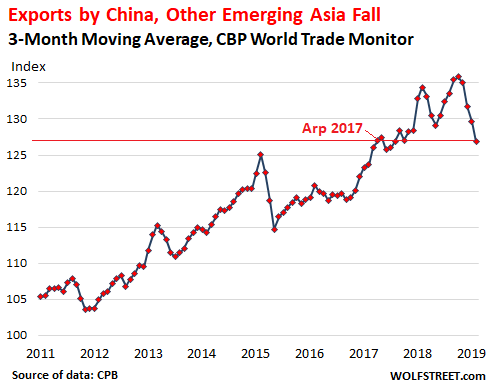 Imports by China and the rest of Emerging Asia fell 3.6% in February, compared to a year earlier, according to the World Trade Monitor. The three-month moving average dropped 2.8% from a year ago and was back at the level of November 2017: 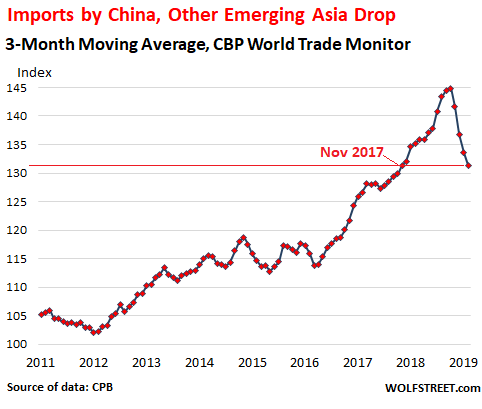 “Emerging Asia” is dominated by the giant economy of China. And these falling imports add to the signs of suddenly and sharply weakening demand in China. But part of the imports are materials and components that go into goods to be exported, and the decline in exports from the region says a thing or two about demand from outside the region.

US trade growth is split. And there is nothing unusual in the charts. The index for imports by the US, after hitting a record in December, dropped in January and inched down further in February. In terms of the three-month moving average, the index for imports in February was just a tad off its all-time high in January, and up 2.3% year-over-year.

But the US index for exports had peaked in June 2018 in terms of its three-month moving average, and as of February was 2% below that peak. This decline was only about half the decline in 2015 and 2016.

Eurozone trade is stagnating. Imports have been stagnating since about November 2017, with the three-month moving average going up and down within a tight range. In February, it was up just a tad from a year ago.

Eurozone exports peaked in January 2018, then dropped and have been stagnating in a tight range, with the three-month moving average down a tad year-over-year and is 1% below its peak of January 2018.

Japan trade is in a down-trend. The index for imports by Japan has dropped four months in a row. The three-month moving average is now a tad below where it was a year ago.

The index for exports by Japan peaked in January 2018 and has trended down since then, with the three-month moving average in February down 2.6% from that peak.

Exports have been rising solidly since April 2017 but then in August 2018 started spiking. The three-month moving average, after a record January, dipped in February, still the second highest value of the index. This spike through January is extraordinary since the Financial Crisis: 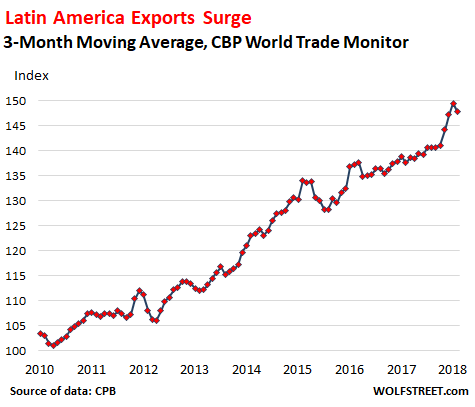 So what is going on here, with Asia trade dropping steeply, as exports from Latin America are spiking? One of the possibilities is that Latin America, particularly Mexico, is starting to pick up some of the trade the US had with China.

But Latin America’s trade strength is only a smallish factor in the global scenario. And at the global level, trade is skidding, despite strength in some corners, and possible shifting of trade from one region to another.

So each country and each economic region has its own dynamics. But of the four largest economic areas, US trade is the cleanest dirty shirt, so to speak with a mixed performance, while Eurozone trade is stagnating, Japan’s trade is in a down trend, and Emerging Asia’s trade is declining at a worrisome pace.