The ruse that helped shares jump 20%.

It would be a joke for a small niche automaker, specialized in luxury cars, with a global market share of less than 1% to get this kind of global attention. But Tesla is unique because of its extraordinarily ludicrous stock price. Though that price has come down by about 32% from its peak in June 2017, it’s still ludicrously high. More on that in a moment.

We’re going to skip over all the glossy stuff and go straight to the financial statement, more specifically to the bottom line of the income statement, where Tesla reported a zinger of a net loss of $702 million, its third-worst quarterly net loss ever. We note here that part of Tesla’s business model is to sell taxpayer-funded pollution credits to other companies, but they’re not fully disclosed until Tesla files its 10-Q at a later date: 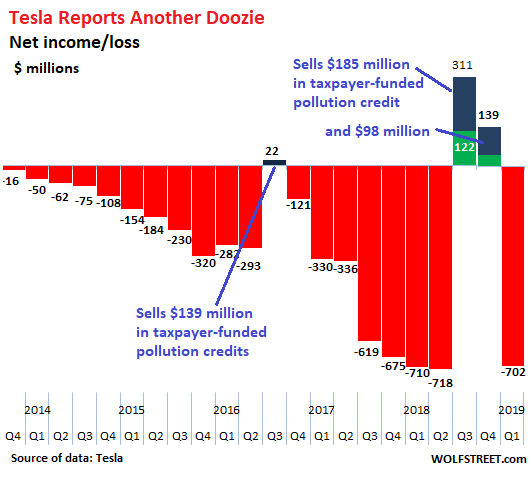 The ruse that helped shares jump 20%.

These pollution credits are pure profit. For Q1, Tesla disclosed only $15 million of these credits. For the full disclosure we have to wait until Tesla files its 10-Q report for Q1 at a later date, when no one pays attention.

For example, in the miraculous third quarter last year, Tesla reported a profit of $311 million on October 24, and all the world was left speculating and digging into how it accomplished this. At the time, it disclosed $52 million in “regulatory credits,” as it calls them. But then on November 2, Tesla filed its 10-Q for that quarter, disclosing that $189.5 million of its $311 million in profits had come from the sale of those “regulatory credits,” a much larger amount than typical.

Reporting a $311 million profit and not fully disclosing that $189.5 million were regulatory credits, some of which it may have saved up from prior quarters, was an artful ruse that worked because its shares jumped by 20%. Tesla would do anything to get its shares to jump because the convertible notes were coming due – but that’s another story that didn’t pan out.

In terms of Q1 2019, we don’t know yet the full amount of the “regulatory credits” that were included in its Q1 results that lowered its net loss to $702 million.

But kudos on revenues.

But global deliveries of the Model S and Model X plunged 45% year-over-year, and 56% quarter-over-quarter to merely 12,091 in Q1. Just looking at the numbers, and not knowing what miracles the company has up its sleeve, I’d say there’s a wee bit of a problem.

Operating expenses were nearly flat, at $1.09 billion, up 6% from Q4 and up 3% from a year ago, thanks perhaps to the cost-cutting and mass-offs.

Operating cash flow in Q1 was a cash drain of a negative $919.5 million, more than wiping out that mysterious $909.5 million positive cash flow in Q4, but was slightly less catastrophic than the $1.05 billion cash drain in Q1 last year.

Tesla said it had $2.1 billion in cash on hand at the end of March, down from $3.7 billion at the end of December, so it better come up pronto with some positive cash flow or it will have to ask investors for more money to burn.

Lots of debt and a deep-junk credit rating.

The company has $22 billion in liabilities, including these three big items, together nearly $15 billion:

If Tesla were the paragon of profitability and positive cash flow, this amount of debt would not be a big issue. But it’s a paragon of losses and cash burn, and so this debt could turn out to be an issue. Moody’s rates Tesla “B3” — six notches into junk and considered highly speculative (my cheat sheet for the corporate credit rating scales of Moody’s, S&P, and Fitch).

Nevertheless, Tesla’s share price has continued to blow out rational minds, even after its 32% drop from the top of the spike in June 2017. The company has a history of nothing but annual losses and cash-burn, and “production hell,” as its chaotic CEO Elon Musk called it so aptly, is standard operating procedure. It has a global market share of less than 1%. And yet, at the price of $258.66 a share at the close today, Tesla has a market capitalization of $44.7 billion.

By comparison, GM – and I’m no fan of GM at this price – which made $48 billion in net income over the past four years and whose revenues of $147 billion in 2018 were seven times the size of Tesla’s, has a market cap of $56.6 billion. And at peak Tesla nuttiness, there were long periods when the market cap of Tesla exceeded that of GM. 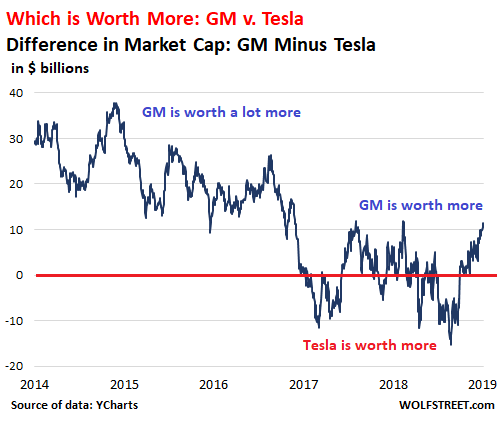 On December 13, 2018, Tesla’s market cap exceeded GM’s by over $15 billion. Then it swung the other way. Currently, GM’s market cap exceeds Tesla’s by $11.5 billion. But the silly thing is that they’re even in the same ballpark – testifying to just how crazy this market has become.

There are now 486 EV manufacturers in China, triple from two years ago. Most will disappear. Read… China EV Manufacturing Bubble Faces Getting Bludgeoned

76 comments for “Tesla Reports Another Doozie”