Growth in the service sector backs off from red-hot spurts last year but remains strong.

Based on 30-day federal funds futures prices at the moment, the market sees a 57% chance that the Fed will cut rates one notch or more by its December 11 meeting. The market sees no measurable chance of a rate hike. The Fed would generally cut rates because the economy gets in trouble. So let’s see.

The services sector, accounting for about 70% of the US economy, has been backing off from the red-hot spurts experienced for brief periods in 2018 that had been similar to the red-hot growth spurts in 2015. In both 2015 and 2018, “real” GDP (adjusted for inflation) grew 2.9%, the fastest growth since the Great Recession. And the latest data shows that the economy is now reverting from the top of the range to the middle of the range.

The ISM Non-Manufacturing Index, at 56.1, shows solid growth but has been backing off from the red-hot growth spurts in September, October, and November 2018, when index levels had exceeded 60. The index also exceeded 60 in October 2017, and in July 2015. So these 60+ readings are not very common. Now the ISM Non-manufacturing Index is back in its post-Financial Crisis normal range.

The IHS Markit US Services PMI, at 55.3, “signaled a further strong expansion in business activity across the US service sector,” the report said. “The rise was slightly softer than that seen in February, but was nonetheless supported by a solid increase in new orders and a further upturn in new business from abroad.”

The chart below shows both indices: the ISM Non-Manufacturing Index (blue line, via Investing.com, back to 2009) and the IMS Markit Services PMI (green line, via YCharts, back to 2012). I marked the two top growth years in red, 2015 and 2018, when GDP grew 2.9%; and the slowest growth year in black, 2016, when GDP eked out a gain of just 1.6%, as goods-based sectors entered a downturn that was accentuated by the effects of the oil bust. In March 2016, the IHS Market PMI dipped below 50, and therefore into contraction mode. But it didn’t last, and the services sectors took off again: 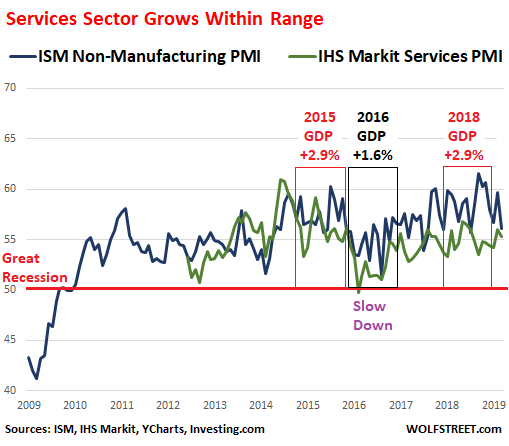 Both the ISM Non-Manufacturing PMI and the IHS Market Services PMI track the vast services economy in different ways and they don’t include all the same sectors.

So I did something that I should have known better not to do, but I was home alone, so to speak: I averaged out both indices (adding the data points of both indices for each month going back to 2012 and dividing the results by two). This removes some of the noise and shows the trend more clearly, including the slowdown in growth of the services sectors in 2016, and the reversion toward the middle of the range of growth that set in after the 2016 slowdown: 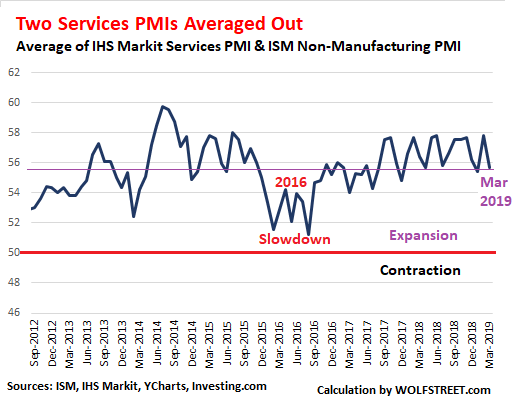 Beyond the overall ISM Non-Manufacturing PMI are the sub-indices. Of the top three sub-indices, two showed slowing growth:

And one showed accelerating growth.

Of the 18 individual sectors that the ISM index covers, 16 showed growth in March, and two contracted (educational services and retail trade).

The rise in new orders was attributed to greater demand from new and existing clients. Although the pace of growth was slightly below the series trend, it was one of the strongest seen over the last five months. Meanwhile, new export business increased for the second month running, often linked to the acquisition of new clients.

Backlog of work grew for the third month in a row, and “the rate of backlog accumulation was the joint-fastest since November 2014 and solid overall.”

But the outlook for output over the next 12 months was clouded by “concerns surrounding uncertainty regarding global trade tensions, economic growth worries and more intense competition. The level of optimism dropped to the lowest since December 2017 and was muted overall.”

And job creation “slowed to the weakest since May 2017, linked in part to lower business confidence.”

So it’s this kind of scenario where not everything is hunky-dory, but overall activity is on track for solid growth, with real strengths in some areas and weak spots in a few others.

If service activities weaken, as they did in 2016, the Fed will get nervous about the economy. But if service activities stay in the range where they are currently, the Fed may feel emboldened. Even the doves on the FOMC have expressed their belief that with this economy, the time is not right for a rate cut. And others, given this economy, have put a rate hike on the table. And the services sector will be key as the plot develops.

In the manufacturing sector, there is weakness globally, but the US, the cleanest dirty shirt among the giants, is hanging in there, thought its shirt is getting dirtier. Read...  US Still Cleanest Dirty Shirt Among Manufacturing Giants, Germany Drops to Debt Crisis Levels, Japan Contracts, China Counts on Government Bailout of Private Sector

57 comments for “Market is Delusional: This is Not a Rate-Cut Economy”