From “capacity panic” to “overcapacity” in less than a year?

This is one of the most cyclical industries, with legendary boom-and-bust cycles: Orders for Class-8 trucks plunged 67% in March compared to March last year, to 15,200 orders, the lowest March for orders since 2010, according to FTR Transportation Intelligence. These are the heavy trucks that haul consumer goods, equipment, commodities, and supplies across the US. This plunge comes after orders had already plunged 58% year-over-year in February and January and 43% in December.

The chart shows the percent change of Class-8 truck orders for each month compared to the same month a year earlier. The year-over-year collapse in orders over the past four months are of the same or greater magnitude as those during the last transportation recession in 2015 and 2016: 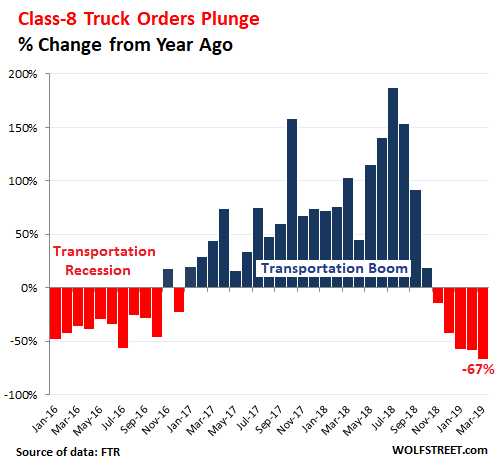 The recipients of these orders are the truck manufacturers Peterbilt  and Kenworth (divisions of Paccar); Navistar International; Freightliner and Western Star (divisions of Daimler); and Mack Trucks and Volvo Trucks (divisions of Volvo Group).

The industry is notorious for over-ordering, which then, once these trucks are built, leads to overcapacity, at which point freight rates take a hit. Trucking companies see this coming and slash their orders in advance. Hence the bust that inevitably follows the boom.

The last transportation recession in 2015 and 2016 led to waves of layoffs at truck and engine manufacturers. But at the moment, truck manufacturers are sitting on what was a historic backlog of orders dating from the phenomenal boom that peaked last August at 52,400 orders, as this chart of total monthly class-8 truck orders shows (data via FTR): 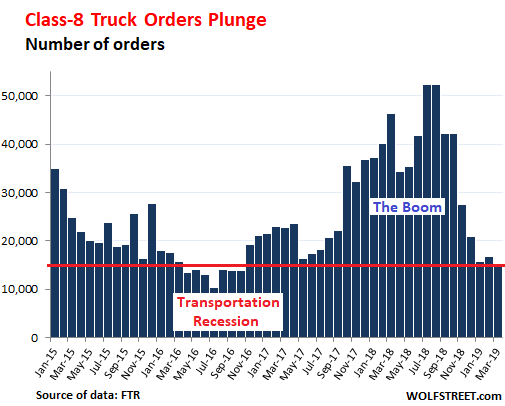 With the plunge in orders over the past five months, manufacturers are burning through their historic backlog, “as the market tries to rebalance and establish some semblance of normality,” FTR points out.

“These are extraordinary market conditions,” said Don Ake, VP of commercial vehicles at FTR. “Most fleets ordered well in advance of their need for trucks in 2019. OEM production slots were scarce in 2018 and supplier constraints caused disruptions in supply, so fleets didn’t want to get shutout this year. Now so many build slots have been reserved, fleets that are currently placing orders for delivery this year don’t have many options.”

“Even though the economy and freight growth appear to be slowing, it has not impacted OEM line rates as of yet. Fleets are still putting more trucks in service and competing in a still decent freight market. It is expected that Class 8 sales will moderate sometime before the end of the year, as industry capacity begins to catch up with the freight surge that began in 2018.”

Shipments by all modes of transportation – truck, rail, air, and barge – have been trending down for month after blistering record levels last May, and have now dropped on a year-over-year basis for the third month in row, according to the Cass Freight Index. In February, the last data available, they dropped 2.1% from February last year:

The national average line haul spot rate, including fuel surcharges, for van trailers in March dropped 13% year-over-year – from $2.15 per mile to $1.86 per mile, according to DAT.

The dropping line haul rates and rising trucking capacity – after the spike in rates and the capacity panic last year – provides some relief for shippers, such as industrial companies or retailers that had been complaining in their earnings reports about freight rates and shipping bottlenecks.

This relief shows up in FTR’s Shippers Conditions Index, which combines freight demand, freight rates, fleet capacity, and fuel price into an index value to gauge the temperature of the freight market – including trucking, rail, and intermodal – from the shippers’ point of view. 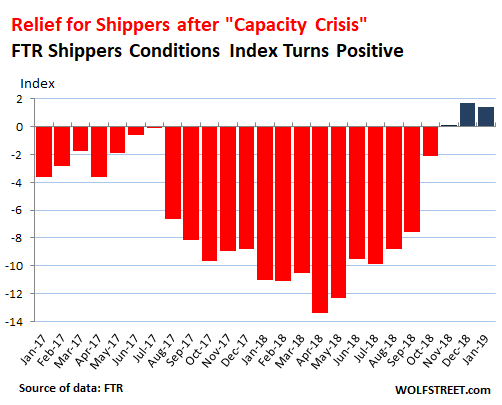 So the trucking industry is letting off some air pressure. Shippers are breathing a sigh of relief instead of complaining in their earnings reports about the bottlenecks and surging freight rates. And truck manufacturers are still exuberant, but keeping a worried eye on their backlog, hoping that the plunge in orders will turn into waves of new orders before the backlog has been exhausted. But given how this has worked out in the past, it is more likely that this historic boom in orders is turning to actual trucks on the road with impeccable timing just when demand from shippers is slowing, and then “overcapacity” will do its magic once again.

Ford wisely kept its mouth shut. The problem with Mercedes and BMW is that they don’t yet sell luxury pickups, though they’re finally figuring it out. Read…  Q1 Carmageddon for GM, Fiat-Chrysler, Toyota, Nissan, Mercedes, Mazda…