Laying off workers and closing plants as exports and production plunge — Jaguar Land Rover is the biggie.

Car production in the UK slumped by 18.2% in January compared to January 2018, after it had already plunged 19.6% in November and 22.4% in December, as a result of sharply declining demand in key export markets such as Europe and China.

January was the eighth consecutive month of declining car production in the UK, according to the industry group, the Society of Motor Manufacturers and Traders (SMMT). In 2018 as a whole, production fell 9.1% to 1.52 million units, a five-year low for the sector. The chart (courtesy of SMMT) depicts rolling-12-month car production totals: 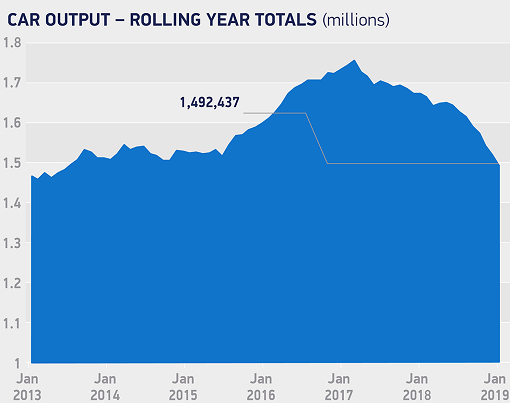 Rolling-year total production hit a post-crisis peak of around 1.75 million units in mid-2016, just after the Brexit referendum. Since then, rolling year totals have fallen 12% to 1.49 million last month, down by over 250,000 units from the 2016 high. “Regulatory changes and ongoing uncertainty over future diesel policy and taxation were exacerbated by declining consumer and business confidence,” the SMMT said.

The manufacturers most severely impacted, in terms of their production declines in 2018 compared to 2017, were:

Just over one in five of the 127,649 cars that came off the production line this January went to the home market, 4.8% fewer than last year. But it was in the export market, accounting for nearly four out of five cars produced in the UK, where the biggest decline was registered. Exports dropped 21% in January, from 119,000 to 97,000, the seventh monthly fall in a row. As SMMT reports, weakening demand in key Asian and European markets drove much of the decline, with exports to the EU27 countries down by 20%, and with exports to China collapsing by 72%.

“The industry faces myriad challenges, from falling demand in key markets, to escalating global trade tensions and the need to stay at the forefront of future technology,” said SMMT Chief Executive Mike Hawes. “But, the clear and present danger remains the threat of a ‘no deal’ Brexit, which is monopolizing time and resources, undermining competitiveness.”

Against this backdrop of heightened uncertainty, fresh inward investment in the sector plunged in 2018 to just £589 million – down by 46.5% from 2017. Three quarters of UK automotive businesses say they fear a “no-deal” Brexit will threaten their future viability, according to a new member survey conducted by SMMT. Half of the respondents say they have already been hit by uncertainty, with one in five having lost business and a third cancelling or postponing UK investment decisions.

Automakers and their suppliers in Europe rely on “just-in-time” and “just-in-sequence” delivery and production systems. A disorderly Brexit has the potential to hugely disrupt these processes. If there has to be a Brexit, car manufacturers would much rather it were based on a withdrawal agreement “that offers breathing space to negotiate ambitious future relationship and frictionless trade,” according to SMMT. In the current state of play, the chances of that happening are wafer slim.

To compound matters, these final nail-biting stages of the two-year withdrawal negotiations are coinciding with the onset of a global manufacturing slowdown that has already hit the economies of China, Japan, Germany, Italy, Spain and the U.S. It’s hardly any surprise, therefore, that the bad omens are coming increasingly thick and fast for the UK’s car sector:

It’s not all doom and gloom, of course. For example, Jaguar Land Rover recently said that despite all its recent travails, it is preparing to make a major investment in advanced manufacturing in the UK, though nothing concrete has yet been announced.

There was also a 49% year-on-year surge in production of commercial vehicles this January after demand from overseas rose 25% and from the UK 97%. That came on the heels of 8.5% growth in 2018. Granted, that was preceded by two years of decline. And, of course, the UK’s output of commercial vehicles (9,182 units in January) is small relative to its car output (120,649 units in the same month). But right now, the UK’s automotive industry — like many other national automotive industries — must take its silver linings where it can find them.  By Don Quijones.

55 comments for “Automakers in the UK Are Not Amused”