A fiasco threatens to spiral out of control.

In the last five trading days, the shares of Spain’s five largest listed banks have re-energized their plunge that had started at the end of January and now amounts to 40%. The cause for the recent drop? A shock ruling by Spain’s Supreme Court that lenders, rather than mortgage borrowers, should pay the contractual tax on mortgage loans, on the grounds that the lender is the only party with an interest in getting the loan certified by a notary, since this is what enables the bank to begin foreclosure proceedings if the borrower defaults on payments.

Even the Supreme Court’s desperate decision last Friday to suspend its own ruling a day after it had announced the ruling, a historic flip-flop that left everything in limbo and its reputation in tatters, failed to stop the rout (data via YCharts): 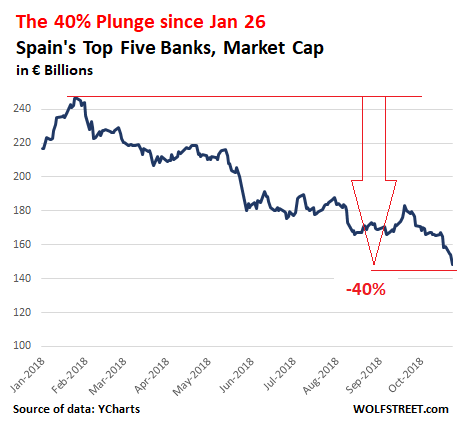 On Monday, the Supreme Court announced that it won’t decide who has to pay the tax on mortgages — the banks or the borrowers — until November 5. In other words, there will be two more weeks of acute legal uncertainty.

This has plunged Spain’s mortgage market into chaos. For years Spanish banks and builders have been desperately trying to breath new life into the market — including, in some cases, by resurrecting 100% mortgages, a high-risk instrument that helped fuel Spain’s madcap property boom. But now, thanks to the pervading legal uncertainty, the market has all but seized up.

On Tuesday, sources from a number of large banks told the financial daily Cinco Dias that the only mortgages being signed are with clients who had already arranged to sign the contract before last week’s furor and who don’t mind paying the mortgage tax. “We’re not signing any new ones,” the sources said.

Banks have said they will continue to apply the previous legislation: i.e., it will be the clients who pay the tax. If they refuse, the banks will offer to postpone the signing until the situation is cleared up. Some banks have even included a new clause in their contracts stipulating that in the event that the Supreme Court rules that the bank must pay the tax, the customer will be reimbursed.

Meanwhile, a group called Association of Judges for Democracy is calling for the head of Luis María Díez-Picazo, the senior judge that suspended Thursday’s ruling. As a result of Díez-Picazo’s “dire mismanagement” of the situation, the association says, concern has grown “among citizens, who don’t know what to do with their mortgages […], and has cast doubts about the impartiality and independence of judges, creating a deplorable image of judges among the public.”

To try to repair that image, the Supreme Court is expected to ratify rather than overturn its previous ruling on Nov 5, while limiting the extent to which it can be applied retroactively, thereby minimizing the banks’ financial pain. According to credit rating agency DBRS, the most likely scenario is that the banks will end up having to pay the tax from now on but without having to reimburse mortgage users the taxes they’ve already paid. Such an outcome could end up costing the banking sector around €700 million a year.

In the second most likely scenario, customers will be allowed to reclaim their tax fees going back four years, which would end up costing lenders an estimated €2.3 billion — roughly equivalent to a quarter of the net domestic profits Spanish banks generated over the last four quarters. In other words, painful but bearable.

In the third, least likely and worst-case scenario, the ruling will be applied retroactively to the past 15 years, the maximum limitation period for civil claims. In such a case, the total bill for Spain’s banks could reach €16.9 billion, according to DBRS — almost the equivalent of 2 years of the banks’ net domestic profits.

The hardest hit lender so far has been Banco Sabadell, Spain’s fifth largest bank, which has seen its stock slump 18% since last Thursday. For Sabadell, 2018 has been an authentic ano horibilis. Besides its mind-boggling and costly IT blunder at its UK subsidiary TSB, Sabadell is also suffering the side-effects of being one of the most exposed European banks to Italian sovereign debt. It is one of the weakest capitalized banks in Spain.

Now add to it the growing uncertainty about its mortgage business. If the Supreme Court’s final ruling, scheduled for November 5, comes out in favor of the mortgage customers and against the banks and the law is applied retroactively, Sabadell’s capital ratio would take another hit. Since Thursday, its shares have plunged 18%, to €1.04, its worst daily close this century.

Sabadell won’t be the only lender to suffer the consequences of an anti-bank ruling. The core capital of other domestic lenders, such as Bankinter and state-owned Bankia, is likely to be hit even harder, while the fallout for Spain’s two largest banks, Santander and BBVA, which are much more globally diversified, is likely to be less pronounced. By Don Quijones.