The chart that makes me scratch my head.

Tesla reported earnings today – a profit, its third quarterly profit ever, and its first profit based on operations rather than the sale of taxpayer-funded pollution credits. So it’s time to reflect.

I have always given Elon Musk full and extra credit for putting electric vehicles on the map and making them cool, after others have tried for about 150 years and failed.

Sales growth has always been strong at Tesla. And it should have been, given how investors and governments have subsidized those sales to the tune of many billions of dollars. Total revenues in Q3, including automotive and energy, jumped 128% from a year ago to $6.8 billion. Nearly all of that growth came from automotive sales as Model 3 sales ramped up.

Gross profit – revenues minus cost of revenues – more than tripled from a year ago to $1.5 billion.

Income from operations – as a result of the surge in revenues minus the lesser increases in costs and expenses – reached $417 million, compared to a loss of $621 million in Q3 last year. That’s a $1-billion swing. 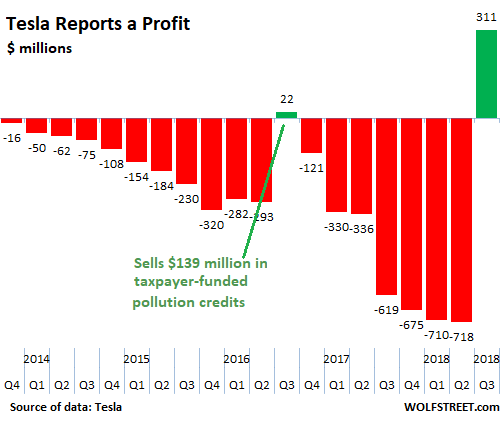 But this chart is a head-scratcher. It’s funny-looking for anyone who has been around business for a while. There is a total and sudden break in trend, without gradual reduction in losses, and without transition of any kind. It just jumps from a sea of record losses to a profit. A magic wand comes to mind.

This was only the third quarterly profit ever. Tesla has never made an annual profit. This chart which goes back to 2014 shows two of them. The one in Q3 2016 was triggered by the sale of $139 million in taxpayer funded pollution credits. It was followed by an even bigger sea of losses.

Digging into the asset side of its balance sheet, comparing Q3 to Q2 (ended June):

This is good stuff. At this pace, if it continues to generate cash like this, Tesla will not need to raise funds.

Accounts receivable more than doubled, not year-over-year, but from Q2 to Q3, to $1.16 billion in Q3, from $569 million in Q2, after having mostly been flat for a few quarters. These are the amounts Tesla is expecting to get paid by the recipients of its merchandise or their lenders. But doesn’t it sell its cars on a cash basis, meaning that it gets paid at around the time of delivery, either from an auto lender or the customer? And its leases are tracked in a separate line item (see below).

Inventories remained flat from Q2 to Q3, at $3.3 billion

Outstanding operating leases of vehicles at $2.2 billion were down a smidgen from $2.3 billion in Q2. And in terms of its solar business, outstanding leases were $6.3 billion, about flat with Q2.

Which takes us back to the doubling of accounts receivable. So who owes Tesla suddenly $586 million more in Q3 than in Q2? And how did that impact revenues? I would like to know.

On the liability side of the balance sheet, accounts payable – money that Tesla owes its suppliers – jumped to $3.6 billion from $3.0 billion in Q2. This makes intuitive sense, given the surge in production, and the bigger bills it has to pay its suppliers.

I’m still scratching my head about the chart above. While I’m at it – wife is watching me askance, wondering if I have lice – I’m thinking about the abrupt departure of Tesla’s chief accounting officer in early September; and the sudden departure of its CFO last year, upon which Tesla brought back its old CFO, and all the turmoil these personnel changes engendered. These are the folks responsible for the financial statements we just looked at.

So I’m a little nervous. There are lot of big changes in these financial statements, largely due to the surge in sales and production, which triggers big changes in the balance sheet. I just need confirmation for a few quarters before I see where this is going.

84 comments for “What I Think about Tesla’s Financials”