Converting used passenger-planes to freighters is a booming business, but overcapacity looms.

Air freight has been hot over the past few years. Just to give an example AirBridgeCargo, the wholly-owned subsidiary of Russia’s Volga-Dnepr Group set up to operate Western-made aircraft, has seen its volume grow from 340,000 tons in 2013 to 700,000 tons in 2017, and this is in spite of everything politics could throw its way.

According to the IATA (International Air Transport Association), goods sent by air cargo amount to less than 1% of worldwide trade volume, but account for a massive 35% of value. It estimates that in 2018 air freighters will move US $6.2 trillion of goods, or 7.4% of world GDP.

Goods shipped by air freight range from climate-controlled containers filled with drugs and vaccines produced in India for the European market to young giraffes raised in South Africa for Asian zoos.

And this business is predicted to grow, a lot. Over the next 20 years, the worldwide market for freight aircraft is frequently estimated to run in the 2,000 to 2,500 units to replace aircraft at the end of their life cycle and to satisfy new demand (this may be optimistic for reasons I will explain in a moment).

This demand cannot be met by new aircraft alone. Boeing, which dominates the market for new freighters, manufactures just 36 767-300F per year, and that’s after doubling previous production due to ebullient demand.

That’s where the conversion of far more numerous passenger aircraft comes in, and will become more and more important.

Passenger aircraft are typically active for 25 years after their first revenue-generating flight. But according to the 2017 IBA White Paper, there’s strong evidence this is contracting. Typically, the first owner, whether airline or leasing company, will withdraw the aircraft from service after 10-12 years and reassess its value.

Sometimes the aircraft is simply put back into service after midlife maintenance. But these days, this is less and less the case. Airlines and leasing companies that can afford to buy the latest, most fuel efficient, and least maintenance-intensive aircraft will do that at first opportunity.

More often, the aircraft are sent to “aircraft graveyards” such as those in the Mojave Desert in California, Tarbes-Pau in France, or Luqa in Malta to await their fate. Usually the aircraft are at first put up for sale “as is,” which in the air-transport industry usually means stripping them of their previous owners’ livery and sealing them against the elements and especially insects.

If a buyer is not found after a certain time (usually about six months), the owners will again reconsider their options.

The first option is to have the aircraft “cocooned,” meaning prepared for long-term storage, hoping that at some point a buyer for the aircraft “as is” will materialize. This is not exactly an attractive option: due to high aircraft prices, it means having lot of capital sitting idly for an unknown length of time.

The second option is to break up the aircraft for spares. This is an attractive option if the owners know there’s very little, if any, market for used aircraft such as theirs. This is the fate that earlier this year befell the first two Airbus A380s to enter commercial service, after their previous owners could not find a buyer.

The third option is to list the aircraft as available for a freighter conversion, which these days is an increasingly attractive option.

The cost of a used passenger aircraft varies hugely, and mostly depends on three factors.

As a measure of comparison, a 13-14 years old Boeing 737-800, one of the workhorses of no-frills airlines such as Ryanair, will set you back $19 million. Boeing is still taking orders for the 737-800 and lists it at around $100 million, with the exact price varying according to cabin configuration and order size. Too good to be true?

Well, no. And yes. Your used 737-800 has at the most 12 years to pay itself back and while finding a certified crew is not a big issue, maintenance may be, at least if you want to keep flying in markets such as Europe and the US, whose aviation authorities have stringent requirements for maintenance of aging commercial aircraft.

Converting an airliner into a freighter is a far more complicated and expensive endeavor than merely stripping it of passenger seats, lavatories, and galleys and cutting a large door in its side (image via Precision Aircraft Solutions): 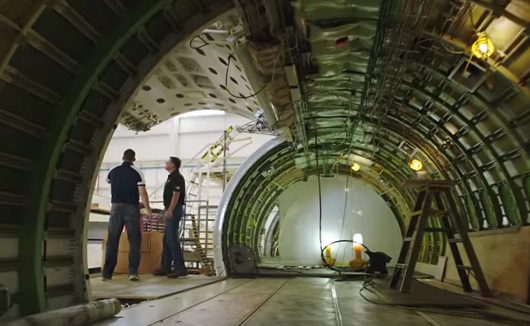 The aircraft needs extensive structural modification, so much it needs a new airworthiness certificate to operate. And since high-level maintenance is routinely carried out during the conversion, sometimes serious issues, such as corrosion or fatigue cracks, may be discovered.

As designing and certifying a conversion is time-consuming and expensive, it is only done if there’s an adequate “feeder stock,” meaning a sufficient number of aircraft out there with enough life left in their airframes to justify the investment.

To give an example of the latter, the last freighter conversion of a Boeing 747-400 was carried out in 2017 by IAI for Asiana Cargo of Korea and most likely will be the last one ever performed: The youngest 747-400s in passenger service are now 13 years old, meaning they have relatively little time left in their airframes to pay their owners back, let alone turn a profit.

The price of a conversion depends on the aircraft itself. For example, converting a 757-200, a favorite of air freighter companies such as DHL, costs about $5.0 million, while converting a 737-400 is $2.8 million.

So far, these “Old Generation” or “Legacy” aircraft have dominated the air freighter market, but over the last five years a lot of effort has gone into designing and certifying conversions for “New Generation” aircraft, such as the 737-800 and several members of the ubiquitous Airbus A320 family. The Boeing aircraft cost $4 million to convert, the Airbus will set you back $5 million.

Carrying out a conversion typically takes three to four months. But overruns seem to become more common these days. This is all the time the aircraft will spend in pieces inside a hangar instead of in the air generating revenue, meaning there’s an additional cost for the owners, usually estimated at around $1 million. If maintenance turns up some nasty surprises, the extra costs can climb all the way up to $2.5 million.

So far freighter companies, especially those operating on the Asian market, have overwhelmingly relied on smaller, cheaper aircraft, the so called “narrowbodies” (with six or fewer passengers abreast in a typical passenger configuration). These include the Boeing 737, but also a plethora of smaller regional airliners such as the ATR 72, Embraer Brasilia, and the Saab 340. While much cheaper to acquire and to convert into freighters, these narrowbodies lack the flexibility of “widebodies” such as McDonnel-Douglas MD11, the Airbus A330, and the Boeing 777.

The rate of widebodies to narrowbodies is expected to change radically over the next couple of decades in favor of widebodies, thanks in part to increased availability of feeder stock as airlines replace their aircraft with newer, more fuel efficient and less maintenance-intensive types.

On the other side of the spectrum, Boeing is presently working with IAI to design and certify a freighter conversion for the 777. The purpose-built freighter variant has so far sold extremely well, especially considering the monster price tag, well north of the $300 million mark, but demand is far outstripping supply so a freighter conversion makes a lot of sense.

There’s also another hidden motive behind this decision: Each 777 converted into a freighter is one less 777 on the used jetliner market, meaning higher chances for Boeing to sell more new aircraft and get some cash from the conversion royalties as well. A win-win situation in short.

Enthusiasm for freighter conversions is so ebullient right now there are already some in the industry openly talking about “Next Generation” conversions, meaning the conversion of the latest generation of passenger aircraft such as the Boeing 737 MAX, which first entered revenue-generating service in May 2017.

But such enthusiasm may be excessive: While there’s already a small market for used Next Generation aircraft – see the Airbus A321neo planes owned by the recently deceased Primera Air of Denmark and now parked in Luqa – it’s less than insignificant compared to the enormous feeder stock of New Generation aircraft that is becoming available at increasingly affordable prices. For example, Ryanair has 450 Boeing 737-800 in service that will be replaced with 737 MAX starting next year. This large number of 737-800s coming on the used market is bound to pressure New Generation used prices over the next three to four years.

While air freight is not as cyclical as trucking, it has been suffering from overcapacity for a while. And in spite of everything, that overcapacity is not going away.

Available Freight Tonne Kilometer (AFTK) is a parameter of travel for “empty” freighters on average. It’s calculated monthly by multiplying kilometers traveled by total available carrying capacity in tonnes, then by subtracting average effective load. The higher AFTK is, the less revenue generating payload aircraft are carrying on average while flying around the world.

Post-2008, AFTK bottomed at 41% in early 2016 and has since been steadily creeping up. It now stands at 46%. It means overcapacity is increasing, not by leaps and bounds like one would have in a recession, a brutal affair which is usually over quickly, but in a steady fashion as new capacity steadily outpaces demand. That is bound to cause serious problems sooner than anybody likes. By MC01, a frequent commenter on WOLF STREET

As companies splurge on the largest ships, consolidation rages, and no one wants to back off, but overcapacity reigns. Read…  The Global Container Shipping Industry since the Hanjin Collapse

56 comments for “What’s Going on in the Used Passenger-Plane Market?”