Overcapacity reigns as companies splurge on the largest ships, consolidation rages, no one wants to back off.

In August 2016, Hanjin Shipping Co., at the time the world’s seventh largest container carrier, sought bankruptcy protection. It was the largest bankruptcy in shipping industry history. On February 2, 2017, the Seoul Bankruptcy Court declared that Hanjin Shipping would be liquidated, as restructuring its debts would be “prohibitively expensive.” But just how big was this debt load?

Hanjin Shipping had originally admitted to the equivalent of $5 billion in debts. Once the bankruptcy court got to work, there were nearly weekly announcements that more debt had been found, tucked away in nooks and crannies of the once glistening edifice. In the end, it was determined that Hanjin, when it entered receivership, actually had $10.5 billion in debts.

Hanjin had been tripped up by, among other factors, a problem that plagues the container shipping industry: overcapacity. And despite Hanjin’s liquidation, that overcapacity is getting a whole lot worse.

As of June 2018, all of the top 13 container carriers bar one had added capacity compared to a year earlier. The lone contrarian was Hyundai Merchant Marine (HMM), which is presently exiting the Transatlantic market altogether and as such is eliminating capacity. But the other 12 big container carriers more than made up for it. Here are some standouts: 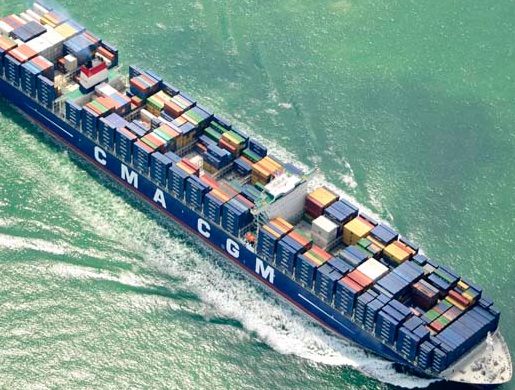 Maersk Line, the largest carrier by capacity, ahead of COSCO, added 10.8% in capacity.

ONE (Ocean Network Express), a brand-new company formed from the container divisions of Japan’s top three shipping companies (Mitsui-O.S.K., Nippon Yusen Kaisha and K-Line) added 7.9%, despite many promises to the contrary.

Including HMM, the average capacity increase for these 13 already huge shipping companies was 8.5%. Including all companies, big and small, container carrying capacity worldwide increased by a 9.3% year on year.

As a result, despite surging transportation inflation worldwide, the China Containerized Freight Index (CCFI), which tracks contractual and spot-market rates for shipping containers from major ports in China to 14 regions around the world, at 821 on Friday, has not fully recovered from its brutal collapse that bottomed out at 636 in April 2016. Before the collapse, it had ranged consistently above 1,000 and periodically above 1,100:

Note that just like the Baltic Dry Index, the CCFI is not a measure of trade volume, but a measure of how expensive (or cheap) it is to ship goods by sea around the world.

Only part of the collapse of the containerized freight rates in 2015 and 2016 was due to overcapacity. Another major factor was the plunge of the price of oil, and therefore of bunker, the fuel for these giant container ships.

With the CCFI well below 1,000 since 2015, while bunker prices have been rising since 2016 along with the costs of emission compliance, profits are being eroded, and momentous changes are sweeping through the industry.

Above mentioned ONE can be considered one of the poster children for this “brave new world”: it started operations on April 1, 2018 (the beginning of the fiscal year in Japan), and during its first quarter of existence has already managed to lose $120 million.

Japanese shipping companies have a time-honored tradition of ignoring losses until they become too large to be ignored, and then there’s always a big scandal followed by an emergency bailout, merger or takeover. So a measly $120 million in losses in a single quarter is of no concern to them.

AP Moller-Maersk, the parent company of Maersk Line, bought Hamburg Süd from Dr Oetker KG of Germany for €4.3 billion. In 2013 Hamburg Süd had attempted a merger with Germany’s other shipping giant, Hapag-Lloyd, but Dr Oetker KG pulled out when a satisfactory financial package could not be agreed upon.

Hapag-Lloyd then merged with perpetually troubled Gulf carrier United Arab Shipping Company (UASC), resulting in a curious ownership situation. Due to previous mergers and share swaps, the largest shareholder of the “new” Hapag-Lloyd is Chile’s Grupo Luksic (20.7%), followed by three that each own 14%: Kuehne + Nagel AG (Germany, run through a shell company in Switzerland); the City of Hamburg; and Qatar’s national wealth fund, QIA. Saudi Arabia’s Public Investment Fund owns 10%. The rest is free float.

This group of shareholders has recently started looking for a further merger, but recent negotiations with CMA-CGM broke off due to anti-trust concerns.

Everyone has been keeping an eye on COSCO. It announced last year to great fanfare the purchase of Orient Overseas (International) Limited (OOIL) of Hong Kong for the equivalent of US $6.3 billion.

OOIL has long been one of the most profitable shipping companies worldwide. The fact that it is majority-owned by the Tung family, one of Hong Kong’s most powerful and richest clans, surely doesn’t hurt.

OOIL’s container division, Orient Overseas Container Line (OOCL), ranked as the seventh largest container carrier by capacity when COSCO put forward its offer. Stock markets uncorked the champagne and the financial media went into the usual hyperbole to sell yet another “deal of the century.” As the purchase process made its way through anti-trust agencies around the world, it seemed like a done deal until April 2018, when it run into two snags.

The first snag is the Trump Administration. In 2011, OOCL struck a deal with the Port of Long Beach to finance a large-scale modernization and expansion of the Long Beach Container Terminal (LBCT) in return for majority ownership. At the time, OOCL was owned by a wealthy Hong Kong family, so nobody raised any objections.

Now things have changed: The Trump Administration has tasked the Committee on Foreign Investments (CFIUS), a panel of experts from 17 government agencies, with deciding if the LBCT constitutes a “strategic asset” and, if so, if it can be owned by a company directly controlled by a foreign government locked in a trade war with the US.

COSCO has already extended an olive branch, offering to sell the LBCT after the merger “at cost” if a buyer can be found. But until the CFIUS issues a ruling, the situation has stalled.

The second snag is the Chinese government itself. Despite being a state-owned enterprise, COSCO had to seek approval for the OOIL purchase from the Anti-Monopoly Bureau in Beijing. Initially it seemed little more than a formality, but deadline after deadline has passed without the Bureau issuing a ruling.

Neither COSCO nor the Chinese government have provided any explanation even after the last deadline, June 30, 2018, came and went. We’re left in the dark as to the motives, but China’s highly complicated power structure and the even more complicated relationships between Hong Kong and Macau “godfathers” and the Mainland government most likely have a hand in it. By MC01, a frequent commenter on WOLF STREET.

Iron-ore exports are dominated by two countries, and imports by three. But everything revolves around China. Read… The Largest Ships in the Huge Iron-Ore Trade