Every housing bubble requires the connivance of the banks and regulators. Australia is no exception.

Sydney’s housing bubble, one of the most magnificent in the world, is deflating further. So far this year, home sales volume has plunged 18.5%, according to CoreLogic. And prices have followed. In September, this is what happened compared to a year earlier:

CoreLogic’s Daily Home Value Index is now down 6.3% from its peak on September 10 last year: 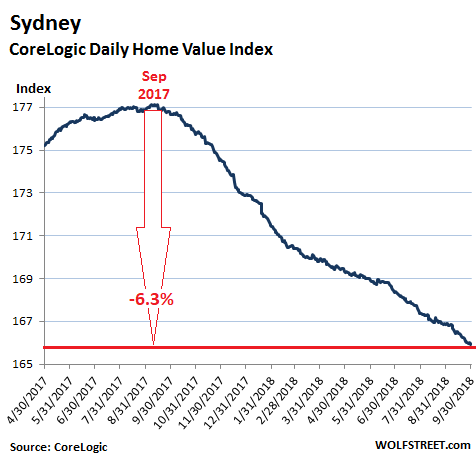 Melbourne’s housing-bubble deflation has been lagging a few months behind Sydney’s but is now catching up. So far this year, sales volume has plunged 15.8%. And prices have followed: Year-to-date, house prices fell 5.1% and unit prices are down 1.5%. Over the third quarter alone, prices fell 2.4% compared to the second quarter, making Melbourne the fastest deteriorating housing market among Australia’s eight capital cities.

For all types of dwellings combined, prices declined 3.4% year-over-year, according to CoreLogic and are down 4.5% from their peak at the end of November 2017: 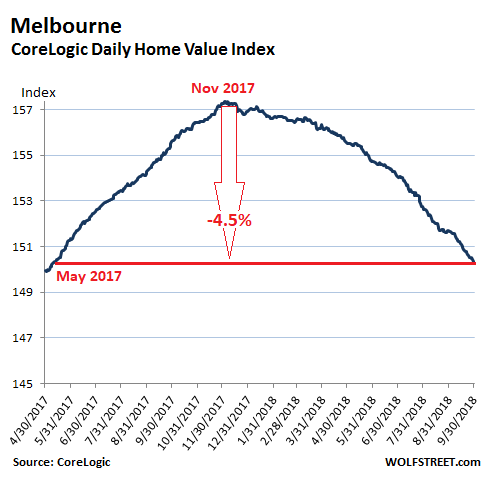 So how big were those bubbles?

“Despite the recent falls in Sydney and Melbourne, dwelling values remain 46% and 40% higher than they were five years ago, highlighting that most home owners in these cities continue to benefit from a substantial lift in wealth from the boom in housing,” explained CoreLogic head of research Tim Lawless in the report. So there’s a long way to go.

Corelogic tracks the largest five of Australia’s eight capital cities in a separate index. Sydney and Melbourne account for about 60% of the national value of housing and weigh the most in this index. Home prices in the remaining three cities in the five-capitals index weren’t hot either in September:

The aggregate five capital cities index fell 3.7% in September year-over-year. It was the 12th month in a row of month-to-month declines. The index is now down 4.0% from its peak in October 2017: 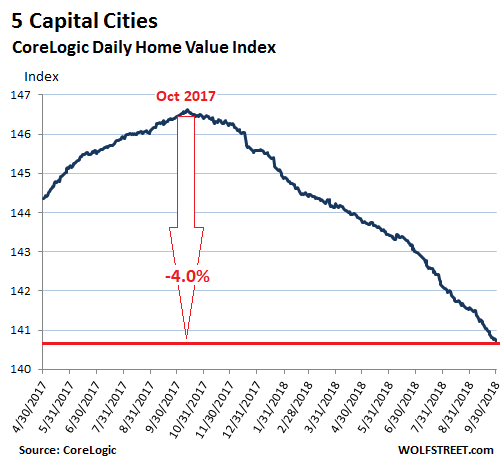 In the remaining three capital cities:

Investors still account for 41% of the value of new mortgage demand, according to CoreLogic. But they’re being hit by new regulations and higher mortgage rates designed to tamp down on investor enthusiasm.

And rental yields have been miserably low: In Sydney, “gross rental yields” – annual rental income of a property as a percentage of the property’s value, not including interest and other expenses – were 3.2% in Sydney and 2.9% in Melbourne.

Subtract interest and other expenses, and it’s a money loser. These losses are mitigated by being deductible from income taxes (“negative gearing”), but they’re still losses, and the only hope for investors under these circumstances is that the property will rise in value. But the opposite is happening now.

Every housing bubble requires the connivance of the banks and their regulators, and Australia is no exception. A banking scandal of enormous proportions has partially come to light via the Royal Commission investigation of the banks and revelations from other sources, as regulators played ball with the banks, and politicians encouraged it. There is nothing like a big housing bubble to make everyone look good and bring in the dough.

But these things can go only so far before the whole edifice – including the banks – is at risk of collapse. So now efforts are underway to get a handle on it and tighten up lending, particularly for speculators and over-stretched households.

Among other items, there is now a new focus on debt-to-income ratios, which pull many households out of the more expensive ends of the housing market, such as in Sydney and Melbourne.

“With the release of the banking commission interim report, there is a chance that already tight credit conditions could tighten even further,” CoreLogic’s report points out:

The constant theme from the report is that regulators should monitor and enforce existing policy much better, while lenders and brokers need to place client interests ahead of profits. This implies a more conservative lending approach going forward which is likely to impact further on credit availability.

The latest credit aggregates from the Reserve Bank show housing credit growth tracking at the lowest level in almost five years, and investor related credit is growing at the slowest pace on record.

If credit conditions do tighten further from here, we can expect housing market activity to follow suit.

But supply of new construction is surging:

With such a substantial pipeline of housing stock in the wings at a time when credit has become less available, investment and foreign buying activity has fallen materially and population growth is trending lower, this could create some headwinds for the market.

This may create some challenges for absorbing newly built housing stock, especially those dwellings targeted specifically towards investors.

The US housing market is now getting hit by rising mortgage rates. The average 30-year fixed-rate mortgage already comes with a 5% rate, and 6% beckons as the next target. Read…  What Will Surging Mortgage Rates Do to Housing Bubble 2?

51 comments for “Update on Popping Housing Bubbles in Sydney & Melbourne”