Those who’re eagerly awaiting the end of the “dollar hegemony,” or the end of the dollar as the top global reserve currency, well, they’ll need some patience, because it’s happening at a glacial pace – according to the IMF’s just released data on the “Currency Composition of Official Foreign Exchange Reserves” (COFER) for the second quarter 2018.

What it confirms: Global central banks are ever so slowly losing their appetite for being over-exposed to US-dollar-denominated assets, though they’re not dumping them from their foreign exchange reserves; they’re just tweaking them.

They’re not dumping euro-denominated assets either; au contraire. But they’re giving up on the Swiss franc. And they remain leery of the Chinese renminbi though they’re starting to dabble in it – it seems at the expense of the dollar.

In Q2 2018, total global foreign exchange reserves, in all currencies, rose 3.2% year-over-year, to $11.48 trillion, well within the range of the past three years. For reporting purposes, the IMF converts all currency balances into US dollars.

US-dollar-denominated assets among these reserves edged up to $6.55 trillion, but given the overall rise of total foreign exchange reserves, the share of dollar-denominated assets among these reserves edged down to 62.25%, the lowest since the period 2012-2013. In this chart of the dollar’s share of reserve currencies, note its low point in 1991 with a share of 46%. And note the arrival of the euro: 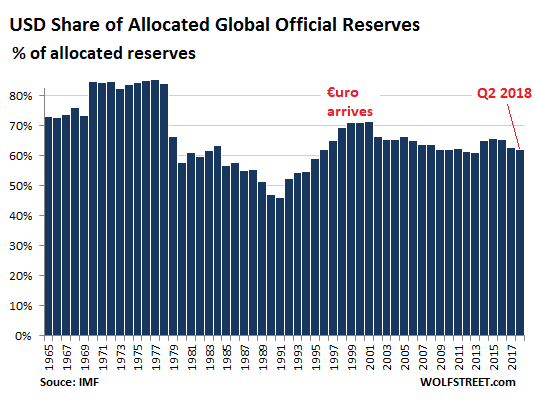 In Q2, the Euro’s share edged up to 20.26%, the highest since Q4 2014. The creation of the euro has been the most successful effort to reduce the dollar’s hegemony. Before the Financial Crisis, and the euro Debt Crisis, the theme in Europe was that the euro would reach “parity” with the dollar on the hegemony scale. But this talk fizzled out during the euro Debt Crisis.

The latest effort at whittling down the dollar’s hegemony is the elevation of the Chinese renminbi to a global reserve currency, as of October 1, 2016, when the IMF added it to its currency basket, the Special Drawing Rights (SDR).

The RMB’s gains make “glacial” appear lightning fast. In the chart below, the RMB is the thin red sliver with a share of just 1.84%, but this is up from 1.39% in Q1, and up from 1.2% in Q4 2017 – minuscule, considering that China is the second largest economy in the world. It seems, central banks remain leery of holding RMB-denominated assets, but they’re beginning to dabble in it. 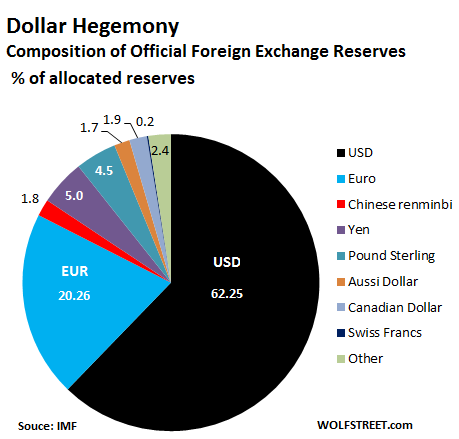 In the chart below, the black line at the top is the hegemonic US dollar, whose share of reserve currencies has edged down. The euro (blue line), at 20.26% in Q2, has been vacillating at around 20% for years. The USD and the EUR combined accounted for 82.5% of the allocated foreign exchange reserves in Q2. The Chinese RMB is the bright red line at the bottom since its inclusion in Q4 2016. It’s just above the Swiss franc and roughly on par with the Canadian dollar and the Australian dollar: 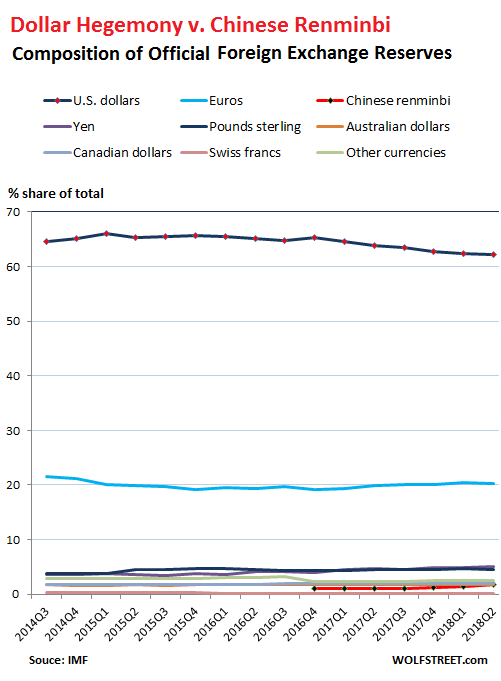 That Trump is bungling the debate on how to deal with the trade deficits became clear when he was getting bashed like a sitting duck from all sides: from Corporate America, China, the EU, other entities that would lose, and their propaganda outlets in the media. Read… What I Wrote to the White House about Trade & Tariffs