This is not good.

What’s causing the drop-off in pending home sales in the US, and in particular in the West?

And it comes amid a sudden urge by homeowners and investors in many markets to put their homes and properties up for sale, while the market is still hot. And just as suddenly the supply is surging, in some of the metro areas by 50% to 90% from a year ago. More on that phenomenon in a moment.

One thing is clear, whatever the cause, the wind has changed in those markets.

In July, pending home sales fell 2.5% from a year ago, according to the National Association of Realtors this morning. It was the worst July in years.

This chart shows the trend of pending home sales going back through 2015, which each July marked. Note the peak of the sales enthusiasm: April 2015, when the index hit highs not seen since before “Housing Bubble 1” collapsed: 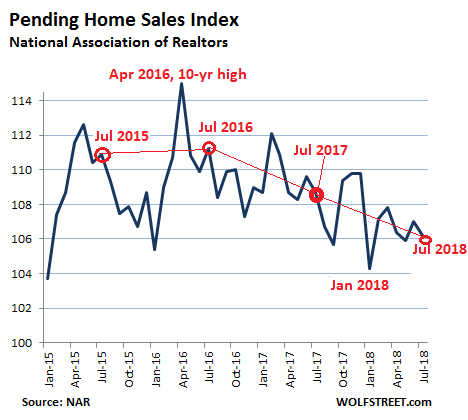 The index, based on a national sample of the transactions handled by the NAR’s members, is a leading indicator for actual sales. It tracks sales of existing homes, but not of new homes. A sale is listed as “pending” when the contract is signed but before the transaction closes, which usually happens within a month or two. Not all deals that are signed close.

The Pending Home Sales Index fell in all four regions, compared to July last year, but note the plunge in the West, fertile breeding ground for some of the most ludicrously overpriced markets in the US:

The report explained: “The reason sales are falling off last year’s pace is that multiple years of inadequate supply in markets with strong job growth have finally driven up home prices to a point where an increasing number of prospective buyers are unable to afford it.”

In 25 metro areas (Metropolitan Statistical Areas as defined by the Census), supply of homes for sale in July skyrocketed by 20% to 90% compared to July last year. Some of the metros showed up prominently in my report yesterday: The Most Splendid Housing Bubbles in America.

Here are some select nuggets. The full list of the 50 metros with the biggest increases in supply is at the bottom.

Number on in the US: In the Santa Rose MSA, in Sonoma County, CA, in the northern part of the Bay Area, supply (active listings) skyrocketed 90%. Two weeks ago, I’ve done an anatomy of its deteriorating “subcutaneous” metrics that precede price decreases and have pinpointed the inflection point of the market in June.

And other select nuggets, scattered across the list of the top 50:

The list below has the 50 Metropolitan Statistical Areas with the largest increases in active listings in July, compared to a year ago. It also shows the median price of the listed properties (half are listed for more, half are listed for less). The data comes from the realtor.com residential listings database.

You can search for metros or cities via the search function in your browser. If your smartphone needs a little help figuring out how to display the table without cutting off the right column (%), hold the device in landscape position.