The price of cheap dollar-debt.

Just when you think Argentina’s financial crisis can’t get worse, it gets a whole lot worse. In order to halt the peso from collapsing further, the IMF, after some serious begging from the government, had agreed to a $50-billion bailout package in June, to be disbursed in increments. In addition, the central bank raised its policy rate in big jumps, reaching 45% on August 13. And in an emergency meeting today, it goosed the rate to a blistering 60%!!

And this is what followed: Yesterday the peso plunged 7%; and today as of midday in Buenos Aires, it has plunged over 17%. That brings the total plunge for the two days to 24%. It now takes 41.3 pesos to buy a dollar. Seen the other way around, a peso is now worth 2.4 cents (down from $1 in early 2002): 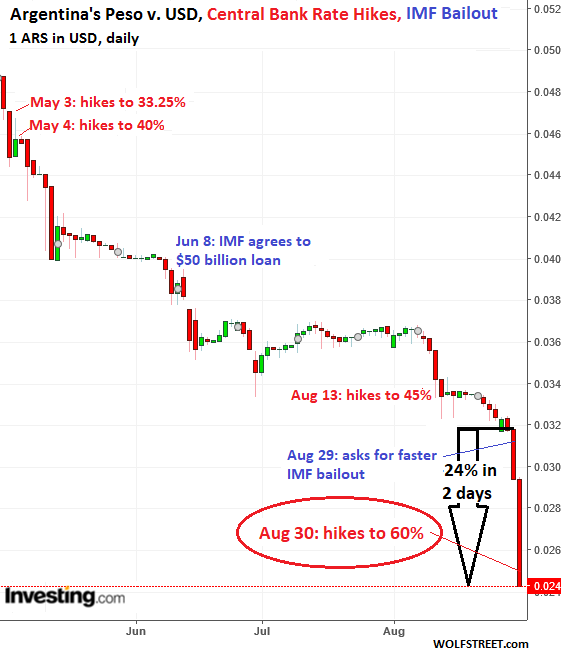 WTF happened? As soon as those IMF dollars started flowing a couple of months ago, the government – the central bank is under the Ministry of Finance and thus integral part of the government – started selling those dollars and buying pesos. But it was the only entity buying pesos, and those dollars were handed to the pesos sellers and thus wasted instead of being invested in the economy.

Now the government is running again low on dollars to sell, and yesterday, it came out that it has asked the IMF for quicker disbursement of bailout dollars so that it could hand them more quickly to the pesos sellers. It was supposed to be a confidence-building measure:

“We have agreed with the International Monetary Fund to advance all the necessary funds to guarantee compliance with the financial program next year,” President Mauricio Macri said on TV yesterday. “This decision aims to eliminate any uncertainty.”

“Over the last week we have seen new expressions of lack of confidence in the markets, specifically over our financing capacity in 2019,” he said.

This is what a currency-and-debt crisis looks like: Argentina has $120 billion in dollar-denominated debt, a chunk of which comes due next year and needs to be paid off, and in order to pay off this debt, Argentina needs to be able to borrow more dollars. This was no problem last year, when it was even able to issue 100-year dollar bonds, but sheer insanity has left the building, and investors have opened their eyes.

This goes back to my old dictum: No one should ever lend dollars to Argentina, not even the IMF. This always ends the same way: in a default.

Financial crises are routine in Argentina. The destruction of its currency is a cost of doing politics, and not an accident.

IMF Managing Director Christine Lagarde replied yesterday that the IMF would “reexamine the phasing of the financial program” as the “more adverse international market conditions” had not been “fully anticipated.”

“Authorities will be working to revise the government’s economic plan with a focus on better insulating Argentina from the recent shifts in global financial markets, including through stronger monetary and fiscal policies,” she said.

But don’t blame currency traders, and the Argentinians that have zero confidence in their misbegotten currency and its historically reckless management. They have reasons to shed those pesos as fast as they get them, including run-away consumer price inflation which in July reached 31.2% for the 12-month period.

And Argentina has a large trade deficit (via Trading Economics): 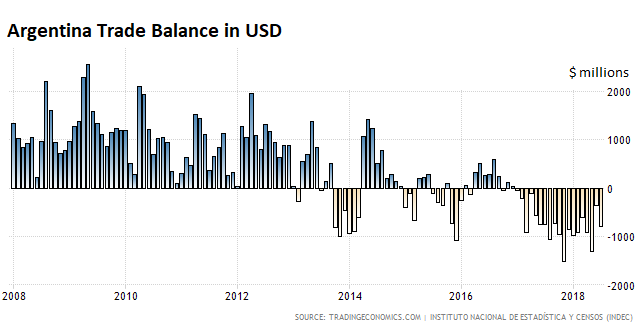 The thing is, a collapsing peso makes imports more expensive in peso terms, which pushes up inflation, which in turn helps crush the peso…. You get the idea.

This is how Argentina has always done it. In early 2002, the peso was pegged to the dollar one-to-one, so a peso could be exchanged for $1. Then the peg was lifted, dollar bank accounts were converted to pesos over the weekend, the peso was devalued, and the government defaulted on its dollar debts.

Since those days of mayhem, the peso continued to plunge. By the time the Macri government took over at the end of 2015, a peso was worth about 10 cents. But it was a pegged currency. Right up front, he lifted the peg and let the peso float, which instantly plunged to prevailing black-market rates – below 8 cents.

Now his government gets to drive the peso down further as Argentina steers toward its next default. This is not new for Argentina. It’s how it does business and politics, and lending Argentina even more dollars to make even more promises it cannot pay for and to import even more stuff and to waste even more dollars on propping up the peso and to bail out existing dollar bondholders is just going to keep the party going a little longer.

Turkey has not followed Argentina’s path of jacking up interest rates and asking for an IMF bailout. But the lira is plunging, and now the economy faces a “substantial increase in the risk of a downside scenario.” Read…  Turkey’s Debt & Currency Crisis Morphs into Financial Crisis as Banks Face Funding Squeeze

66 comments for “What the Heck Just Happened in Argentina?”