“Substantial Increase in the Risk of a Downside Scenario”: Moody’s

The risks are fast multiplying in Turkey’s beleaguered economy. In a clear sign of deterioration, Turkey’s economic confidence index plunged 9% month-on-month to 83.9 points in August, its lowest since March 2009. The country’s currency, the Lira, resumed its downward spiral. And Moody’s downgraded 20 financial institutions in Turkey.

Moody’s cited a “substantial increase in the risk of a downside scenario,” for Turkey’s lenders. The banks affected include a number of foreign-owned subsidiaries such as Turkiye Garanti Bankasi A.S. (half-owned by Spain’s BBVA), Yapi ve Kredi Bankasi A.S. (part owned by Italy’s Unicredit), ING Bank A.S. and HSBC Bank A.S., as well as large state-owned banks like Ziraat Bankasi and Halk Bankasi.

Turkish banks are particularly risk-prone in the current environment due to their excessive dependence on foreign currency funding (emphasis added):

“Turkish banks are highly reliant on foreign currency funding and had market funds of around USD186 billion denominated in foreign currency as of June 2018, equivalent to 75% of their total wholesale funds. This makes the banking system particularly sensitive to potential shifts in investor sentiment, as these foreign currency liabilities must be refinanced on an ongoing basis.”

The more the lira falls against major foreign currencies such as the dollar and the euro, the more difficulties the banks will have funding their operations. According to Moody’s, a serious funding crisis could come sooner rather than later, given that in the next 12 months around $77 billion of foreign currency wholesale bonds and syndicated loans — equivalent to 41% of the total market funding — needs to be refinanced.

“In a downside scenario, where investor sentiment shifts, the risk of a prolonged closure of the wholesale market would lead most banks to materially deleverage, or to require external funding support from the government, or the Central Bank,” Moody’s warns.

Moody’s doom-laden report sparked a fresh rout of Turkish assets, including the lira, sovereign bonds and shares of Turkish banks. Over the three-day period through today, the lira plunged plunged 8.2% to 6.65 lira to the dollar. Over the past four months, the lira has plunged 40%. Seen the other way around, 1 lira is now worth 14.9 cents: 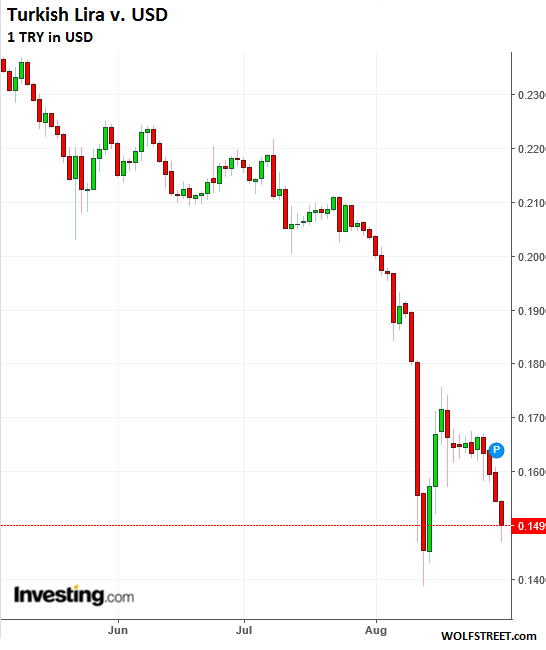 Turkey’s banking index dropped 1.2% to 100.9%, and is now down 20 points from where it was just a month ago. The country’s sovereign bonds also suffered, with the yield on 10-year bonds climbing 19 bps to 21.95%, just a whisker away from the record set earlier this month.

Big holders of Turkish debt are already beginning to feel the pain. They include Spanish banks, which have tripled their holdings of Turkish sovereign bonds in the last five years to a not-insignificant $19.2 billion. That’s still less than a quarter of the €80 billion of exposure — the equivalent of 6.5% of Spanish GDP — Spanish banks have to Turkey’s crumbling economy.

More importantly, Turkey’s mushrooming problems are also infecting investor sentiment across many other emerging markets, spurring losses of over 5% in three weeks for funds owned by giant fund managers such as BlackRock and Pimco. Out of 18 emerging markets Turkey has led losses in August with a 31% slump, followed by a 16% plunge for Argentina, an 11% decline in Russia, and a 10% fall in Brazil, according to Bloomberg Barclays indexes.

Global bondholders are understandably concerned about this trend, especially given that it coincides, and is partly the result of, rising U.S. rates and a firming U.S dollar. These bondholders’ predictable response is to beg the IMF to step in and impose some semblance of order on Turkey’s economy, whose currency crisis has already turned into a debt crisis that is now dragging some rather large European banks through the mire.

What global bondholders ultimately want is for the IMF to lend Turkey money to bail out Turkey’s bondholders so as to put an end to the turmoil and torture in emerging markets bonds, which were selling like hotcakes just eight months ago. There’s one big problem with the plan, however: for the IMF to intervene in a country’s economy, it must first be invited to do so by that country’s respective government — and it usually attaches some unpalatable strings.

There’s no sign that Turkey’s president Recep Tayyip Erdogan will take such a step, for an obvious reason: the strings that would come attached with said loan would put an instant end to the economic growth Turkey has experienced under Erdogan’s rule. The unrestrained borrowing in cheap foreign currencies — a flood mostly of euros and dollars — that has propelled Turkey’s debt levels and current account deficit to such dangerous levels would quickly fizzle out, plunging Turkey into a deep recession, if not depression. And that would significantly erode Erdogan’s popularity.

Erdogan, who now has de facto control over most of the economy’s levers, including the central bank, has also ruled out raising interest rates any further, since that too would dampen economic growth. This has left Turkey’s central bank with virtually no ammo to halt, or reverse, the downward spiral of the currency-and-debt crisis.

On Wednesday the Central Bank of Turkey tried to bolster investor sentiment by announcing that it was doubling banks’ borrowing limits for overnight transactions at the interbank money market, bringing to an abrupt end the unrestricted funding it had offered since Aug. 13. But the measure was a complete flop, registering barely a blip on the Lira’s downward tumble.

“It’s yet more smoke and mirrors from the central bank,” said Nigel Rendell, an analyst at Medley Global Advisors LLC in London. “The change in banks’ overnight borrowing limits is aimed at trying to ease pressures on the banking system, rather than tackling Turkey’s underlying problem, which remains persistently high inflation.” In July inflation reached a 14-year high of 16%.

Until or unless Erdogan bites the bullet by allowing the Bank of Turkey to massively hike interest rates — by as much as 500 basis points according to some analysts — and/or requesting a bailout from the IMF, the problems for Turkey’s economy are only going to get worse as more and more spooked investors flee for the exits, while fewer enter the market. By Don Quijones.

But even if he bites the bullet… Because there’s Argentina: Unlike Turkey, it has bitten that bullet and has just jacked up its policy interest rate to 60% and has agreed to a $50-billion bailout from the IMF in June. And yet its economy is spiraling down and inflation now exceeds 30%. Just when you think Argentina’s financial crisis can’t get worse, it gets a whole lot worse.Read… The Price of Cheap Dollar-Debt: Argentina’s Peso Collapses 24% in 2 Days as Government Begs for Faster IMF Bailout