When we discuss the insane San Francisco housing market, it’s usually in terms of median asking rents ($4,680 a month for a 2-bedroom), the median single-family house price ($1.7 million), the median condo price ($1.2 million), or the Case-Shiller Home Price Index’s 11% year-over-year surge. As different as the data may be, all of the data agrees: San Francisco is a horrendously expensive place to live. But beneath the summary data hides the complexity of a housing market that is now commonly called the “San Francisco Housing Crisis.”

So for the first time, and to get a better grip on the issues, the SF Planning Commission has prepared a “Housing Needs and Trends Report,” or HNTR (12-page executive summary; 88-page full report). The report “represents more than a year’s worth of effort by both Planning staff and consultants to gather and analyze data,” it says. So here are some Key findings:

San Francisco is a city of renters:

Over 60% of all rental units are in “rent controlled” buildings. In SF, rent control only applies to older multi-family buildings. It does not apply to buildings completed after June 13, 1979, and it does not apply to condos and single-family homes that are rented out. In other words, none of the newer housing stock is rent-controlled. Rent control in SF means that when the unit comes on the market, it is rented out at market rent, but annual rent increases from that point on are limited based on a measure of inflation.

A household of two that earns less than 80% of AMI, according to the Mayor’s Office of Housing and Community Development, currently makes $75,750 or less a year.

The Planning Commission’s report pointed out:

9% of households live in about 33,000 affordable housing units, where rents and sale prices are set so that they’re deemed to be affordable at low and moderate-income levels by SF standards. 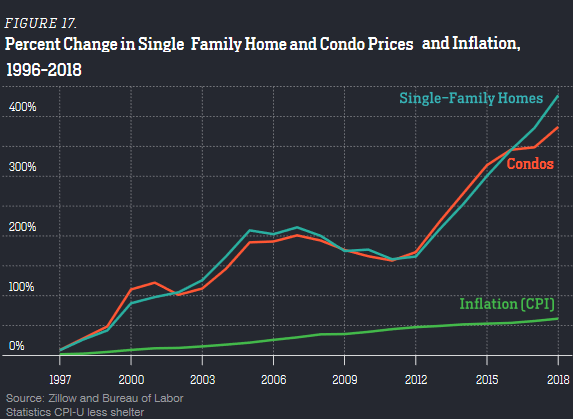 Not lack of supply, but lack of affordable supply:

But of those units built since 1990, 28% are deemed to have been “affordable to low and moderate-income households.”

Cost has an impact on who lives in San Francisco

The number of “low and moderate-income” households earning less than 120% of AMI (for household of 2 = less than $113,650) dropped more in San Francisco than in the region. “This change may be due to households increasing their earnings or it may be because more of these households have left the city, or a combination of both.”

The number of workers who work and live in SF has reached an all-time high of nearly 500,000. 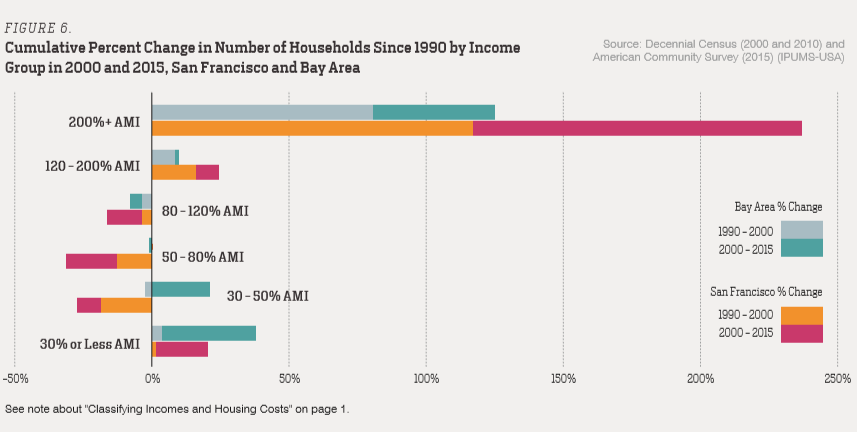 The report finds that “housing cost burden has increased for renters and owners of all income groups, but very low-income households [less than 50% of AMI, or less than $47,350 for a household of 2] experienced large increases in severe cost burden since 1990. Above-moderate income households now face rent burden, which they did not in 1990.”

Households earning less than 50% of AMI ($47,350 for a household of 2) face a situation where housing costs consume 50% or more of income.

The way people make do in SF is by living together:

“San Francisco exceeded the region in the rate of growth for couple households (without children or other family members) and roommate households,” the report said. “These households are also more likely to be higher income as they are able to combine incomes from multiple working household members.”

This is why San Francisco is a place where people with relatively high incomes can feel squeezed. Earning less than 120% of AMI for an individual worker, thus earning less than $91,200 a year,

After the blistering home price spike earlier this year, the big fade has set in. Read…  What the Heck’s Going on in San Francisco’s Housing Market?

75 comments for “San Francisco’s Housing Market, Incomes & Disconnects, According to the Planning Commission”