Its fleet of autonomous cars thus far has gone the way of the Spanish Armada, producing nothing but grief.

By John E. McNellis, Principal at McNellis Partners, for The Registry:

While Uber isn’t exactly driving straight to the bank, it may get there yet. The company has ripped through $10 billion to date, but its latest report (Q1 2018) is sufficiently rosy for investors to buy into a $62 billion valuation. How rosy? Uber is losing lots of money, but only half as much as it did in the first quarter of 2017, a ground-rule double for Silicon Valley.

Digging a little deeper, however, these financials reveal a disquieting fact: While the company’s 2017 earnings were up 70% over 2016, its bookings (total income from rides driven) increased by only 55%, a disparity which suggests that Uber sliced away yet a larger share of the pie for itself, cutting into its drivers’ already meager earnings.

To this point, the Center for Energy and Environmental Policy Research at MIT determined in a March 2018 study that Uber has achieved its success the old-fashioned way, that is, on the backs of its workers. The MIT paper concluded that 74% of Uber (and Lyft) drivers earn less than the minimum wage of the state in which they drive. Uber, however, immediately challenged the MIT findings and, somewhat surprisingly, MIT conceded that its methodology might be flawed (a few key survey questions were unclear) and that different approaches to the same data suggested that Uber drivers earn somewhere in the $8-10 an hour range.

MIT asked Uber to release its own internal data to decide the issue, but the company has apparently refused. While this debate should remind us that ivory tower business studies ought to be viewed with the skepticism accorded papal bulls, this paper is buttressed by the fact that, depending on which unreliable internet source you believe, somewhere between 50% and 96% of all Uber drivers quit every year.

But put aside its drivers’ plight for a moment, take a deep breath, and simply acknowledge that Uber is the best thing to happen to transportation since Henry Ford, with the company’s service being to a taxi what a bicycle is to walking. Uber is a runaway success for its users and, in their myopic view, practically perfect just the way it is.

The company does have a great product and should be highly successful, but its foundation is bad concrete. A pier can be immaculately paved and dotted with sunny restaurants and colorful seashell shops, but if its pilings are rotten, it’s going to drop into the sea. Uber cannot make the transition from promising start-up to stable cash machine with a critically underpaid workforce.

Uber could shore up its underpinnings by cutting a new deal with its drivers, by allowing them to recover their actual costs of driving and a minimum hourly wage before the company takes its 25% share of the gross. It could be a company that not only provides an excellent product, but a great one for which to work (e.g. Costco). A living wage would, however, wipe billions away from the company’s market value, rendering the likelihood of such a transition on a par with Elon Musk actually colonizing Mars.

Or, in the alternative, the company could raise its rates high enough to provide a decent wage under its current revenue-sharing structure. A tad more likely than the previous scenario, this approach still has the drawback that bedevils the entire e-commerce industry, that is, if you charge enough to actually turn a profit, your volume will plummet. And it is the antithesis of Uber’s current global strategy of buying market share through predatory, loss-leading pricing.

Viewed a bit too simply (the way your correspondent once did), Uber might be likened to a three-legged stool comprised of customers, drivers, and the company. A second look suggests a fourth leg — the environment, the cities in which ride-hailing companies are jamming the streets — and why reducing their ubiquity, whether voluntarily or through regulation, may be a good thing. According to the Chicago Tribune, a typical San Francisco weekday has ride-hailing drivers making more than 170,000 vehicle trips, about 12 times the taxi trips, centered of course in the city’s worst congestion. And the American Public Transportation Association’s latest figures show public transit ridership has declined 2.9% during a time when ridership, which follows jobs, would otherwise have been expected to soar; if Uber is cheap enough, people hop off the bus.

Raising rates would benefit drivers and de-clog downtowns a bit as well, but inasmuch as this would come as a major sideswipe to the net worths of its founders, the likelihood of Uber doing this voluntarily is — using the Musk scale — on par with Elon actually making a go of Tesla.

No, it seems that Uber has another future for itself in mind, one free of drivers and their irritating demands, one that, in fact, was colorfully depicted 28 years ago in that sci-fi classic, Total Recall: the fully-autonomous, all-electric Johnny Cab: 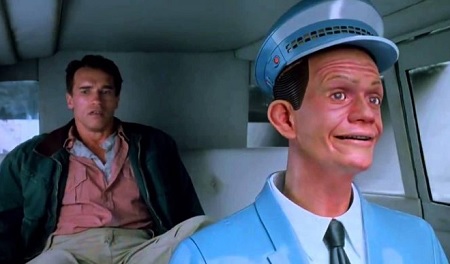 Hollywood-inspired or not, Uber boldly declared the launching of a fleet of autonomous cars more than three years ago. But that fleet thus far has gone the way of the Spanish Armada, producing nothing but grief, with the March 2018 pedestrian fatality in Arizona forcing the company to put the program on hold, suspending all testing.

Had they paid a little more attention to the movie — especially the part where Johnny Cab goes out in a fully-autonomous fireball courtesy of Arnold Schwarzenegger — the Uber overlords might have decided to save the billions they spent on self-driving technology, let someone else tinker with Johnny Cab and simply give their drivers a raise. By John E. McNellis, author of Making It in Real Estate: Starting Out as a Developer. The article was first published on The Registry.

59 comments for “What Future Is Uber Seeing for Itself?”