Historic spikes in Seattle and other metros. But New York condos skid.

Prices of houses and condos across the US surged 6.4% in April from a year earlier (not seasonally-adjusted), and a sharp 1% from March, according to the S&P CoreLogic Case-Shiller National Home Price Index, released this morning. The index is now 8.8% above the nutty peak of “Housing Bubble 1” in July 2006 just before it collapsed, and 50% above the trough of “Housing Bust 1.” Note the disproportionate spike in April: 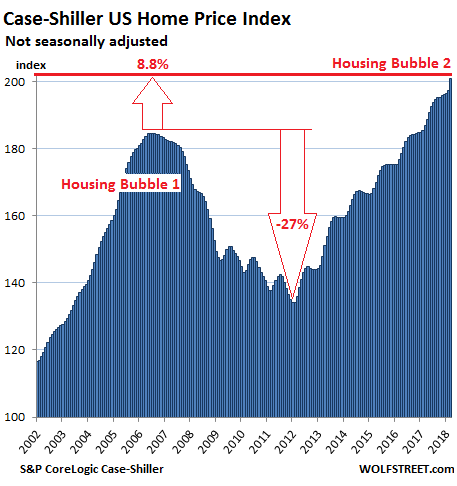 The Case-Shiller Index is based on a rolling three-month average; today’s release is for February, March, and April. The index is  based on “home price sales pairs,” comparing the sales price of a home in the current month to the last transaction of the same home years earlier. The index incorporates other factors and uses algorithms to arrive at each data point. It was set at 100 for January 2000; hence an index value of 200 means prices as figured by the index have doubled.

The Case-Shiller home price index for the Boston metro jumped nearly 2% from the prior month and is up 6.9% from a year ago. During Housing Bubble 1, from January 2000 to October 2005, the index soared 82% before dropping. It now tops that crazy peak by 16.7%. Note the phenomenal 4-point spike in April, the largest such spike in the Boston data series: 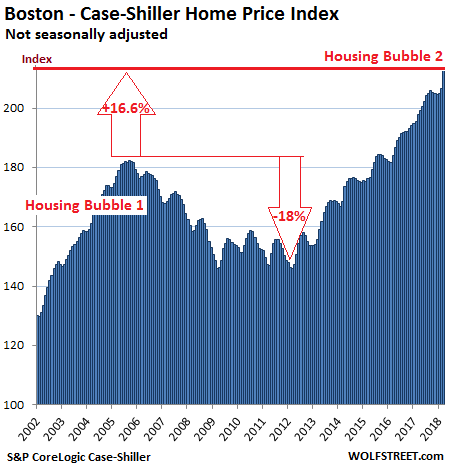 The Seattle metro index spiked 2.5% from the prior month. In terms of points, the index jumped 6.6 points, the biggest monthly jump in the data series. The index has now jumped 13.1% from a year ago and is 31% above the peak of Seattle’s insane Housing Bubble 1 (July 2007). Note the historic spike in April: 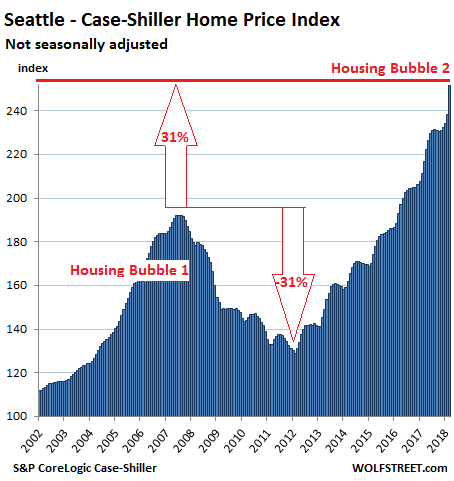 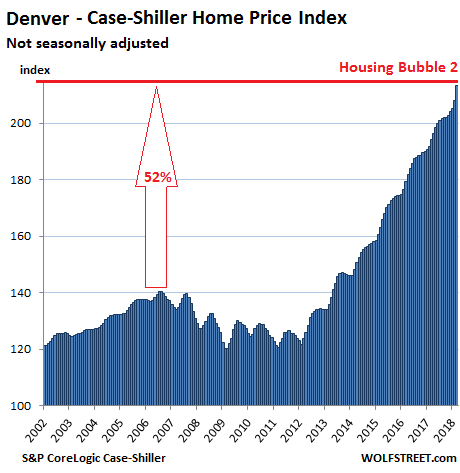 The Case-Shiller home price index for the Dallas-Fort Worth metro rose 0.9% from March, its 51st relentless monthly increase in a row, and 5.7% from a year ago. Since its peak during Housing Bubble 1 in June 2007, the index has surged 46%: 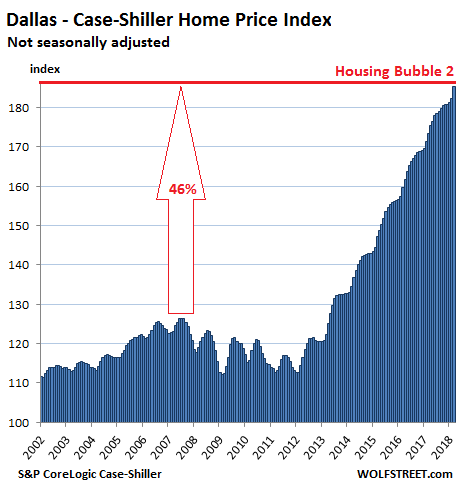 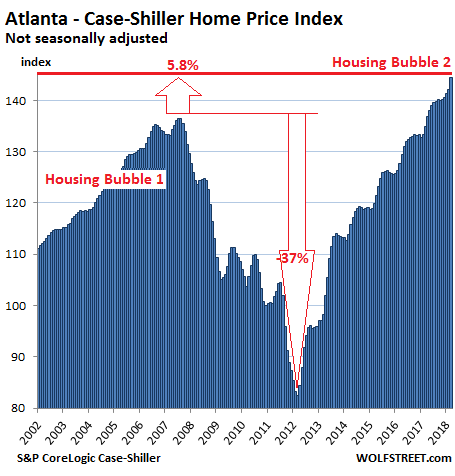 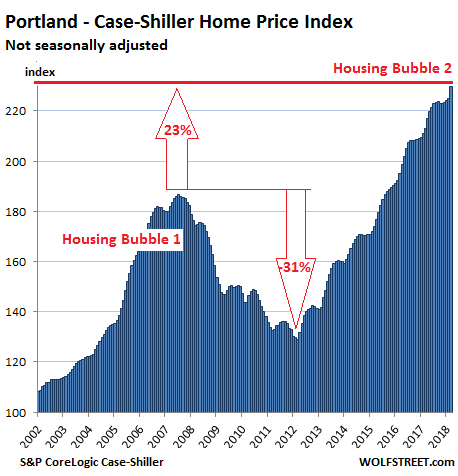 The index for “San Francisco” includes the counties of San Francisco, Alameda, Contra Costa, Marin, and San Mateo, a large and diverse area consisting of the city of San Francisco, the northern part of Silicon Valley (San Mateo county), part of the East Bay and part of the North Bay. The index jumped 1% from March, 11% from a year ago, and 38% from the insane peak of Housing Bubble 1. It’s up 164% since 2000. Note the spike in April: 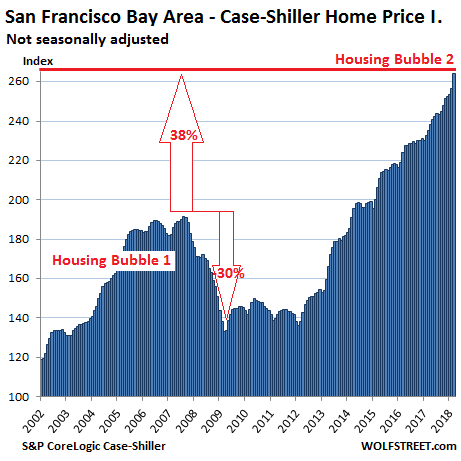 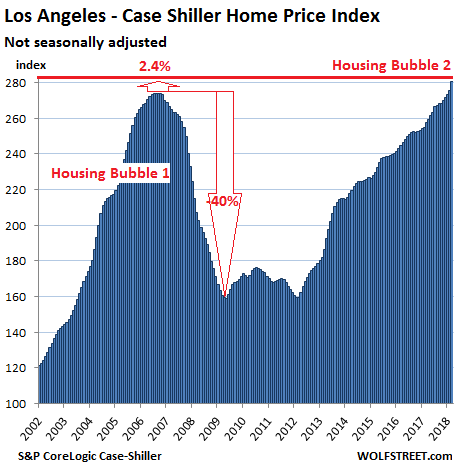 Oh boy, no spike! On this page, the index for condos in New York City is the only index that fell in April from March, down 0.5%. With all the spikes in the other metros, this is practically refreshing. But this index has produced many monthly dips over the years, some of them a lot steeper, that turned out to be blips. The index rose “only” 2.7% from a year earlier and is now 18.5% above the peak of Housing Bubble 1, having surged 175% since 2000: 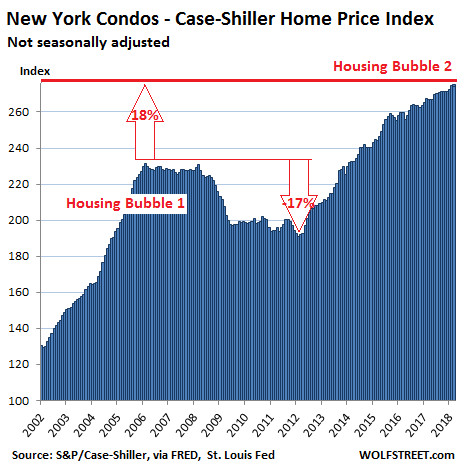 So the index is getting spiky in a number of metros. But Seattle’s beautiful spike is unequaled in the series. These indices get adjusted over the next few months as more data becomes available, so some of the spikes might get toned down a little. This happened before. Or they might get adjusted upwardly. But as it stands, there was a sharp acceleration in some cities over the rolling three-month period for “April” (February, March, April). Some of this may have been driven by home buyers trying to “lock in” mortgage rates before they rise even further.

Despite persistent and false claims to the contrary that are often heard. Read…  Why a US-Style Housing Bust & Mortgage Crisis Can Happen in Canada, Australia, and Other Bubble Markets

134 comments for “It Gets Spiky: The Most Splendid Housing Bubbles in America”