What the phenomenon of cheap credit has accomplished.

You’d think that corporate debt would grow in proportion to total sales, as this additional debt is used to fund investments in productive activities that create more sales and contribute to the economy, and that higher sales, and presumably higher earnings would create a proportionate increase in the value of the company, and thus in its stock price, and that they all go up together, not in lockstep but over time more or less at the same rate.

But that relationship between debt, sales, and share prices has gone completely out of whack.

First things first: Debt at nonfinancial companies – this excludes banks and nonbank lenders such as mortgage lenders – has soared. To get a feel for just how much, I have pulled the data on three major components of corporate debt:

Bonds issued by US companies in the US. Outstanding balances never even dipped during the Financial Crisis; they only flattened for a few quarters at around $2.97 trillion. Since them, outstanding bonds have soared from record to record, in total 76%, to $5.2 trillion.

This does not include bonds that US companies issue in other currencies in other countries. For example, it does not include euro bonds (“reverse Yankees”) that are hot in Europe, where junk bond yields are at a ludicrously low 2.35% on average, and the high-grade yield is just above zero.

Commercial & Industrial loans fell sharply during the Financial Crisis as banks stopped lending and as demand from companies withered. After peaking in Q4 2008 at $1.56 trillion, C&I loans fell to $1.19 trillion by Q3 2010. Then they soared and started setting new records in early 2014. By October 2016, they were up 35% from the prior peak and 77% from the trough – though they have largely flat-lined since then.

Commercial paper (short-term debt that money-market funds pick up) went through some trauma during the Financial Crisis when the otherwise highly liquid commercial-paper market froze up and companies relying on this market, such as GE, suddenly found themselves unable to do basic things, such as meeting payroll. Money-market funds “broke the buck” and chaos ensued. The Fed, in its function as lender of last resort, offered numerous short-term loan programs to keep the system afloat. Since then, the use of commercial paper has waned and outstanding balances have fallen 43% since Q1 2008 to $1.04 trillion currently.

The chart below shows the outstanding balances of these three forms of corporate debt combined, as issued in the US by nonfinancial companies. This includes debt issued by privately held companies, such as Toys “R” Us, which is owned by private equity firms and just filed for bankruptcy with disastrous consequences for some of its bondholders. These three categories of debt combined have soared 35% from their peak and 52% from the trough: 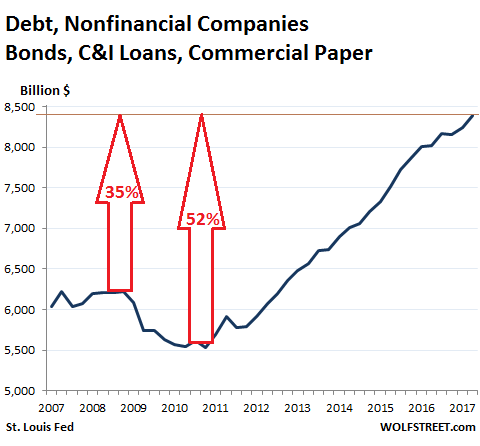 So given this sharp increase in corporate debt, business sales should be on a similarly red-hot trajectory.

Total business sales in the US as estimated by the Census Bureau represent sales of businesses of all sizes, whether publicly traded or privately held, but does not include sales in other countries.

Turns out business sales have been miserable in recent years. In Q2 2017, they were right back where they’d been in Q3 2014, after a hefty dip in between. This makes for nearly three years of stagnation. They’re up 40% from the depth of the Financial Crisis in the first three quarters of 2009, when everything ground to a halt, and just 12% above the prior peak in Q2 2008.

The chart below shows the V-shaped recovery in business sales to the level of the prior peak, reached in Q2 2011, and the very uninspiring performance since then: 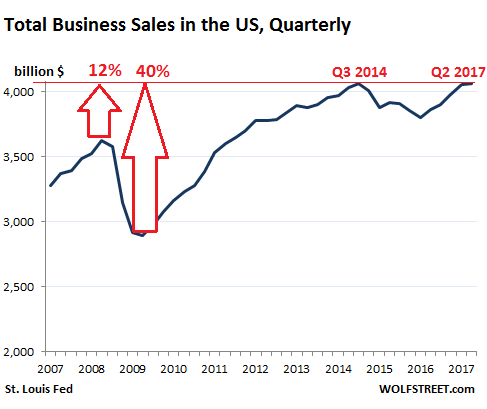 So the values of the companies should have moved somewhat in parallel. But the Wilshire 5000 Total Market Index, which tracks all publicly traded companies in the US, has soared 100% since the prior peak and a stunning 347% from the trough. 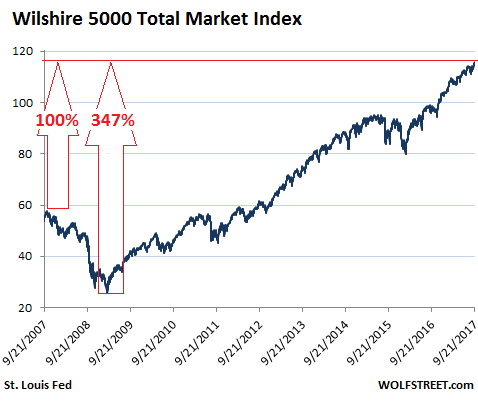 In short, debt jumped 35% since the prior peak before the Financial Crisis, as sales rose only 12% over the same period, but stocks have doubled from the highly inflated levels at that time.

It’s all part of the phenomenon of repressed yields and cheap credit: Companies are borrowing large amounts of money to buy back their own shares and to buy out each other, instead of funding investments in productive activities. The hype around these share repurchases and M&A fires up stock prices and contributes to the current stock price bubble, but does nothing for the economy and leaves corporate America and share prices in a very precarious position.