Hype works, until it doesn’t.

In theory, stock markets surge because earnings are rising or are expected to rise. But the astounding thing in this eight-year bull market is the combination of how far stocks have surged since 2011 and how lousy earnings have been – globally!

I’ve been pointing this out for US equities, but this is a global thing, with global implications, and of global magnitude, and on that level, it’s even grander and more astounding.

Global stocks, as measured by the MSCI AC, which tracks equity returns in 23 developed and 24 emerging markets, has soared over 11% year-to-date and is up 32% since pre-Financial-Crisis peak-year 2007. Some components within it:

This chart by Economics and Strategy, National Bank of Canada, shows the increase of the MSCI indices for the US (brown line), Emerging Markets (red line), the World (blue line) and the EU (teal line at the bottom). The left scale is set at 2007 =100. So when the MSCI US is at 175 on the left scale, it has surged 75% from 2007: 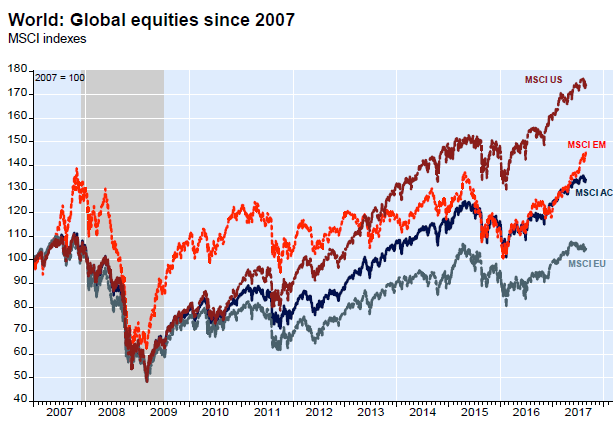 So you’d think that these surging stock prices would be based on surging corporate earnings, that companies are raking in profits hand over fist, and that financial engineering, “adjustments,” and share buybacks are making these earnings looks even fatter and grander.

And you’d think the “estimated forward earnings” would be booming. There are what analysts and corporate PR departments put out to be their hope for future “adjusted earnings,” which are then massively slashed as earnings reporting dates move closer so that “adjusted earnings” have a chance of beating the lowered estimates. These “adjusted earnings” are earnings as reported under GAAP minus a ton of bad stuff “adjusted” out of them. They contrast with GAAP earnings.

The difference between earnings under GAAP and “adjusted earnings” can be significant. For example, these are among the biggest sinners in the S&P 500 for the second quarter (FactSet):

These forward earnings projections that are designed to inflate stock prices are the highest possible hope for “adjusted earnings.” But the ugly reality is that even these forward earnings estimates, however inflated they may be, went on a wild roller-coaster ride and, on a global basis, haven’t yet reached the peak they’d hit in mid-2008.

These are “forward earnings” expectations. They reflect hope not reality. These hopes didn’t begin to plunge until later in 2008, when the Financial Crisis was already in full swing.

This chart by Economics and Strategy, National Bank of Canada, shows that roller-coaster ride of global forward earnings per share, their peak in 2008, the plunge during the Crisis, the V-shaped recovery until 2011, and then the earnings doldrums. The last few years were rough for earnings (I added the red line): 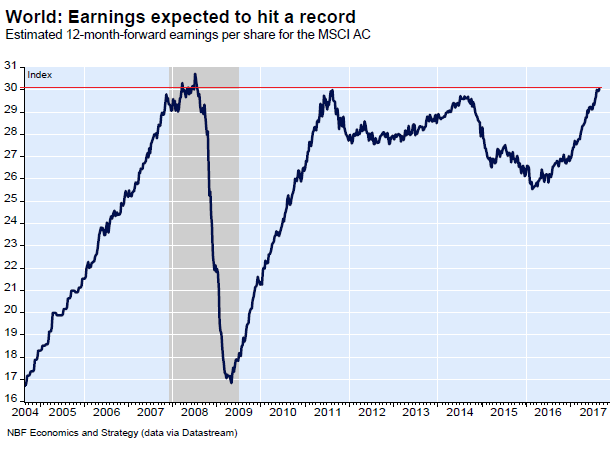 So global forward earnings estimates by this measure today are finally back where they’d been in 2011 – six years of stagnation – but remain below the peak in 2008. If you ignore the plunges in between, forward earnings have now stagnated for nearly a decade.

For stocks in the S&P 500, aggregate earnings per share (EPS) in Q2 on a trailing 12-months basis – adjusted earnings as reported, not as hoped – rose for the second quarter in a row are now where they’d been in… July 2014. Yet, over these three years of earnings stagnation, the S&P 500 index has soared 26%.

This chart shows those “adjusted” earnings per share for the S&P 500 companies (black line) and the S&P 500 index (blue line), via FactSet: 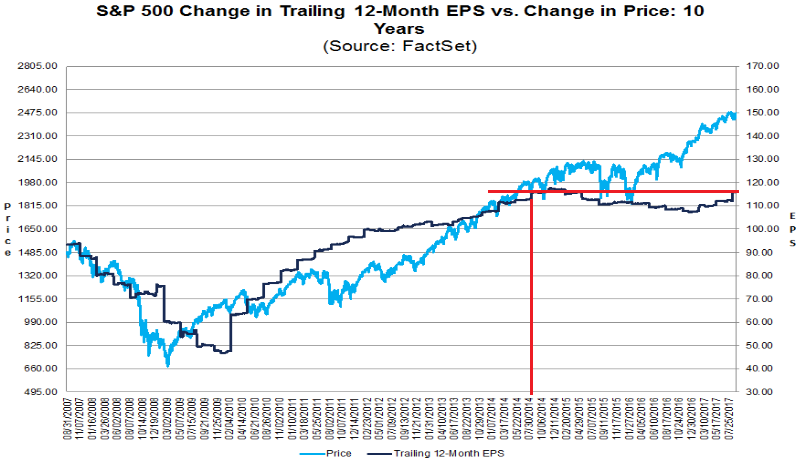 This relationship between stagnating earnings and soaring stock prices is not an indicator of a healthy market. It’s an indicator of dizzying “multiple expansion” when PE ratios blow through the roof, and when speculation knows no bounds. But PE ratios revert to the mean, and in the process overshoot to the downside, which forms the mean. This process of “multiple contraction” is carried out on stock prices.

Every time before this process begins, we hear that this time it’s different, that this time there are real reasons why high PE ratios will go ever higher, and why they won’t contract, and we hear that the paradigm has changed, and that the old measures no longer apply. That’s what we hear every time. And just when that chorus about the new paradigm gets sufficiently deafening, the process of multiple contraction takes off. This can be a slow and halting process whose beginning might not be remarkable, with many ups and downs that could drag out for many painful years.

This is how monetary policies have crushed the value of labor. Read…  The US Cities with the Biggest Housing Bubbles