This is how monetary policies have crushed the value of labor.

For the good folks who hope fervently that the Fed doesn’t have reasons to raise rates or unwind QE because there isn’t enough inflation, here is an update on one aspect of inflation – asset price inflation, and particularly house price inflation – where the value of your hard-earned dollars has collapsed over a given number of years to where it takes a whole lot more dollars to pay for the same house.

So here are some visuals of amazing house price bubbles, city by city. Bubbles really aren’t hard to recognize, if you want to recognize them. What’s hard to predict accurately is when they will burst. Normally the Fed doesn’t want to acknowledge them. But now it has its eyes focused on them.

The S&P CoreLogic Case-Shiller National Home Price Index for June was released today. It jumped 5.8% year-over-year, not seasonally adjusted, once again outpacing growth in household incomes, as it has done for years. At 192.6, the index has surpassed by 5% the peak in May 2006 of crazy Housing Bubble 1, which everyone called “housing bubble” after it imploded (data via FRED, St. Louis Fed): 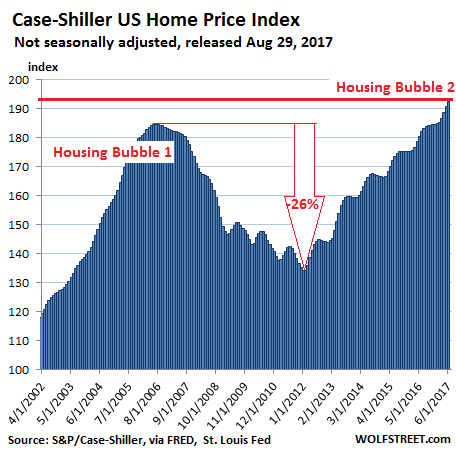 The Case-Shiller Index is based on a rolling-three month average; today’s release was for April, May, and June data. Instead of median prices, it uses “home price sales pairs,” for example, a house sold in 2011 and then again in 2017. Algorithms adjust this price movement and add other factors. The index was set at 100 for January 2000. An index value of 200 means prices have doubled in the past 17 years, which is what most of the metros in this series have accomplished, or are close to accomplishing.

Real estate is local. Therefore real estate bubbles are local. If enough local bubbles balloon at the same time, it becomes a national housing bubble. As the above chart shows, the US national Housing Bubble 2 now exceeds the crazy levels of Housing Bubble 1, and in all ten major metro areas, home prices are setting new records. 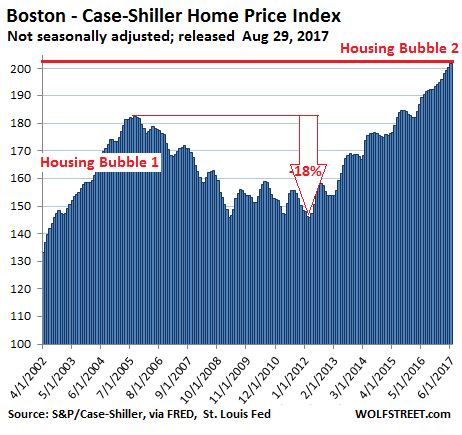 Home prices in the Seattle metro have spiked over the past year, pushing the index 20% above the peak of Housing Bubble 1 (Jul 2007): 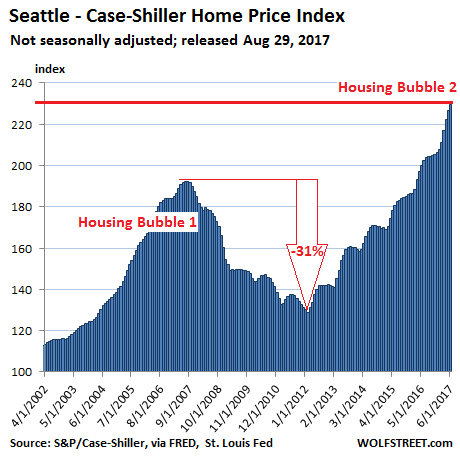 Then there’s Denver’s very special house price bubble. The index has soared a stunning 43% above the peak of Housing Bubble 1 (Aug 2006): 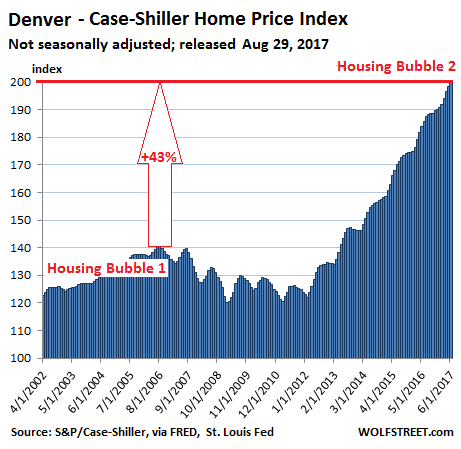 People in the Dallas-Fort Worth metro felt left out during Housing Bubble 1, when prices rose only 13% in five years, while folks in other parts of the country were getting rich just sitting there. They also skipped much of the house price crash. But they know how to party when time comes. The index has now surged by 42% from the peak in June 2007: 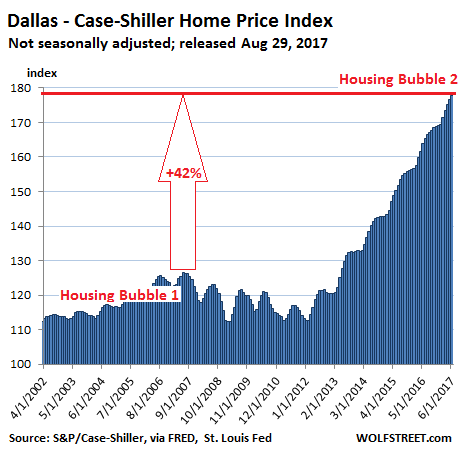 The Atlanta metro, where home prices had plunged 36% after Housing Bubble 1, has now finally squeaked past the prior peak by 2%, with a near-perfect V-shaped bubble recovery: 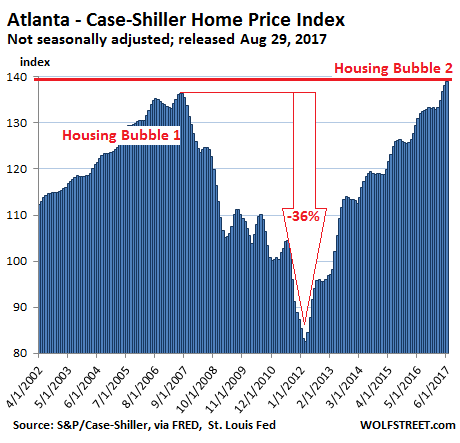 Portland’s home prices have kicked butt since 2012, with the index soaring 71% in five years – not that homes were cheap in Portland in 2012. Portland’s house price bubble is now 20% above the peak of Housing Bubble 1: 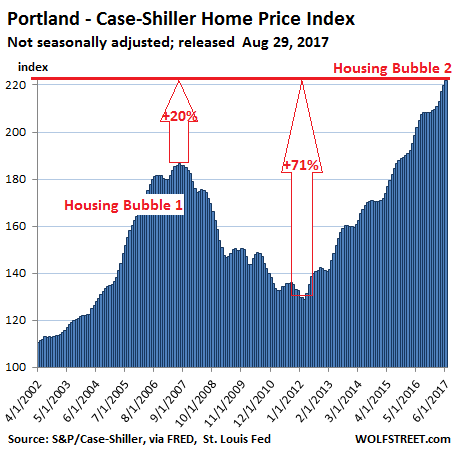 The San Francisco Case-Shiller Index, which covers the five-county Bay Area and not just San Francisco, is now 10% above the insane peak of Housing Bubble 1. During the last housing crash, the index plunged 43%. Eight years of global monetary craziness has sent liquidity from around the world sloshing knee-deep through the streets, which has performed miracles: 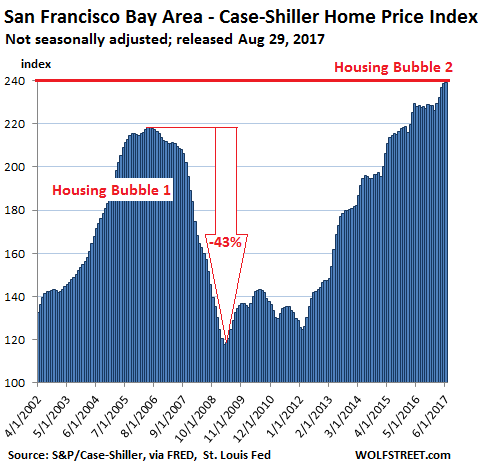 Los Angeles home prices performed similar feat, doubling from 2002 to July 2006, before giving up two-thirds of those gains, then soaring once again. The index is now 3% above the peak of totally insane Housing Bubble 1: 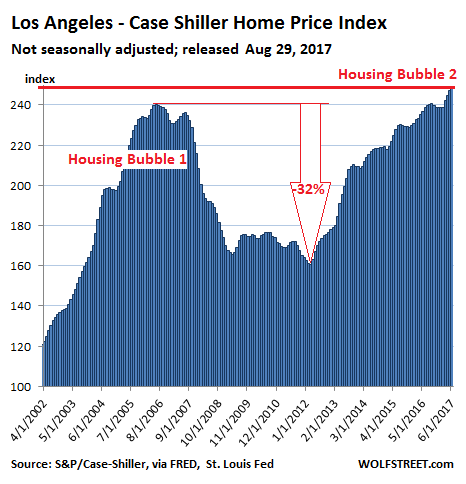 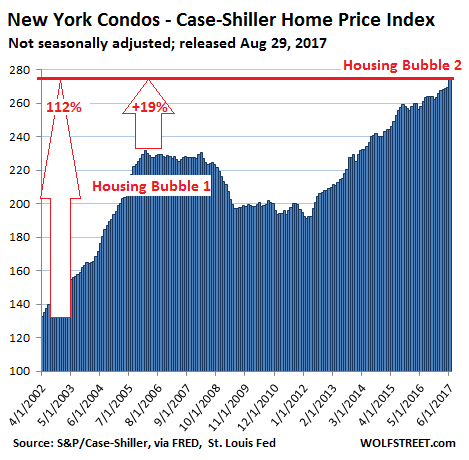 While the monetary policies of the past eight years have had no impact on wage inflation in the US, and only moderate impact on consumer price inflation, they’ve been a rip-roaring success in creating asset price inflation.

Asset price inflation means that the dollar loses its value when it comes to buying assets. Wage earners, when they’re trying to buy assets today – not just homes but any type of asset, including buying into retirement plans – are finding out that their labor is buying only a fraction of the assets that their labor could buy eight years ago. This is how these monetary policies have crushed the value of labor.

But this is causing some wrinkles. Ludicrously high home prices in the Bay Area are now coinciding with the end of the employment boom? Read…  San Francisco Bay Area Pending Home Sales Plunge

108 comments for “The US Cities with the Biggest Housing Bubbles”