How will it impact nationwide auto sales?

The full extent of the devastation, mayhem, pain, and loss of life that Hurricane Harvey is leaving in its path is still unknown, and people are still trying to get to safety. It sent the oil-and-gas industry reeling. Housing in affected areas took a serious hit; perhaps $40-billion in damage, according to an early guess by CoreLogic.

Fannie Mae and Freddie Mac expect losses on about 400,000 mortgages that they guarantee. This could increase as flood waters rise. They won’t know the extent of the damage until after the wind and rain in Texas and Louisiana subside. Other homes did not have mortgages, or had mortgages that were not guaranteed. So perhaps a total of 500,000 homes.

If each affected home had 1.6 vehicles parked there on average, it would mean that about 800,000 vehicles sustained flood damage. Many people evacuated with their cars, so this is just a guess. How big is this number? Over the past 12 months in the Greater Houston Area, dealers sold 285,000 new vehicles.

But not all flood vehicles will need to be replaced. Insurers might only pay to clean up and repair some of the vehicles. And many people without comprehensive coverage won’t have the money to replace their vehicle. They might also get laid off because the company they work for is under water, and it might take a long time for things to return to normal.

When a new vehicle on a dealer lot gets flooded, it cannot be sold anymore, and the insurance company takes it off the dealer’s hands. But personally owned flood vehicles that were partially immersed in water might be serviceable afterwards, though they tend to stink, are hard to clean up, and may have, let’s say, some issues. If a vehicle gets washed down the street and suffers severe body damage, it’s likely to turn into a total loss.

The driver of the SUV in this photo apparently “tried to make a right turn into a gas station last night; a ditch full of water looks a lot like a road full of water in the dark,” said Michael Gorback, M.D., in Houston, who took the photo. This looks like one of the headaches the insurance industry is facing: 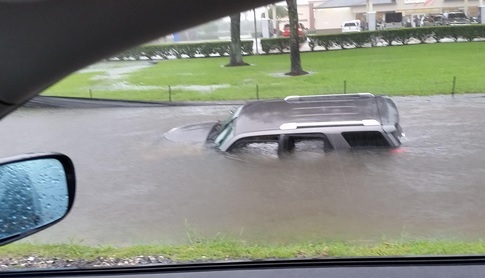 Before Harvey hit, auto sales in Greater Houston had already been battered to Financial-Crisis levels by the oil bust and the subsequent construction downturn. In July, heavy incentives finally did the trick, and there was an uptick: new vehicle sales rose 6.4% from the crushed levels a year earlier, according to TexAuto Facts, reported by InfoNation, and cited by the Greater Houston Partnership. 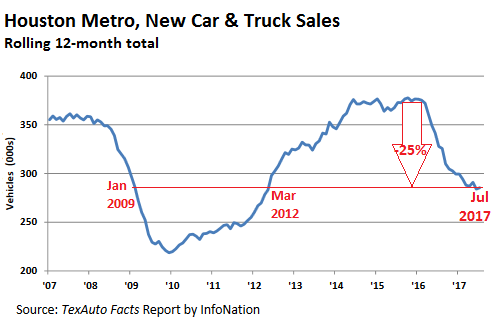 Now come the effects of Harvey.

August: Starting on Friday, August 25, in the flooded areas, new vehicle sales essentially dropped to zero. Dealerships are closed. People are struggling with evacuations. They’re trying to find loved ones. They can’t get around. Auto sales will remain at zero in flooded areas until the water recedes.

This may take a week or more. So auto sales in the affected areas, which now include parts of Louisiana, will plunge in August. The above chart will take a very ugly turn. Given how large the area is, six days of zero sales will further depress nationwide sales numbers for August.

September: Vehicle sales in the first part of September will look very ugly in affected areas and will remain at zero in some areas. After the flood waters clear out, people will begin to assess the damage to their vehicles. Many vehicles will be OK. Folks will clean them up and go on. Other vehicles will end up in a salvage yard. People with comprehensive insurance coverage will try to get their insurance adjusters to pull out their check book, and adjusters will try to minimize the payouts. Many older vehicles don’t have comprehensive coverage, and these folks are on their own.

Then the search for replacement vehicles begins – new and used. New-vehicle dealers whose lots were seriously flooded cannot sell those flood vehicles. The insurance company will take them off their hands. Some dealers experienced a total loss of inventory. Since the flood waters are still rising in some places, and more rain is expected, the full extent of the damage to dealer inventories is not yet known.

There is plenty of new vehicle inventory in the US – too much of it, in fact. These vehicles, in theory, could be transferred to Texas and Louisiana, and dealers in other parts of the country would love to get rid of them. But the excess inventories are largely in cars. Persuading Texans to replace their pickups or SUVs with sedans or compact cars? That’s just not going to happen. So there will be inventory shortages of the desired truck models. But it won’t make much of a dent, so to speak, into the pile of new cars accumulating on storage lots around the nation.

Some of these dynamics, including dealer transfers of vehicles into Texas, will kick off in September. Most likely, the first half of September is still terrible for sales, but demand will surge in the second half. Dealers in surrounding areas, including Dallas-Fort Worth, will see booming sales until they run out of trucks.

October: New vehicle sales in the affected areas will surge. It will entail a mad scramble to get trucks and SUVs from other parts of the US to dealers in the affected areas. Lead times with manufacturers are too long to respond to this demand spike quickly. The surge in demand will likely continue through the rest of the year and into 2018.

How visible would this surge be in the national numbers? So far this year, new vehicle sales in the US averaged 1.4 million vehicle per month, down about 41,000 from last year. If Harvey creates demand for 100,000 new vehicles a month, on top of what would be normal demand, for the rest of the year, so 300,000 additional vehicle sales in total, it would be just enough to bring total 2017 sales nationwide back to the level of 2016.

However, it will be an enormous logistical and personnel challenge for dealers in this region to get back on their feet, source vehicles to replace their flood vehicles, and source an additional 100,000 new vehicles every month for the rest of the year, and sell all of them. They will work furiously to accomplish this, but I doubt that it can be done.

Instead, the Harvey-triggered demand will likely translate into smaller sales gains in late 2017 – probably not enough to pull up the entire year to the level of 2016 – and will spread further into 2018, with pickups and SUVs experiencing most of the boost, and car sales languishing as before.

The asset class of Beautiful Machines deflates. Read …  What the Heck’s Going On with Vintage Automobiles?

149 comments for “What will Harvey do to “Carmageddon?””