The fate of asset bubbles under the new regime.

Everyone is hoping that next Friday and Saturday, at Sotheby’s auction in Monterey, California, the global asset class of collector cars will finally pull out of their ugly funk that nearly matches that during the Financial Crisis. “Hope” is the right word. Because reality has already curdled. Sotheby’s brims with hope and flair:

Every August, the collector car world gathers to the Monterey Peninsula to see the magnificent roster of best-of-category and stunning rare automobiles that RM Sotheby’s has to offer. For over 30 years, it has been the pinnacle of collector car auctions and is known for setting new auction benchmarks with outstanding sales results.

This asset class of beautiful machines – ranging in price from a 1962 Ferrari 250 GTO Berlinetta that sold for $38.1 million in 2014 to classic American muscle cars that can be bought for a few thousand dollars – is in trouble.

Unlike stock market indices, the Hagerty Market Index is adjusted for inflation via the Consumer Price Index. So these are “real” changes in price levels.

The index has now fallen nearly 7 points below the level of August 2014. That was three years ago! In fact, the index is now at the lowest level since March 2014.

The chart below from Hagerty’s August report shows how the index surged 83% on an inflation-adjusted basis from August 2009 to its peak in September 2015, and how it has since given up one-third of those gains. This is what the inflation and deflation of an asset bubble looks like (I added the dates): 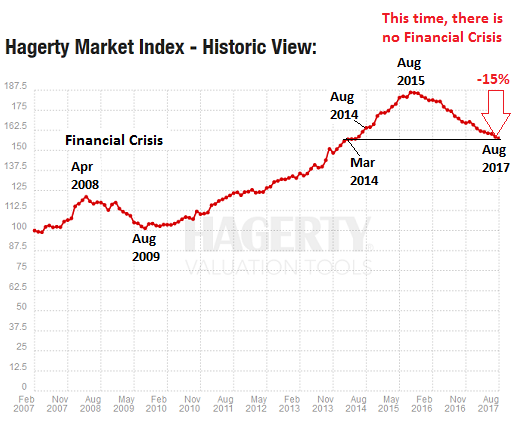 During the Financial-Crisis, the index peaked in April 2008 at 121.0, then plunged 16% (20 points) to bottom out in August 2009 at 101.39. By then, the liquidity from the Fed’s zero-interest-rate policy and QE was washing across the world, and all asset prices began to soar.

The number of owners expressing the belief that the values of their vehicles are increasing continues to gradually decline, and this is true for the owners of both mainstream and high-end vehicles. The drop is particularly pronounced, however, for owners of previously hot models like the Ferrari 308 and Ford GT.

For the second month in a row, expert sentiment dropped more than any other section.

The asset class of vintage automobiles was among the first bubbles to pop. This didn’t happen in one fell swoop. It’s a gradual process that started in the fall of 2015, and observers brushed it off because it was just a minor down tick as so many before. But since then, it has become relentless and persistent, with plenty of ups and downs. Every expression of hope that it would end soon has been frustrated along the way.

And every day, there’s still hope. For example, back in May, the Hagerty report commented that “prices have started to normalize.” Since then, the index has continued its methodical decline.

But month after month, buyers of vintage cars become a little less enthusiastic and sellers a little more eager. Yet, unlike during the Financial Crisis, there are no signs of panic. The tsunami of liquidity is as powerful as before. Financial conditions are easier than they were a year ago. There’s no forced selling. Just an orderly one-step-at-a-time asset bubble deflation.

Now the Fed is tightening. QE ended about the time the classic car bubble peaked. The Fed has raised its target for the federal funds rate four times so far in this cycle. It will likely announce the QE unwind in September and “another rate hike later this year,” New York Fed president William Dudley told the AP. And the below-target inflation is not a problem. Read… Fed’s Dudley Drops Bombshell: Low Inflation “Actually Might Be a Good Thing”

84 comments for “What the Heck’s Going On with Vintage Automobiles?”