Real estate agents listed three reasons for the debacle of pending home sales in the state of California in July:

Lack of inventory for sale. This was the top reason for 30% of brokers. The math is starting to bite: more people are stuck in their homes as prices have soared all around, and as mortgage payments needed to finance an equivalent or nicer home have moved out of reach.

Declining housing affordability and “high interest rates” – which are near historic lows! – was cited by 28% of brokers.

“Inflated home prices” and “housing bubble” were cited by 25% of brokers.

Slowdown in economic growth, lending and financing, and policy and regulations were other “biggest concerns.”

These issues “may have pushed the market to a tipping point,” the California Association of Realtors said in its pending home sales report for July.

And a debacle it was, particularly in the San Francisco Bay Area, where home prices have become famously ludicrous, while the economy is backing off its previously relentless boom. Employment growth has slowed to a crawl, with actual job losses for the 12-month period in two counties – Santa Clara and Marin – a first since the Financial Crisis.

In California’s capital, Sacramento, where home sales had been hot, they plunged nearly 18% from a year ago.

This chart shows the changes in pending homes sales in July compared to July 2016 for some of the major urban counties in California, plus for California overall (top bar), the San Francisco Bay Area overall (second bar from the top), and Southern California: 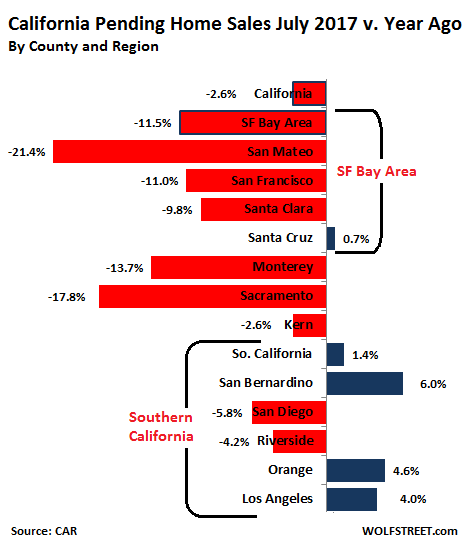 So could the end of the jobs boom in the Bay Area have something to do with the weakness in housing sales? This chart shows the rolling 12-months growth in employment in Santa Clara County. This southern part of Silicon Valley, which includes San Jose and Palo Alto, has started to shed jobs for the first time since the Financial Crisis (not seasonally adjusted data via the California Employment Development Department): 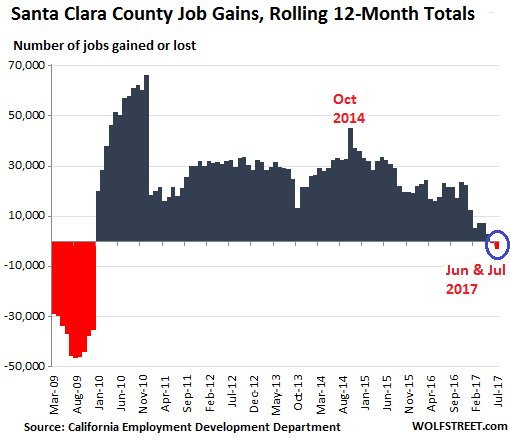 The end of the employment boom has spread across the Bay Area. Santa Clara and Marin counties have shed jobs on a 12-months basis. In the remaining counties, especially in San Francisco, 12-month employment growth has slowed to a trickle. And this comes just as the Bay Area house price bubble has reached highs that worry even real estate agents, as the survey above shows. So it’s not that hard to see a connection.