Median asking rent for one-bedroom apartments across the US rose 4% in June compared to a year ago, to $1,209. And for a two-bedroom, it rose 3.7% to $1,442. But these averaged-out national figures gathered from advertised for-rent apartments in multifamily buildings hide the city-by-city drama on the ground, with rents plunging in some of the largest and most expensive metros but soaring by the 10% to 15% in many other cities. People feel either some relief or horrendous rent inflation, depending on where they live. So here we go.

These are median asking rents in multifamily apartment buildings, including new construction, as they appeared in active listings in cities across the US, collected by Zumper. These rents do not include “concessions,” such as “1 month free” or “2 months free.” Single-family houses for rent are also not included, as are studios and units with more than two bedrooms. Zumper releases the data in its National Rent Report.

Chicago is in a special category in terms of big cities: There has been plenty of new construction in recent years, but the population has been declining as tax burdens are growing while the city is tottering very slowly toward what may become the largest municipal bankruptcy filing in the US.

Washington DC rents are suddenly coming unglued: 1-BR rents fell 2.3% year-over-year to $2,160 and are down 7.7% from their peak just last December. And the 2-BR rent has plunged 15.8% from last June, which was their peak. That was fast.

The cheapest unit with bath listed on Zillow today — not counting rooms without bath, shared rooms with bunks, and the like — is a basic studio in the Mission Dolores area, for $1,195. And then it goes from here:

In other words, 73% of the apartments listed for rent on Zillow have asking rents of over $5,000! But these units include condos for rent, which tend to be high-end, plus 3-BR and larger units. Neither condos-for-rent nor 3-BR and larger are included in Zumper’s data. The median asking rent (half of the rents are higher, and half are lower) for all units listed on Zillow would be over $5,000.

Hence our local term, “Housing Crisis” — a crisis of affordability, not availability.

The table below shows the 16 of the 100 most expensive major rental markets in the US. The shaded area shows peak rents and the movements since then. The black bold “0%” in the shaded area means that these markets set new records in June. Note: If rents are down by a few bucks from the peak a few months ago, and red, it doesn’t yet mean that the market has turned – a turning point would require more prolonged data. 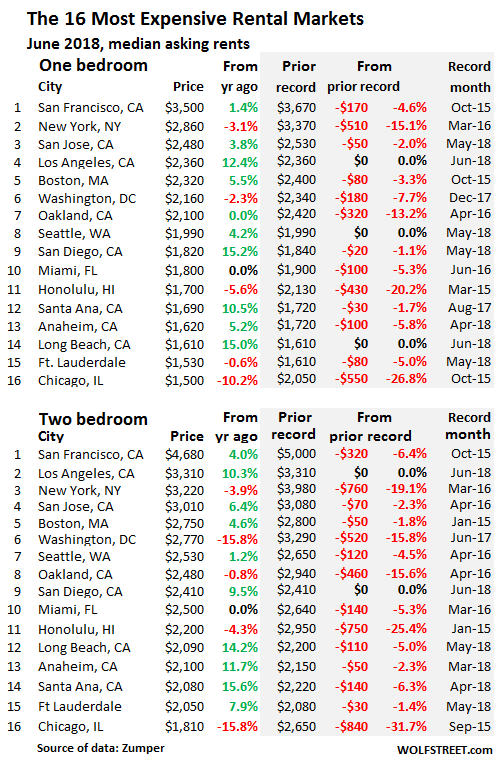 Seattle stands on its own in terms of a construction boom producing an onslaught of high-end rental supply that the market has now trouble swallowing, even as affordability as become a crisis. I discussed this yesterday [Is This Going to Crush Rents in Seattle?]

In Southern California, the rental market is going completely nuts. The area has five cities on the above list: Los Angeles, San Diego, Santa Ana, Anaheim, and Long Beach. In four of them, rents have jumped between 10% and 15% from a year ago.

Of the three Bay Area cities on the list, rents are down from the respective peaks in all three: San Francisco, Oakland, and in San Jose. In the latter, they’re barely down from the peak, not enough to pass judgement. But rents in Oakland have dropped between 13% and 15% from their respective peaks. This was once the red-hot market for San Francisco’s rent-refugees, but it is cooling off.

The table below shows Zumper’s list of the 100 most expensive major rental markets in the US, in order of median asking rent for 1-BR apartments in June, and percentage changes from a year ago.

Many of the less expensive rental markets have double-digit year-over rent increases. In fact, of the 35 cheapest rental markets at the bottom of the list, 1-BR rents jumped by 10% or more in 24 of them, and by 15% or more in 11 of them (a third!). In the 2-BR arena, it’s similar: Of the 35 cheapest markets on the list, 21 had double-digit rent increases and seven of them over 15%. And for renters living those markets, it’s really tough; for them, none of the averaged-out national numbers make any sense (use the browser search box to find a city).