Let’s be clear: It’s not just Argentina. But Argentina is the most elegant example. The exodus of the hot money from emerging markets where cheap dollar-debts were used to fund pet projects and jack up leverage is – once again – in full swing. Cheap dollar-debt in emerging markets is an old sin that, like all old sins, is repeated endlessly. The outcome is always trouble. But during the act, it sure is a lot of fun for everyone.

The exodus of the hot money is even gripping the non-basket-case emerging economies of Asia where it’s causing the worst indigestion since 2008. Bloomberg:

Overseas funds are pulling out of six major Asian emerging equity markets at a pace unseen since the global financial crisis of 2008 – withdrawing $19 billion from India, Indonesia, the Philippines, South Korea, Taiwan, and Thailand so far this year.

While emerging markets shone in the first quarter, suggesting resilience to Federal Reserve tightening, that image has shattered over the past two months. With American money market funds now offering yields around 2% – where 10-year Treasuries were just last September – and prospects for more Fed hikes, the bar for heading into riskier assets has been raised.

“It’s not a great set-up for emerging markets,” James Sullivan, head of Asia ex-Japan equities research at JPMorgan Chase, told Bloomberg. “We’ve still only priced in about two thirds of the US rate increases we expect to see over the next 12 months. So the Fed is continuing to get more hawkish, but the market still hasn’t caught up.”

Emerging markets have responded to this new environment and a newly hawkish Fed with all kinds of gyrations, including raising rates in order to prop up their currencies. For example, the central banks of Argentina and Turkey hiked key rates to 40% and 17.75% respectively.

But don’t blame the Fed – that’s what outgoing New York Fed President William Dudley told reporters, after Reserve Bank of India Governor Urjit Patel had blamed the Fed via an op-ed in the FT, titled ominously, “Emerging markets face a dollar double whammy.” Patel told the Fed to slow down the QE unwind that is now accelerating.

“Dollar funding of emerging market economies has been in turmoil for months now,” Patel wrote – because yeah, the era of the cheap dollar is over, and investors should have figured that out two-and-a-half years ago when the Fed started hiking rates. But the market didn’t want to believe that the Fed would actually do it. And suddenly over the past two months, it dawns on these geniuses that the Fed has actually been hiking rates and will continue to do so for some time.

Patel not only blamed the QE unwind but also the simultaneous and massive issuance of new Treasury debt by the US government to fund its ballooning deficits. This new issuance of Treasuries “will absorb such a large share of dollar liquidity that a crisis in the rest of the dollar bond markets is inevitable.”

Dudley rejected that type of criticism from an emerging-market central bank. “There has been some spillover, potentially, to emerging-market economies, but again, it’s also hard to sort of say how much of that is due to the normalization of the balance sheet versus other factors,” Dudley said, according to Bloomberg:

He cited large fiscal and current account deficits in many emerging markets, which he said “probably would have been problematic in any case, so sort of laying this all at the feet of the balance sheet normalization process, I think, is probably going a little bit too far.”

So don’t cry for Argentina’s investors that inexplicably bought $2.75 billion of 100-year bonds with a 7.125% coupon in June last year, at the peak of the cheap dollar-debt benightedness.

Everyone knew that Argentina would default on these bonds before they’d mature, as it has defaulted repeatedly on its foreign-currency debts, and that it was only a question of when it would default and how many times.

But the lure was just too juicy to not bite, in an environment where central-bank shenanigans (NIRP) were producing negative bond yields in Europe and Japan. And even in the US, ZIRP was still not fully banished. In the ensuing pandemic chase for yield, which had lasted years, investor brains were systematically starved of oxygen.

Argentina sold these “century bonds,” which mature in 2117, at 90 cents on the dollar – and investors thought they’d gotten a sweet deal. And they sure had if they sold the bond when it peaked on October 30 at 103.94. This gave sellers a profit of 15%. Those that didn’t sell or that bought at the time are ruing the day.

The bond has since plunged 23% to 79.98 cents on the dollar by Friday, and is down 11% from the price when issued (chart via Bloomberg, click to enlarge): 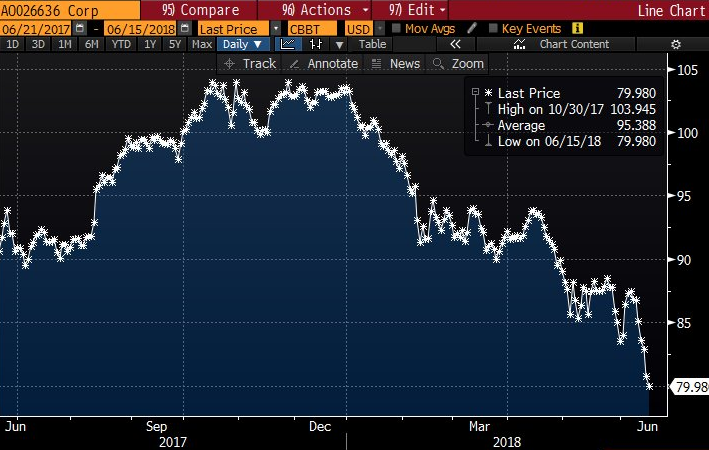 The thing is, Argentina hasn’t even defaulted on it yet, though 11 months after selling the bonds, it has already gone begging to the IMF for a bailout. And the IMF, in another bout of debt-benightedness, has agreed to lend it $50 billion. But those $50 billion won’t be used to pay off the century bond. They’ll be plowed into government spending and will disappear, leaving Argentina with an additional $50 billion in dollar-debt.

It’s not crazy for Argentina to have undertaken this piece of 100-year gaucho showmanship – in fact, you have to admire it for being able to pull it off. But it’s crazy for investors to have fallen for it.

Why is anyone still lending Argentina’s government any money? Read…  Seems Impossible, but Argentina’s Peso Was Able to Collapse even Further Despite $50 Billion IMF Bailout

41 comments for “Chasing Yield during ZIRP & NIRP Evidently Starved Human Brains of Oxygen. Now the Price Is Due”