Just as the Fed created money to buy Treasuries and MBS during QE, it now destroys money as these securities “roll off” the balance sheet.

It took the Fed five-and-a-half years to amass $3.4 trillion in Treasury securities and mortgage-backed securities (MBS) during QE, including the year 2014 when it was “tapering” QE to zero. The Fed is now reversing that process, including the opposite of “tapering,” as it is ramping up its QE unwind.

The Fed’s balance sheet for the week ending June 6, released Thursday afternoon, shows a total drop of $141 billion since October, the beginning of the era officially called “balance sheet normalization.” At $4,319 billion, total assets have dropped to the lowest level since May 7, 2014, during the middle of the “taper.”

If the Fed continues to follow its plan, it will shed up to $420 billion in securities this year, and up to $600 billion a year in 2019 and each year in the future, until it considers its balance sheet to be “normalized” — or until something big breaks. For May, the plan calls for the Fed to shed up to $18 billion in Treasuries and up to $12 billion in MBS. So how did it go?

The balance of Treasury securities fell by $17.7 billion in May to $2,378 billion, the lowest since May 28, 2014. Since the beginning of the QE-Unwind, $88 billion in Treasuries “rolled off.” The blue arrow indicates the amount that rolled off in May: 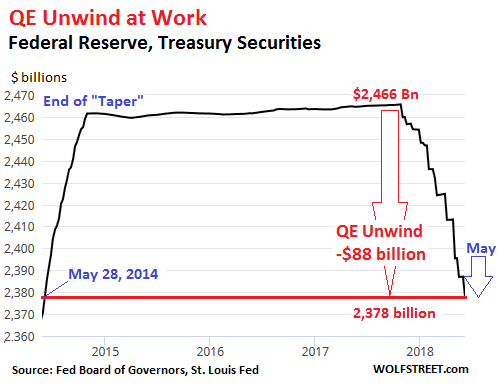 The step-pattern in the chart is a function of how the Fed unloads securities. It doesn’t sell them outright but allows them to “roll off” when they mature. Treasuries mature mid-month or at the end of the month. Hence the stair-steps.

On May 15, $26.4 billion in Treasuries on the Fed’s balance sheet matured. The Fed replaced $17.9 billion of them with new Treasury securities directly via its arrangement with the Treasury Department that cuts out primary dealers that the Fed normally does business with. In other words, that $17.9 billion was “rolled over.” But it did not replace $8.5 billion of maturing Treasuries. They “rolled off.”

On May 31, $28.6 billion matured. The Fed replaced $19.4 billion with new Treasuries. The remaining $9.2 billion of maturing Treasuries “rolled off” without replacement.

First things first: The Fed only holds MBS that were issued and guaranteed by Fannie Mae, Freddie Mac, and Ginnie Mae. The credit risk lies with these government sponsored enterprises, not with the Fed.

Residential MBS are a little quirky as far as bonds go. Holders receive principal payments on a regular basis as the underlying mortgages are paid down or are paid off. At maturity, the remaining principal is paid off. Over the years, to keep the MBS balance from declining, the New York Fed’s Open Market Operations (OMO) kept buying MBS.

Settlement of those trades occurs two to three months later. Since the Fed books the trades at settlement, the time lag between trade and settlement causes large weekly fluctuations on the Fed’s balance sheet — the jagged line in the chart below. The lag also delays when MBS that “rolled off” actually disappear from the balance sheet. So the current balance sheet reflects MBS that rolled off around March and April [my detailed explanation].

Since the beginning of May, the MBS balance fell by $10.4 billion, to $1,734.6 billion, the lowest since August 12, 2015. In total, $36 billion in MBS have “rolled off” since the beginning of the QE unwind. Also note how the jags in the jagged line are starting to disappear as the Fed phased out its purchases, and the phase-out, after the time-lag, is now showing up: 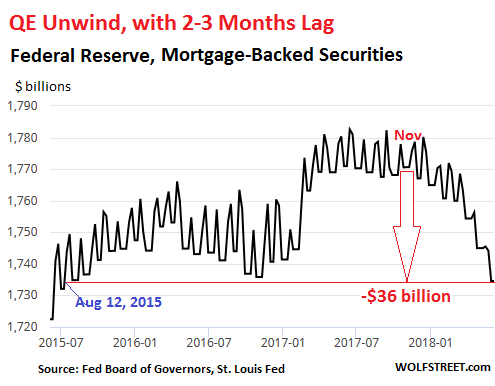 The Fed has other roles that might impact assets and liabilities of the balance sheet, including that it acts as the bank of the US Treasury Department and holds “Foreign Official Deposits” by other central banks and government entities. So the overall assets on its balance sheet don’t move exactly in line with the balances of Treasuries and MBS.

In May, total assets on the Fed’s balance sheet dropped by $37 billion, to $4,319 billion, the lowest since May 2014. Assets are now down by $141 billion since the beginning of the QE-Unwind: 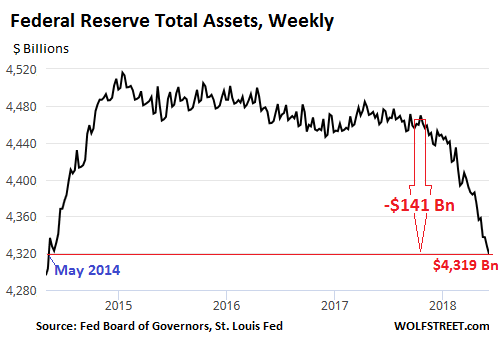 Just as the Fed created money to buy Treasuries and MBS during QE, it now destroys money when Treasuries and MBS “roll off” the balance sheet. The money just disappears to where it had come from – nothingness. Just like QE added liquidity to the markets, the QE unwind is draining liquidity. QE was associated with enormous media hoopla for maximum “wealth effect” in terms of asset price inflation; but the QE unwind happens quietly, on autopilot, and the media is silencing it to death.

101 comments for “Update on the Fed’s QE Unwind”