When consumer products companies, retailers, oil-and-gas drillers, manufacturers, and other companies complain that shipping goods within the US is confronting them with soaring costs, capacity constraints, and delays, they’re not making this up. Trucking companies and railroads – an infamously cyclical industry that suffered through the “transportation recession” from 2015 through much of 2016 – are jacking up their prices with gusto.

The total amount that shippers spent on freight by truck, rail, barge, and air is skyrocketing, according to the Cass Freight Expenditure Index, which tracks the amounts spent by shippers on all modes of transportation. This spending is a function of price and volume. In May, soaring prices and shipping volume pushed spending up by 17.3% compared to a year ago, the 8th double-digit year-over-year increase in a row: 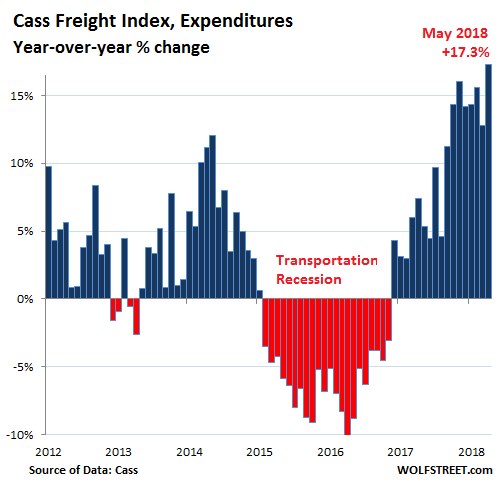 “May’s 17.3% increase clearly signals that capacity is tight, demand is strong, and shippers are willing to pay up for services to get goods delivered in all major modes throughout the transportation industry,” the Cass report said.

And the rising price of fuel and the related fuel surcharges added to the amounts spent: the price of diesel was up 27% at the end of May from a year ago.

The Cass Truckload Linehaul Index, which tracks per-mile full-truckload pricing but does not include fuel or fuel surcharges and is not impacted by rising diesel prices, jumped 9.0% in May compared to a year ago, the largest year-over-year increase in the data going back to 2005. And “the strength is continuing to accelerate,” Cass said in its Linehaul report: 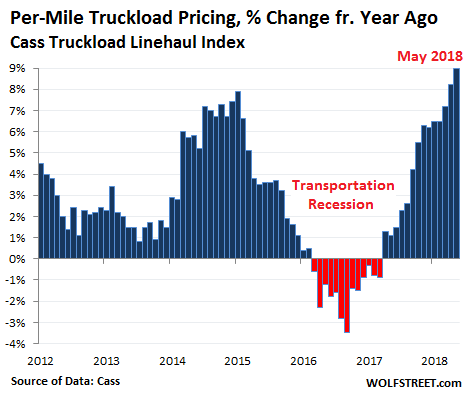 And prices for “intermodal” freight are soaring. This is freight that involves a combination of several modes of transportation: in the continental US, mostly truck and rail, such as a container that is hauled by truck to an intermodal facility, loaded on a train, taken to the destination city where it’s transferred to a truck for final delivery. It can also be a semi-truck trailer whose trajectory includes piggybacking on special rail cars.

“Tight truckload capacity and higher diesel prices are creating incremental demand and pricing power for domestic intermodal,” the Cass Intermodal report said. This is what the May spike looks like: 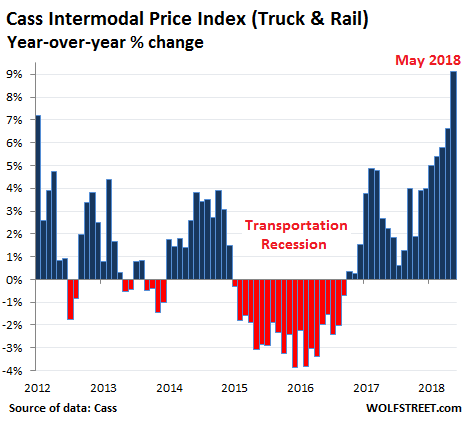 Demand has been very strong across all modes of transportation. Freight shipment volume (not pricing) by truck, rail, air, and barge, according to the Cass Freight Index, spiked 11.9% in May compared to a year ago, which had already been strong. This pushed the index, which is not seasonally adjusted, to its highest level for any May since 2006: 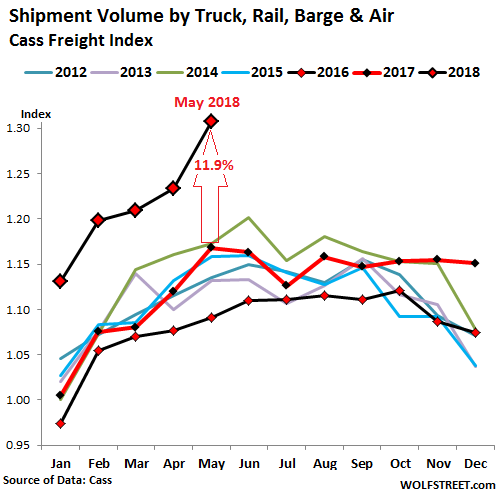 These indices are displaying accelerating strength on top of increasingly difficult comparisons. Demand is exceeding capacity in most modes of transportation by a significant amount. In turn, pricing power has erupted in those modes to levels that continue to spark overall inflationary concerns in the broader economy.

Some of the blame for tight capacity in the trucking sector earlier this year has been directed at the newly required Electronic Logging Devices (ELDs) that record actual drive times by truckers and thus help enforce the legal hourly limits truckers can drive. This hurt capacity and utilization of truckers early on. But Cass points out that “many of the truckers most adversely affected are now beginning to recover some of the loss in utilization through gains in efficiency.”

So the consumer economy is clicking along, and e-commerce is rocketing higher, with all the transportation challenges this causes. Industrial demand on transportation is strong as well.

For this, the weekly DAT Flatbed Barometer is a good indicator, as flatbed trailers are used to haul big pieces of equipment for construction, manufacturing, oil and gas drilling, and the like. Flatbed spot rates have exceeded contract rates since September 2017, according to Cass, citing DAT data. In May, spot prices shot up 26.6% from a year ago, and contract prices rose 10.9%. This excludes fuel surcharge, which skyrocketed 53.8% in May, year-over-year (click to enlarge): 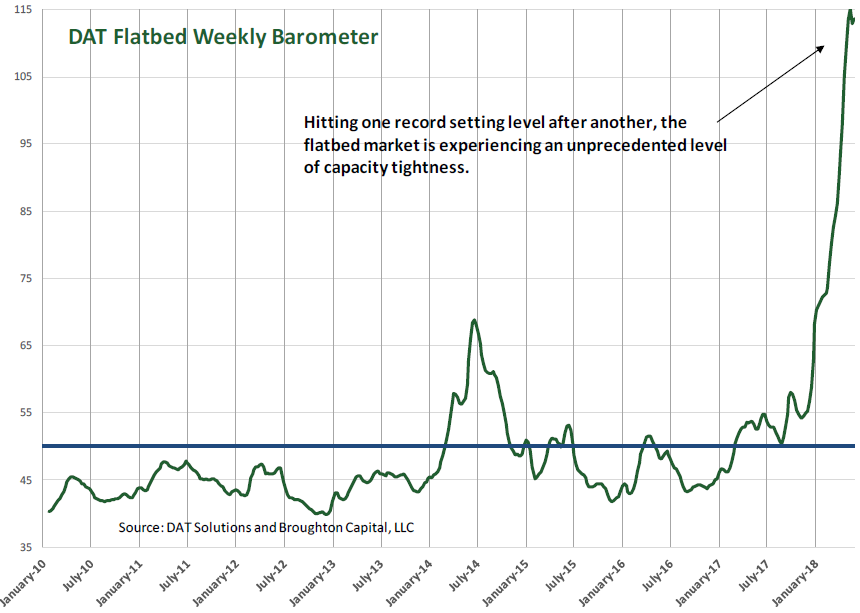 The chart above of the DAT’s Flatbed Weekly Barometer shows an astonishing spike in demand for flatbed trailers. Obviously, what skyrocketed exponentially in this manner is practically begging for the transportation sector’s infamous cyclicality to come around and knock it down again.

“Veterans in this industry are saying this is the best freight market they have ever seen.” Read…  Heavy Truck Industry on Cloud 9, Shippers Face “Capacity Crisis”