Russia, Japan, and the Fed dumped. So who bought?

China’s holdings of US Treasury bonds, notes, and bills, after rising in February and March, fell by $5.8 billion in April to $1.18 trillion. Thus, China’s holdings have remained within the same range since August 2017, despite threats of a trade war and rumors that it would dump US Treasuries. China remains the largest holder, a position it had lost during its era of peak capital-flight from October 2016 through March 2017.

Japan has been systematically reducing its Treasury holdings. In April, it disposed of another $12.3 billion, according to the Treasury Department’s TIC data released Friday afternoon. Over the past six months, it shed $63 billion. Since July 2016 it has slashed its holdings by $123 billion, the lowest since October 2011: 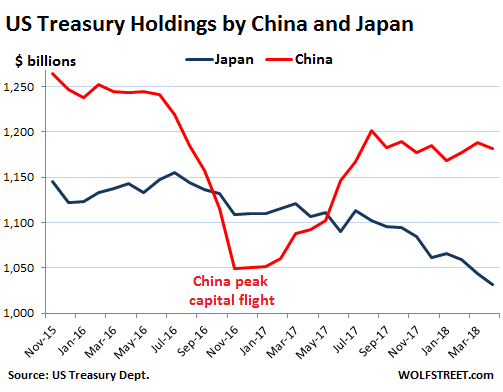 This trend is even clearer when the holdings by China and Japan are expressed as a percent of the US gross national debt: Their importance has creditors to the US, while still large, has been dwindling for two reasons: 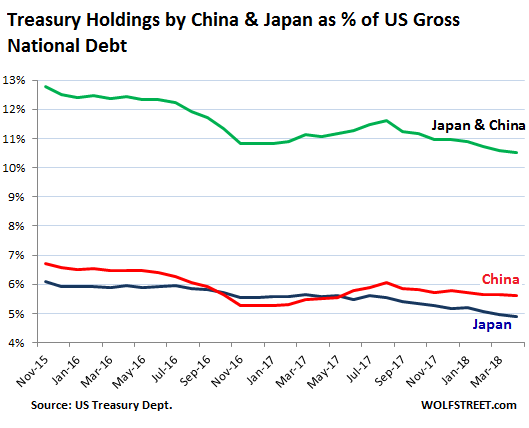 And a sharp-edged curiosity: Russia.

Russia is a rather insignificant holder of US Treasuries. In March it was in 16th place with $96.1 billion in Treasury holdings. But in April, it cut its Treasury holdings in half, to $48.7 billion in one fell swoop, which put it into 22nd place behind the UAE and Thailand. Since August last year, it slashed its holdings by 55%. Some kind of message? 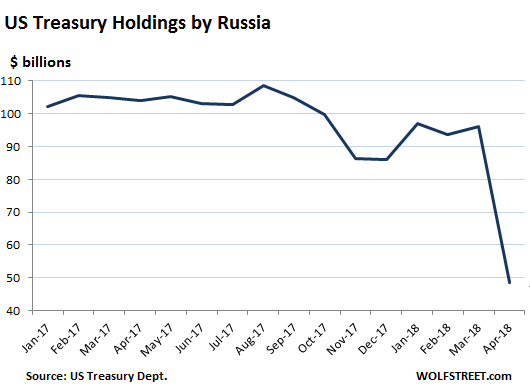 The good thing is that Russia doesn’t have that many Treasuries left to sell – unlike China or Japan. It China and Japan started to pull a Russia, the scenario would be different.

Other countries added to their holdings, and the “grand total” of Treasuries held by official (central banks, governments, etc.) and non-official foreign investors fell by $47.6 billion to $6.17 trillion, smack-dab in the middle of the range of the past year.

Many of the top holders of Treasuries – after China and Japan – are tiny countries or jurisdictions with inexplicably huge balances. They include tax havens and alleged money laundering centers.

For example, Ireland, in third position behind China and Japan. It’s where Corporate American likes to register its “overseas cash.” It held $300 billion of Treasuries in April, about the size of its GDP. But this amount has plunged by $17.5 billion during just the month of April, and is down by $27 billion from January this year, presumably as US corporations began “repatriating” their “overseas cash” by selling those Treasuries and using the proceeds to buy back their own shares.

The largest holders of US Treasuries, after China and Japan.

Germany, fourth largest economy in the world and running a massive trade surplus with the US, only held $86 billion in Treasuries in April. But that was up by $12 billion from March.

So who holds the rest of the US gross national debt?

By the end of April – to stay within the time frame of the TIC data – the US gross national debt had reached $21.07 trillion. This was up by $1.22 trillion from a year earlier! So who bought this $1.22 trillion of new US Treasuries? Someone must have!

The gross national debt and its surge over the 12-month period are split in two ways:

This publicly traded debt of $15.34 trillion was held by these entities at the end of April:

Not the Fed. Its Treasury holdings fell by $70 billion from the beginning of the QE-Unwind through April. Foreign holdings have only picked up $109 billion over the period. Leaves $1.01 trillion that someone else must have bought over those 12 months.

But who? Mostly American institutional and individual investors, directly and indirectly, through bond funds, pension funds, and other ways.

Yields have risen over the past 12 months, and these “risk free” Treasury yields are now competitive with the average S&P 500 dividend yield. For yield investors, Treasuries are a way to lower their risk profile, while earning higher yields than two years ago. In other words, for many American investors, rising yields have made Treasuries attractive.

61 comments for “Who the Heck Bought $1.2 trillion in New US Treasuries over the past 12 Months?”