Some beautiful spikes too.

Prices of houses and condos across the US surged 6.5% from a year earlier (not seasonally-adjusted), according to the S&P CoreLogic Case-Shiller National Home Price Index for March, released today. The index is now 7.8% above the crazy peak of “Housing Bubble 1” in July 2006 just before it all came apart, and 48% above the trough of “Housing Bust 1”: 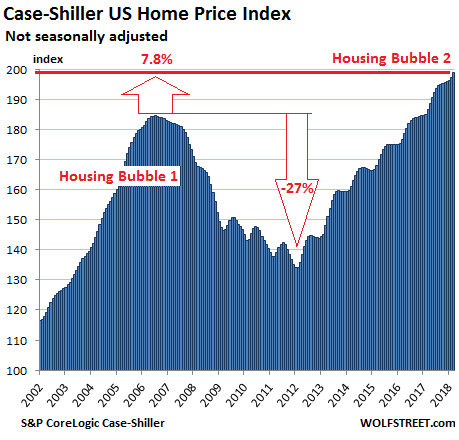 That last housing bubble — “Housing Bubble 1” in this millennium — wasn’t some state of calm that the US needed to return to. It was the definitive housing bubble that then collapsed and helped bring the global financial system to the brink.

The Case-Shiller Index is based on a rolling three-month average; today’s release is for January, February, and March. The index, based on “home price sales pairs,” compares the sales price of a home in the current month to the last transaction of the same home years earlier. The index, which incorporates other factors and uses algorithms to arrive at a data point, was set at 100 for January 2000; so an index value of 200 means prices as figured by the index have doubled.

The Case-Shiller home price index for the Boston metro jumped 1.2% from the prior month, to a new record, and is up 5.8% from a year ago. Note that little dip in the chart late last year, when prices made a feeble effort at a seasonal decline. During Housing Bubble 1, from January 2000 to October 2005, the index soared 82% before dropping. It now tops that crazy peak by 14.7%: 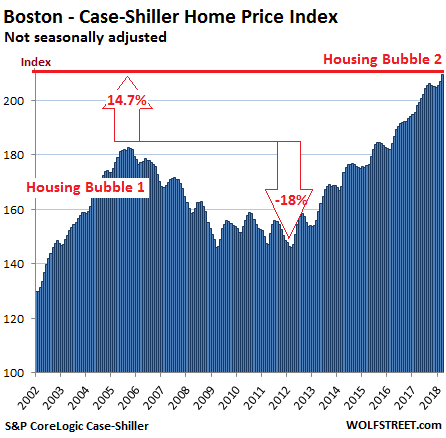 The Seattle metro index spiked 2.8% from the prior month to a new record. Late last year, it had experienced the first monthly declines since the end of 2014, now left behind as seasonal blips. The index soared 13.0% from a year ago and is now 27.4% above the peak of Housing Bubble 1 (July 2007). Note the historic spike over the past two months: 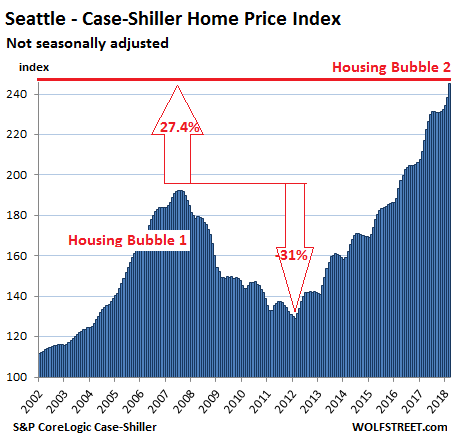 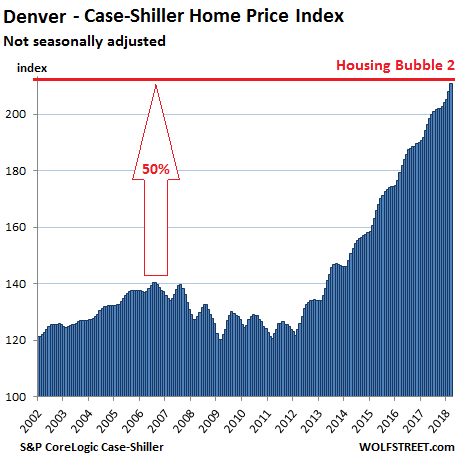 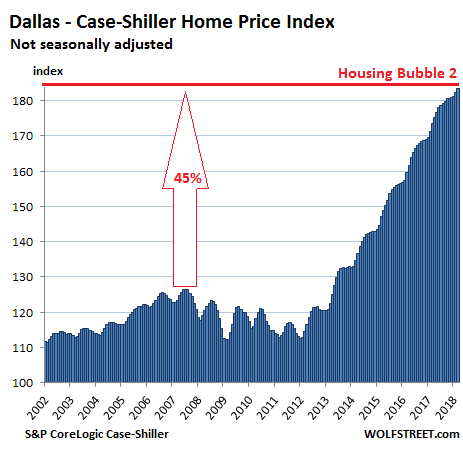 The Case-Shiller index for the Atlanta metro, after a brief seasonal flat spot late last year, rose 0.8% from a month ago and 6.2% from a year earlier. It now exceeds the peak of Housing Bubble 1 in July 2007 by 4.9%: 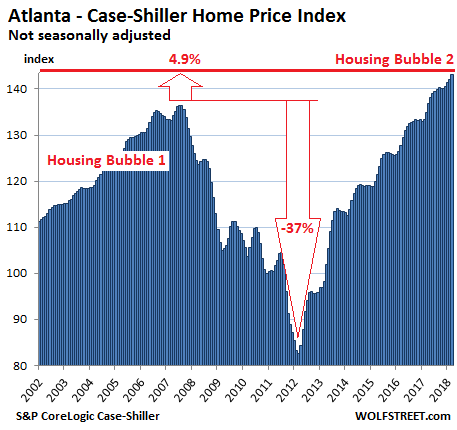 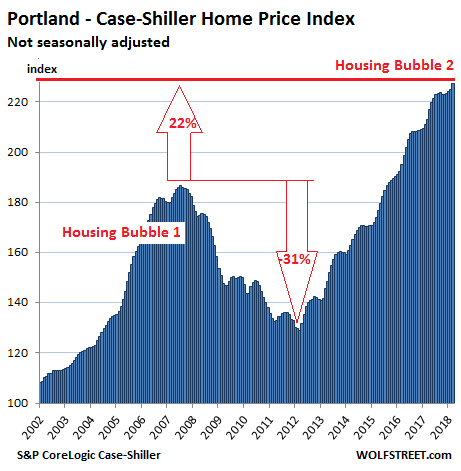 The Case-Shiller home price index for “San Francisco” includes the counties of San Francisco, Alameda, Contra Costa, Marin, and San Mateo, a large and diverse area consisting of the city of San Francisco, the northern part of Silicon Valley (San Mateo county), part of the East Bay and part of the North Bay. The index spiked 2.1% from a month earlier and 11.3% from a year ago. It’s up 37% from the totally crazy peak of Housing Bubble 1, and 162% since 2000: 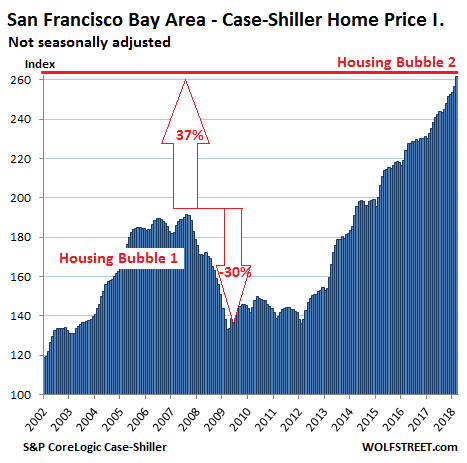 The Case-Shiller index for the Los Angeles metro rose nearly 1% for the month and 8.1% year-over-year. Between January 2000 and July 2006, the index had skyrocketed 174%. The crash was nearly as steep, as the chart below shows. The index now exceeds the peak of the housing insanity in 2006 by 1.6%. So a big round of applause. The Case-Shiller data for neighboring San Diego is very similar. 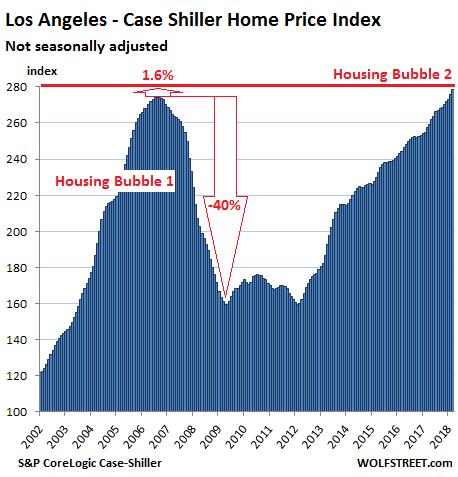 Case-Shiller’s index for condos in New York City rose nearly 0.6% from a month ago and is up 3.4% from a year ago. From 2000 to February 2006, the index had surged 131%. But even during the subsequent bust, its decline was halted when QE kicked in, and along with it the bonuses on Wall Street. Then global investors arrived again, and by 2012, it was once again party time. The index is now 19% above the peak of Housing Bubble 1, having surged 176% in 17 years: 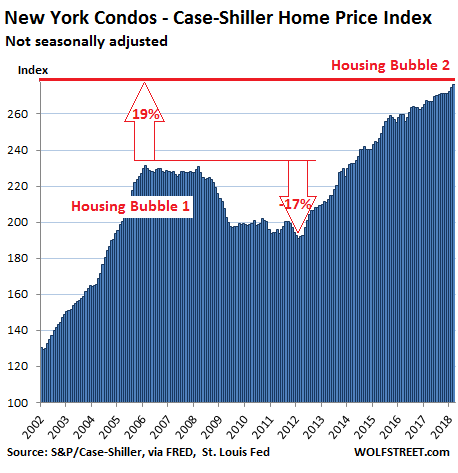 The acceleration in many markets of this home price inflation might well be a reaction to mortgage interest rates that have surged and are scheduled to surge more, as the Fed continues to raise rates “gradually” and as it continues to unwind QE. So households may be rushing to lock in the current rates – and thereby also locking into their own budgets the current prices of Housing Bubble 2.

Here’s the impact of higher mortgage rates on home buyers in dollars and cents. Read…  What Will Surging Mortgage Rates Do to Housing Bubble 2?