The impact on homebuyers and the market, in dollars and cents.

The average interest rate for 30-year fixed-rate mortgages with conforming loan balances ($453,100 or less) and a 20% down-payment jumped to 4.86% for the week ending May 18, the Mortgage Bankers Association (MBA) reported this morning. This is up from 4.73% a month ago (chart via Trading Economics, red marks added). On the way to 5%: 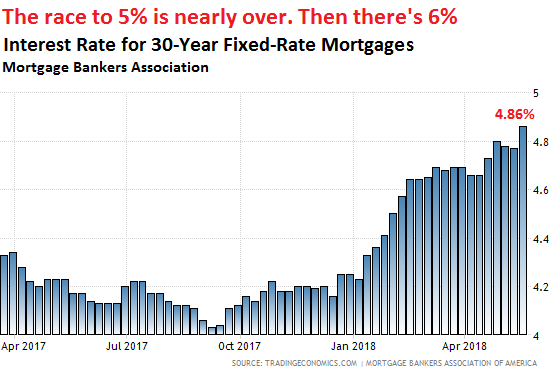 The MBA obtains this data from weekly surveys of over 75% of all US retail residential mortgage applications handled by mortgage bankers, commercial banks, and thrifts.

This average 30-year fixed rate of 4.86% was the highest rate since April 2011, now exceeding for the first time the spike during the Taper Tantrum in 2013. In 2018 so far, this measure of the average mortgage rate has risen by nearly 60 basis points (chart via Trading Economics): 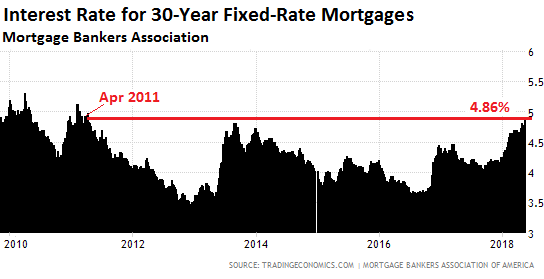 The MBA reported more mortgage achievements in the race to 5%:

“Points” – upfront fees, such as the lender’s origination fee, often rolled into the mortgage balance – are rising too:

While still historically low, 6% would face an entirely different environment this time around: Since 2008, the last time this measure of mortgage rates was 6%, home prices that have surged – in some of the hottest markets by over 50%, according to the Case-Shiller Home Price Index. This price surge was made possible in part by plunging mortgage rates.

Will rising mortgage rates unwind some of those price gains? And what’s the impact on home buyers?

We can look at rising mortgage rates in terms of how they would bump up the monthly mortgage payment on a given home price. In other words: How much more would the household have to pay a month to buy the same home at a higher rate?

More realistically, most households have budgets for housing. They can spend up to a certain amount a month and no more. Given these budget constraints for many households, higher mortgage rates translate into buying lower-priced homes: How much cheaper would the home have to be so that the household can afford it at the higher mortgage rate?

In other words, how far would they have to climb down the ladder of their dream-home aspirations when mortgage rates are rising? A very realistic question for homebuyers – and a potentially brutal question for the market.

I got started on this train of thought by David in Texas who sent me a model to test different mortgage rates and budgets (to simplify, we will ignore the thorny issue of down payments).

Example 1: Household budget for mortgage payment is $1,200 a month. With a 30-year fixed rate mortgage:

Example 2: Household budget for mortgage payment is $3,500 a month. With a 30-year fixed rate mortgage:

Example 3, for cities like San Francisco, where this reflects the median home price: Household budget for mortgage payment is $6,000 a month. With a 30-year fixed rate mortgage:

Via this transfer mechanism – the fact that most homebuyers have budgets they cannot exceed – higher mortgage rates push down home prices if it is allowed to run long enough. This is why I think a 30-year rate of 5.5% will create some ruffles in the market, and 6% will cause pain.

But nothing is quite that simple. As rates are rising, homebuyers are trying to lock in current rates before they rise further, and demand for mortgages continues to be strong. The MBA’s Purchase Index, which tracks the number of mortgages taken out to purchase a home (as opposed to refis), increased 3% compared to the same week a year ago and has been consistently higher so far this year compared to the same time last year.

In San Francisco, there are plenty of homes for sale, at ludicrous prices for what you get. But asking prices are now getting “reduced.” Read… Graphic Details of the Crazy Housing Bubble in San Francisco, According to Zillow

93 comments for “What Will Surging Mortgage Rates Do to Housing Bubble 2?”