And its eerie exhortations to the banks to prepare for a downturn to avoid “undue disruption to the financial system.”

It remained mostly unmentioned that this increase in profits came after the huge charge-offs banks took in the fourth quarter mostly due to write-downs of tax assets, also a result of the new tax law. These write-downs slashed bank profits in Q4 to $25 billion, the worst quarter since the Great Recession.

Overall, Q1 was really exciting. Banks were firing on all cylinders, according to the FDIC: Net income jumped, loan balances rose, net interest margins improved, and the number of “problem banks” edged down. But worries are creeping up:

The interest-rate environment and competitive lending conditions continue to pose challenges for many institutions. Some banks have responded by “reaching for yield” through investing in higher-risk and longer-term assets.

Going forward, the industry must manage interest-rate risk, liquidity risk, and credit risk carefully to continue to grow on a long-run, sustainable path.

The industry also must be prepared to manage the inevitable economic downturn, whenever it comes, smoothly and without undue disruption to the financial system.

I added the bold. This is a goodie. We had an “undue disruption to the financial system” during the last downturn, and we don’t want another one, the FDIC says.

“Undue disruption” would be when banks stop lending. That’s when credit freezes up in a credit-dependent economy. Everything comes to a halt. Paychecks start bouncing. So, don’t do that again.

The long-term objective for banks should be to position themselves during periods of good economic and banking conditions, as exist today, to be able to sustain lending through the economic cycle so that the industry can play a counter-cyclical role, and not a pro-cyclical role as occurred during the financial crisis.

“Pro-cyclical role” means banks made things worse during the last downturn. So don’t do that again, it says.

These warnings about the end of the credit cycle don’t come out of the blue. We have seen in other data that defaults in subprime auto loans and subprime credit card loans are already surging. Those are early flags that the credit cycle has entered the next phase.

And then comes “Chart 8” in the FDIC’s presentation, which depicts the nicely behaved number of banks on the FDIC’s “Problem Bank List” (blue line, left scale), and the red bars… OOPS! The “Assets of Problems Banks” (right scale) more than tripled in the quarter to $56.4 billion: 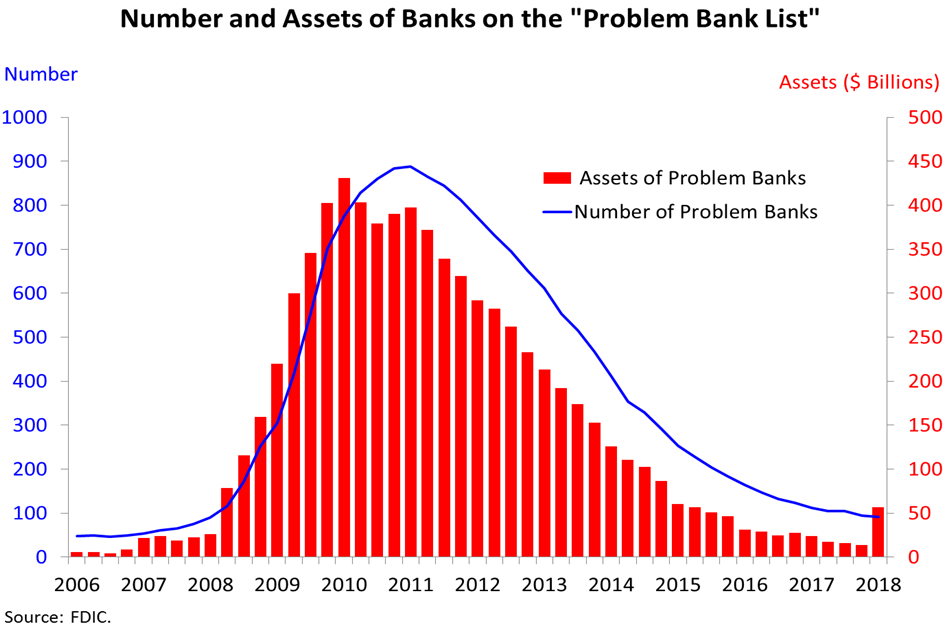 This doesn’t mean the financial system is going to collapse in Q2. But it does show that the three new banks that were added to the “Problem Bank List” were bigger banks with a lot more assets. This is the same kind of jump seen in 2008.

It confirms the other early indications that the credit cycle has definitely moved on to the next phase. The FDIC is not oblivious to it, and its risks:

[A]n extended period of low interest rates and an increasingly competitive lending environment have led some institutions to reach for yield. This has led to heightened exposure to interest-rate risk, liquidity risk, and credit risk.

In addition, with the current expansion in its latter stage, the industry needs to be prepared to manage the inevitable downturn, whenever it may occur, in order to avoid financial system disruption and sustain lending through the economic cycle.

I added the bold. The FDIC just cannot stay away from the phrase, “avoid financial system disruption.”

87 comments for “Oops, It’s Starting, Says This Chart from the FDIC”