In the first quarter, the delinquency rate on credit-card loan balances at commercial banks other than the largest 100 – so at the 4,788 smaller banks in the US – spiked in to 5.9%. This exceeds the peak during the Financial Crisis. The credit-card charge-off rate at these banks spiked to 8%. This is approaching the peak during the Financial Crisis.

A sobering set of numbers the Federal Reserve Board of Governors released this afternoon.

These large banks have been offering appealing incentives to consumers for years, and they’ve been going after consumers with the higher credit ratings, and they’ve been following good underwriting practices – having not yet forgotten the lesson from the last debacle – and this conservative approach is now helping to keep losses down.

But the thousands of smaller banks couldn’t compete with those offers, and so they got deeply into subprime cloaked in sloppy underwriting. This way, they were able to reel in new credit-card customers that the big banks didn’t want, and those customers needed the money and charged up their new cards in no time, and the interest rates of 25% or 30% looked good on the banks’ income statement and helped maximize executive bonuses, yes even at smaller banks.

But turns out, those banks had reeled in the most fragile customers and had eagerly doused them in irresponsible levels of debt at usurious interest rates – and now what? These customers won’t ever be able to pay off the balances or even pay the interest. For many of them, there’s only one way out. This caused the delinquency rate to spike from 3.81% to 5.90% in just three quarters.

This chart shows delinquency rates for the largest 100 banks (blue line) and for the remaining 4,788 banks (red line): 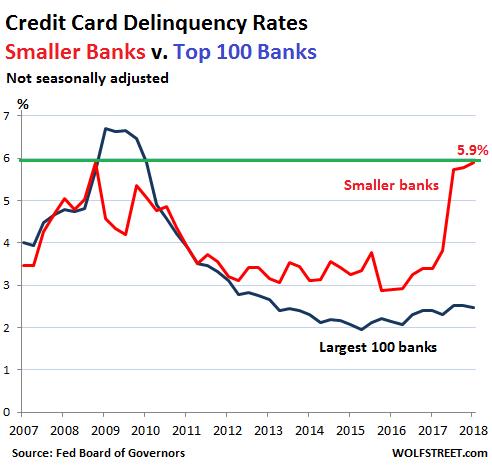 The bank tries to collect these delinquent loans, and some customers are able to catch up. Others are not. After recovering what it could, the bank moves the remaining delinquent balance out of the delinquency basket and into the charge-off basket. This is when the loan is “charged off” against loan loss reserves.

These charge-offs among the largest 100 banks rose to 3.73% in Q1 (not seasonally adjusted), the highest since the first quarter 2013. 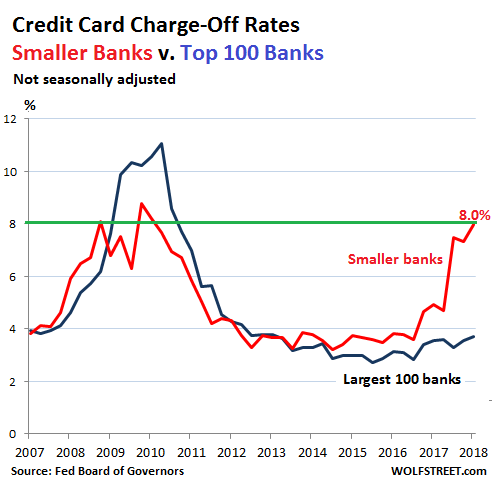 Both charts show that the largest 100 banks had suffered massive losses during the Financial Crisis as their credit card loans blew up, and as consumers, many of whom had lost their jobs, could no longer keep up with their credit card debts.

The smaller banks had been more conservative leading up to the Financial Crisis, and their delinquency and charge-off rates had been somewhat less catastrophic.

The difference between then and now is that back then, unemployment was heading toward 10% and millions of people had lost their jobs; now the unemployment rate is near historic lows and the economy is humming. Yet already the smaller banks are booking these losses on their credit card portfolios. What will they do when the economy ever slows down?

That was a rhetorical question.

In the overall scheme of things, these 4,788 smaller banks hold only a small portion of all banking assets, including credit card balances. Of the $1 trillion in credit debt outstanding, these small banks hold only a fraction. So they won’t jeopardize the US financial system. And that’s why the Fed, as banking regulator, is relatively sanguine about these dizzying charge-off rates at the smaller banks.

But the surge in charge-offs at these banks points at something fundamental: Credit problems at the margin. The consumer spending binge in recent years has been funded not by surging incomes at the lower 60% of the wage scale, where real wage stagnation has reigned, but by borrowing – particularly via credit cards and auto loans. Both of them have turned sour at the margins. And these are still the best of times.

Only about half of retail is under attack from e-commerce, but that half is getting crushed. Read… Brick & Mortar Meltdown Pummels These Stores the Most

84 comments for “Credit Card Delinquencies Spike Past Financial-Crisis Peak at the 4,788 Smaller US Banks”