Prices of houses and condos across the US surged 6.3% from a year earlier (not seasonally-adjusted), according to the S&P CoreLogic Case-Shiller National Home Price Index for February, released this morning. The index is now 6.7% above the crazy peak of “Housing Bubble 1” in July 2006 just before the hot air hissed out, and 47% above the bottom of “Housing Bust 1”: 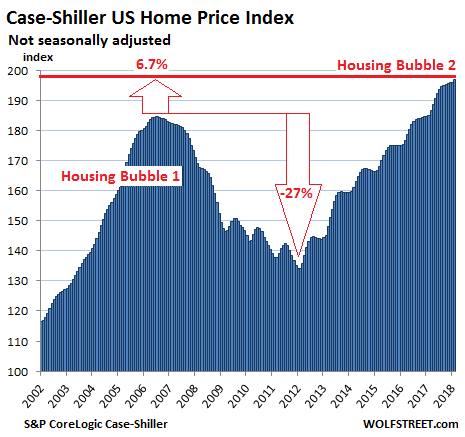 Real estate is local though prices are also impacted by national and global factors — such as monetary policies and offshore investors who consider US housing as an asset class and escape route — as well as by local factors. Together they create local housing bubbles. As local housing bubbles accumulate, even as some housing markets remain in the doldrums, they turn into a national housing bubble, as depicted in the chart above.

The Case-Shiller Index is based on a rolling three-month average; today’s release is for December, January, and February. The index, based on “home price sales pairs,” compares the sales price of a house in the current month to the last transaction of the same house years earlier. The index then incorporates other factors and uses algorithms to arrive at a data point. The index was set at 100 for January 2000; so an index value of 200 means prices as figured by the index have doubled.

The Case-Shiller home price index for the Boston metro jumped 0.7% on a monthly basis, to a new record, after two months of increases that followed three declines in a row, that had followed a 22-month surge during which the index defied not only gravity but also normal seasonal variations. The index is up 5.7% from a  year ago. During Housing Bubble 1, from January 2000 to October 2005, the index had skyrocketed 82% before dropping. It now tops that crazy peak by 13%: 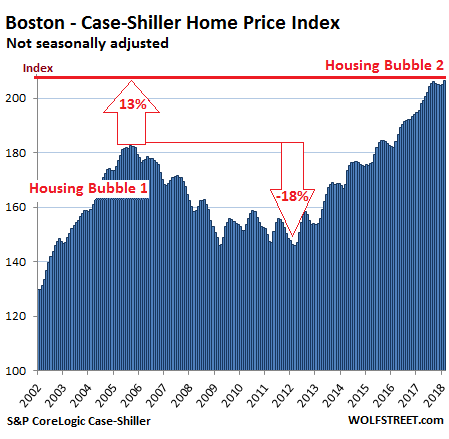 The Seattle metro index jumped 1.7% on a month-to-month basis to a new record. Late last year, it had experienced the first monthly declines since the end of 2014. But that was just a seasonal blip. The index soared 12.7% from a year ago and is now 23.9% above the peak of Housing Bubble 1 (July 2007): 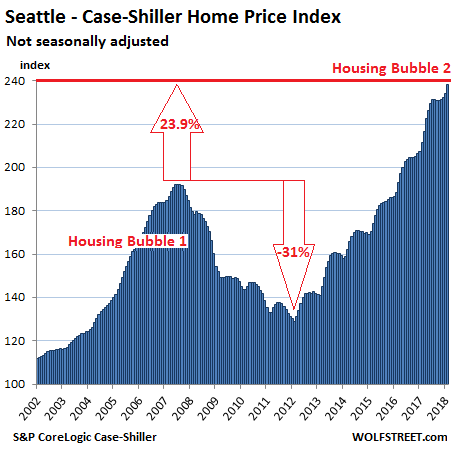 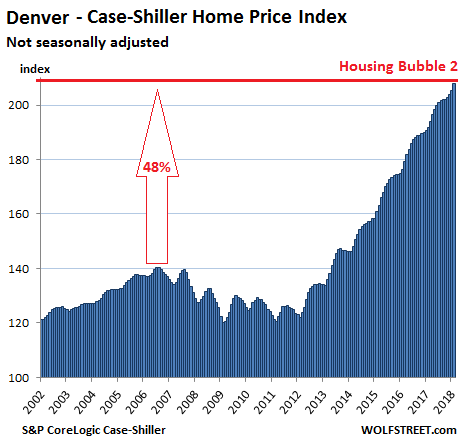 The Dallas-Fort Worth metro index rose 0.6% on a monthly basis, its 49th consecutive increase, and 6.4% year-over-year. Since its peak during Housing Bubble 1 in June 2007, the index has surged 44%: 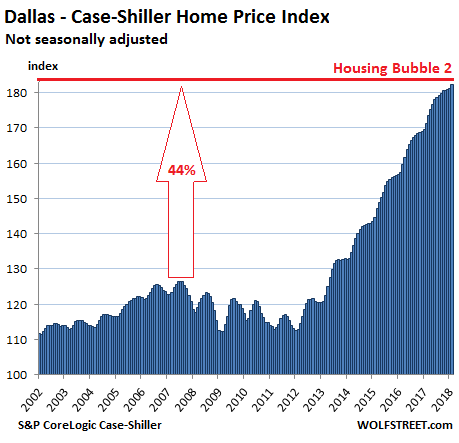 The Atlanta metro index, after going through a seasonal four-month flat spot, is on the rise again. It ticked up 0.4% on a monthly basis and rose 6.5% from a year ago. It now exceeds the peak of Housing Bubble 1 in July 2007 by 4.3%, having surged 72% since the bottom of Housing Bust 1 in February 2012: 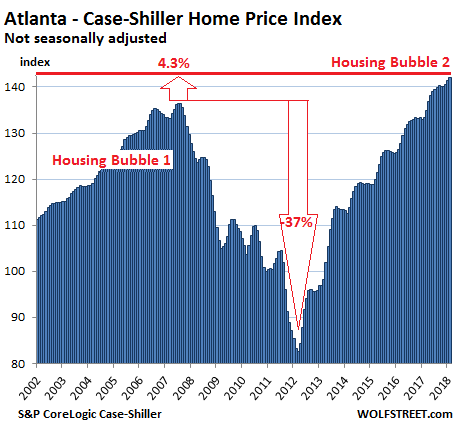 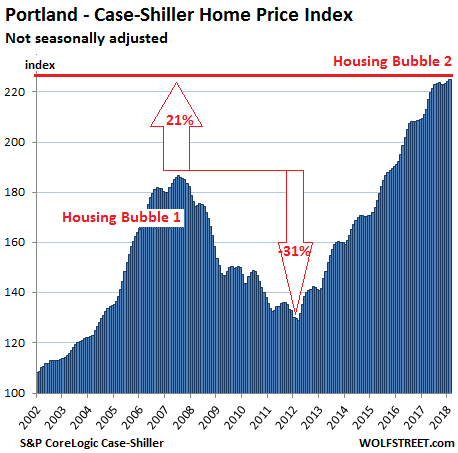 The Case-Shiller home price index for “San Francisco” covers the counties of San Francisco, Alameda, Contra Costa, Marin, and San Mateo, a large and diverse area that includes the city of San Francisco, the northern part of Silicon Valley (San Mateo county), part of the East Bay (the counties of Alameda and Contra Costa) and part of the North Bay (Marin county). The index surged 1% on a monthly basis and 10.1% year-over-year. It’s up 33.4% from the crazy peak of Housing Bubble 1, 93% from the end of Housing Bust 1, and 156% since 2000: 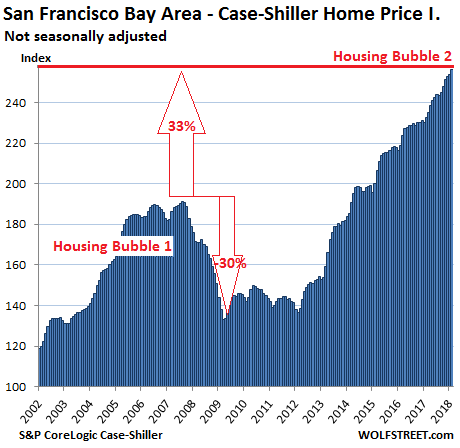 The Los Angeles metro index accomplished a major feat: it set a new record for the first time since July 2006. It jumped 1% for the month and 8.3% from a year ago. During LA’s Housing Bubble 1, home prices surged 174% between January 2000 and July 2006. The the subsequent crash was nearly as steep. The index now exceeds for the first time the peak of the housing insanity in 2006. The chart for neighboring San Diego looks nearly identical, though the absolute numbers of the index are a little lower. 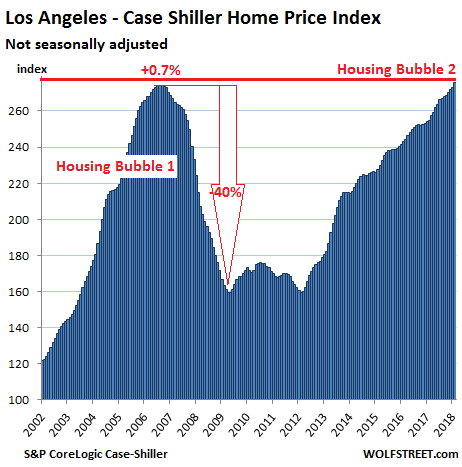 Case-Shiller’s index for condos in New York City rose nearly 1% month-to-month and is up 3% from a year ago. From 2000 to February 2006, it soared 131%, and then declined. But QE kicked in, and so did the bonuses on Wall Street, and global investors arrived too. By 2012, the condo market was rising again. The index is 19% above the prior peak, having surged 175% in 17 years:

Did the individual houses and condos underlying the charts above get bigger or nicer as their prices surged? Nope. They got older. That’s all. This type of home price inflation is a monetary phenomenon where the dollar loses its purchasing power with regards to homes, which had been the Fed’s well-communicated plan since late 2008. Since there has been little wage inflation, the value of labor, denominated in those dollars, has been crushed with regards to housing. Hence the current “affordability crisis,” or as it’s now called in many cities, “housing crisis.” Asset price inflation is a free lunch only for some. The others pay for it.

And if this doesn’t suit the millennials, who’re now entering the housing market for the first time, they can go to the Fed and complain. Read…  This is How First-Time Buyers Get Squeezed by Rampant Home Price Inflation