Millennials can go to the Fed and complain.

Home prices have been surging in many markets, mortgage rates have been rising, and incomes have plodded along with little growth, and the disconnect is getting bigger and bigger. This is not a problem for well-to-do Americans who’ve owned a lot of assets and benefited from the rampant asset price inflation over the past eight years, but it is a problem for those trying to buy a home based on their wages, especially first-time buyers, which now include more and more millennials.

Freddie Mac reported on Thursday that its weekly average 30-year fixed mortgage rate rose to 4.47%, the highest since January 2014, which is still very low historically. On Friday, the average 30-year fixed mortgage rate for top tier borrowers rose to 4.58%, according to Mortgage News Daily, on a day when the Treasury 10-year yield surged to 2.96%, the highest since 2014.

This comes to the drumbeat of ballooning home prices [Update on the Most Splendid Housing Bubbles in the US].

So, the monthly costs of an “entry-level home” on a nationwide basis surged 9% in March from a year ago, according to a note by John Burns Real Estate Consulting Senior Research Analyst Devyn Bachman.

The report defined “entry-level home” as one that sells for 80% of the median price (resale and new) in that particular market. It assumed a 5% down-payment and a 30-year fixed-rate mortgage for the remainder. The monthly costs include principal, interest, taxes, insurance, and private mortgage insurance. But they do not include maintenance and other costs associated with owning a home.

In the San Francisco Bay Area – a diverse area that includes San Francisco, Silicon Valley, much of the East Bay, and parts of the North Bay – the monthly costs of this entry-level home surged 14% in March compared to a year earlier, to $4,673!

This is the highest monthly cost of any major Metropolitan Statistical Area in the US. But this is based on the median price of a large and diverse area. In some cities within the Bay Area, monthly costs of the “entry-level home” are lower, in others far higher.

For example, in San Francisco, where the median home is $1.4 million, and the “entry-level home” $1.12 million, the monthly mortgage payment (interest and principal) would come to about $5,400 for an entry-level home. Property taxes would come to about $1,365 a month. Plus insurance and private mortgage insurance. So pretty soon, this “entry-level home” costs about $7,000 a month, or $84,000 a year, not including utilities, maintenance, and other expenses. If it’s a condo – and at this price, it certainly is a condo – the homeowner association fees will have to be added on top.

This is why even the median Facebook employee (not to be confused with its contract workers), making over $240,000 a year in total compensation before income taxes, is feeling the squeeze.

In the Seattle metro, the monthly costs of the entry-level home jumped 13% from a year ago to $2,790 – the second highest in the country.

The report finds that in the San Francisco Bay Area and in the Seattle metro, “home buyers have become overly exuberant.” To put it mildly.

In the vast and divers New York City metro area, the costs of an entry-level home inched up 1% to $2,634 – third highest in the country.

However, the median price in Manhattan was $1.1 million in Q1 and the average price was nearly $2 million, according to the Elliman Report. Within Manhattan, there are huge differences. In TriBeCa, the most expensive spot, the median sales price was $3.6 million, according to PropertyShark. In SoHo, it was $3.2 million, in the West Village it was $2.3 million. These are condos or coops. Talk about “overly exuberant” home buyers.

There simply are no “entry-level homes” in these neighborhoods. This is the case in many areas of Manhattan. So just forget it.

Of the largest 31 metro areas, 23 have an affordability problem that is “notably worse than the long-term norm,” the report finds.

So here’s Burns’ list of the monthly housing costs of the top 31 metros, in order of their year-over-year percentage increases. The San Francisco Bay Area is at the top with a 14% jump in costs. The New York and Washington D.C. metros are at the bottom with increases of 1% (I added the red marks): 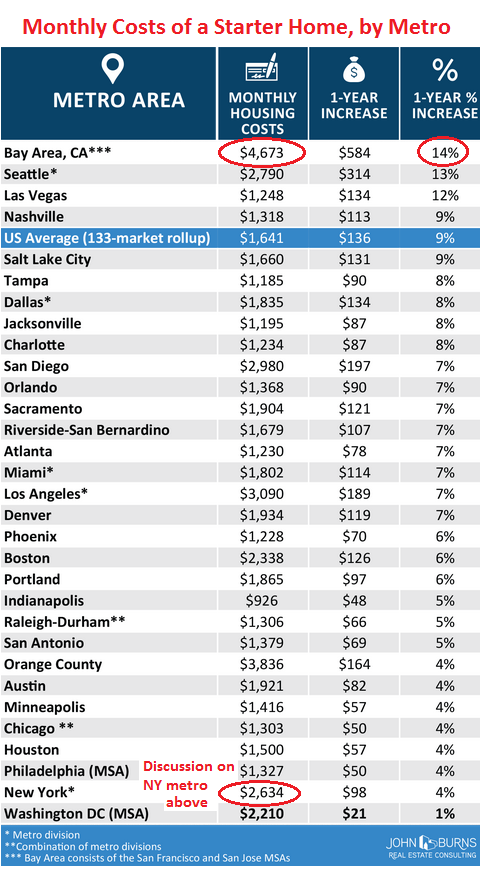 “In conclusion, home buyers can afford less homes today than they could one year ago,” the report says. This is the effect of rampant asset price inflation. It hits real life in this way:

So first-time buyers, having missed out on the home-price surge of the past eight or so years – this includes most millennials – bear the brunt of the costs of this asset price inflation in the housing market. That lunch was free for some. But others are paying for it. And those folks, including the millennials, can go to the Fed and complain about it since it was the Fed that set out to “heal” the housing market after the Financial Crisis by purposefully inflating home prices – or more precisely, devalue the fruits of labor for buying assets.

Bonds, junk bonds, spreads, commercial real estate, leveraged loans, over-leveraged companies… all get named as risks to the banks. This is why “gradual” tightening will continue for a long time. Read… Now Even a Fed Dove Homes in on the “Everything Bubble”