The GM plant in Lordstown, Ohio, which only builds the Chevy Cruze compact car, already went through layoffs in 2017 when it trimmed its three shifts to two shifts and cut 1,200 workers, due to what GM said at the time was change in consumer preference from cars to SUVs, crossovers, and pickups.

These cuts brought the workforce at the Lordstown plant down to about 3,000 employees — 2,700 hourly and 300 salaried. Now the number is going to get cut in half.

In a 3 p.m. meeting on Friday between employees and management, workers learned that production will be further cut to just one shift, according to 21 News WFMJ in Ohio, based on “several sources inside the meeting.” Approximately 1,500 positions will be eliminated.

In response to the rumors, GM Lordstown spokesperson Thomas Mock later issued a statement, confirming the elimination of one shift for “late in the second quarter,” due to “lower customer demand for compact cars.”

And then the spokesman blamed lower fuel prices and “an improving economy” for the layoffs:

Industry-wide, the U.S. small car market has been on a steady decline since 2014 due in large part to a shift in consumer demand for crossovers, trucks and SUVs. Lower fuel prices and an improving economy are both contributing to this trend.

Earlier in April, GM reported that Cruze sales in the US over the first three months had dropped 26% from the same period last year. Overall, Cruze sales in the US have been sliding since their peak in 2014. This chart shows average monthly Cruze sales for each year, which have plunged 42% since 2014 (underlying monthly sales data via GM Authority): 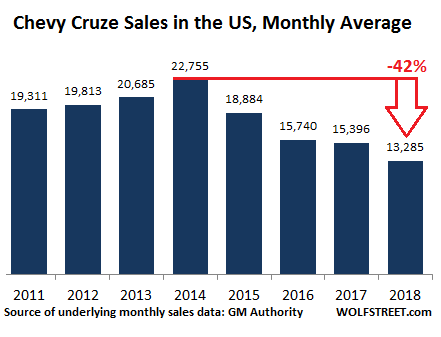 For the industry overall, car sales so far this year are down 10% from last year. Last year, they were down 11% from 2016. In 2016, they were down 8% from 2015. Throughout, sales of “trucks” have boomed, as consumers have switched from cars to SUVs and to compact SUVs (crossovers), which are based on a car chassis but are classified as “trucks.” A good dose of $6 or $7 gasoline might halt or reverse that process — or might instead push consumers into electric vehicles.

During the Friday meeting, employees were told that the company would offer a $60,000 buyout to workers who are nearing retirement and a smaller buyout to workers with less seniority, according to 21 News WFMJ. Informational meetings are scheduled for next week to notify workers of the buyout options.

There is another wrinkle to this story. In March 2015, GM announced a $350 million investment at its plant in Ramos Arzipe, Mexico, in order to start building the Cruze at that plant. The Cruze is sold in 100 countries and built in about seven countries, including Mexico and the US, and production at the Lordstown plant wouldn’t impacted by production in Mexico, GM said. At the time, the Lordstown plant was running three shifts. So OK.

In January 2017, Car and Driver reported that Mexico-built versions had started showing up at US dealers. GM then confirmed that about 8,400 Cruze sedans had been brought in from Mexico between September and November 2016 to “satisfy demand during the fall launch of the 2017 model.”

Which is a confusing sort of demand because Cruze sales fell 17% in 2016 from 2015, despite incentives being heaped on the car to get it moving. In early 2017, the third shift at the Lordstown plant was eliminated. And now the second shift will be eliminated. Leaving just one shift and an iffy future for the plant.

62 comments for “More Carmageddon at GM, Cuts Shift in Ohio, 1,500 Layoffs, as Cruze Sales Plunge. Production in Mexico Started in 2015”