Last December, we changed dental insurance. The new insurer included in its offering a set of “free” electric toothbrushes, the vibrating “sonic” kind called evocatively “Beam Brush.” One for each of us. My wife chose the colors when she ordered the brushes, as you will notice in a moment.

Electric toothbrushes are nothing new. We had one at home when I was a teen.

What’s new is this:

The app on the smartphone does all the good stuff, such as adjusting the speed of the brush. And off the data goes into the cloud.

So forget that thing. When the box arrived in January, we put it unopened into the closet to be forgotten. 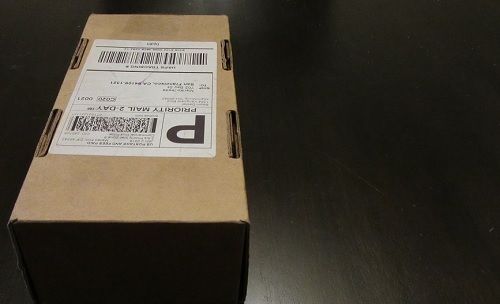 Three months later, we get a second and nearly identical box: 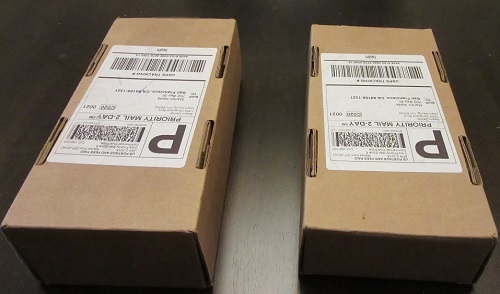 This was a gentle reminder that these brushes were “free” for a reason, and that therefore we had to connect them to the internet and use them, and that the company knew we hadn’t opened the first box because the brushes hadn’t beamed, so to speak, any data back to Beam. The brushes were part of the deal, and we better set them up, download the app, and beam back data from the inside of our mouths – that was the message.

We dilly-dallied around for a week or so. But last night, after we double-checked to make sure Bluetooth was turned off on our phones, we opened the first box: 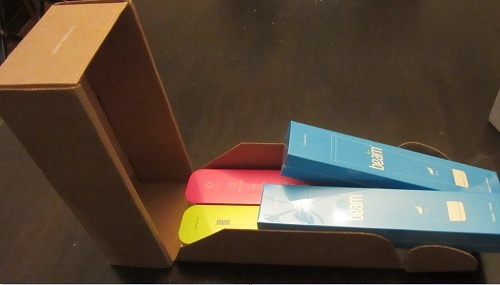 It contained two tubes of special toothpaste, two rolls of floss, and the two toothbrushes, each in its own color-coded box, greenish-yellow for me and pink-red for her. OK, cool colors, I get it. Note the paring knife, which was not included: it was needed to remove the shrink-wrap that was around each individual item: 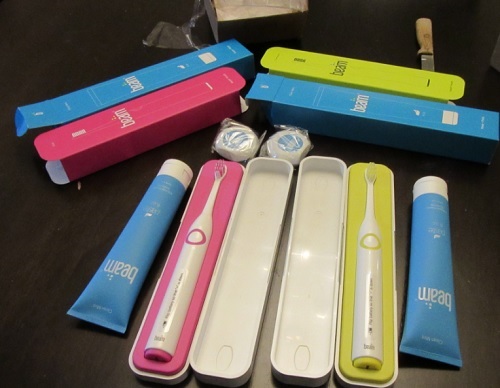 And there were the instructions. They came in two forms. Here’s the big print, a sheet that was right there. It shows what to do first. So this would be easy. 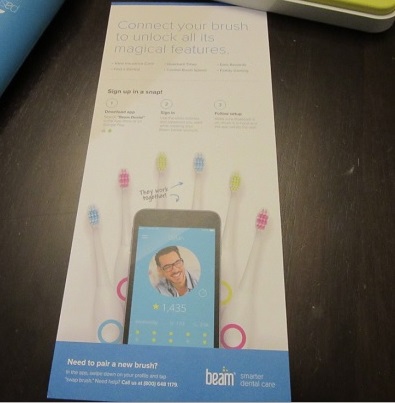 “Connect your brush to unlock all its magical features,” it says at the top. And here are the tree steps:

Once the thing is set up, you have all kinds of awesome options via this app, it says: “View Insurance Card, Find a Dentist, Quadrant Time, Control Brush Speed, Earn Rewards, Family Gaming.” This is going to be fun. Got it?

Not quite so obvious was the second set. It’s printed on the inside of the cardboard box that the plastic toothbrush box was in, and you have to tear the box apart and unfold it: 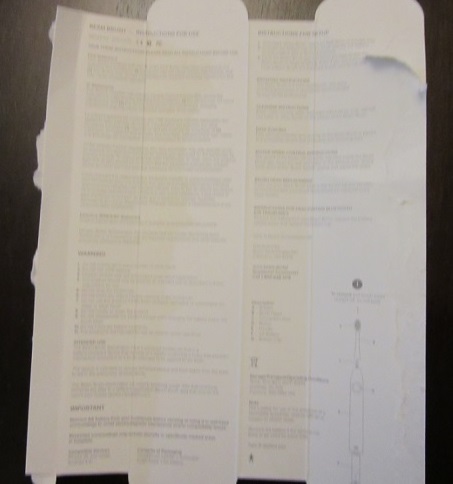 In very small print, it lists the standardized warnings (for example, “Do not submerge or place in water or other liquid”), instructions for setup, brushing of teeth, adjusting the speed via the app, and cleaning of device. Buried in the middle of the list, it also includes this little paragraph:

“Data Syncing: Data will automatically sync as long as the Beam Brush is pared to a compatible device that is sending and receiving data.”

That “compatible device would be the smartphone with the app.

And there’s the part you certainly are not supposed to read because it’s the compliance language about radio interference, compatibility with US, Canadian, and European standards, in English and French, etc., etc. No one reads this stuff. So I read it because this is a “free” toothbrush, and I better read everything.

I find the real name of the device: “Usage Monitoring Sonic Toothbrush.” And this gem:

The Beam Brush (Generation 2) collects brushing usage data that wirelessly transmits the data to a software application (Beam Brush App) that runs on the user’s own mobile device (“smartphone”).

Is there a microphone in the toothbrush? It wouldn’t say.

It wouldn’t be the first time that an Internet-connected microphone was hiding inside a harmless-sounding product, such as a doll that “chatters about horses and hobbies” and could be “eavesdropping on your child.”

So we’re using the device without app and Internet connection. Beam is still thinking we’re not using it because we’re not uploading our data to the cloud and considers us in violation of the “free” deal. We’re expecting a series of emails that start out gently, and every two weeks or so get increasingly emphatic, telling us that we better start setting up the Internet connection to our toothbrushes and start sending our data to the cloud.

What’s next? The day when we cannot get the best dental insurance without Internet-connected toothbrush.

There are many people who think nothing of it. They laugh at us. For them, we’re fossils that just cannot grasp the modern world where private life takes place on the Internet and is stored forever in the cloud. Formerly innocuous devices like toothbrushes, dolls, TVs, thermostats, fridges, mattresses, or toilet-paper dispensers, that are everywhere around the house, will see to it that more and more personal and even intimate data gets uploaded to the cloud as the Internet of Things invades not only our home but our body cavities.

For now, our household is still able to at least partially block this intrusion. But there will be a day when we will be forced to surrender our data to get health insurance, drive a car, or have a refrigerator and a thermostat in the house. This is where this is going. Why? Because data is where the money is. And because many consumers are embracing it.

After all we’ve learned over the years about Facebook, and particularly recently, where’s the panicked rush to “delete” Facebook accounts? Read… Then Why Is Anyone STILL on Facebook?

146 comments for “Our Dental Insurance Sent us “Free” Internet-Connected Toothbrushes. And this is What Happened Next”