Well, they do pay higher rates, but not to their own clients.

Interest rates from the very short-term through two-year maturities have surged since the Fed got serious about raising rates. In terms of the Treasury market, for example, the three-month yield is now at 1.76% and the two year yield at 2.37%: 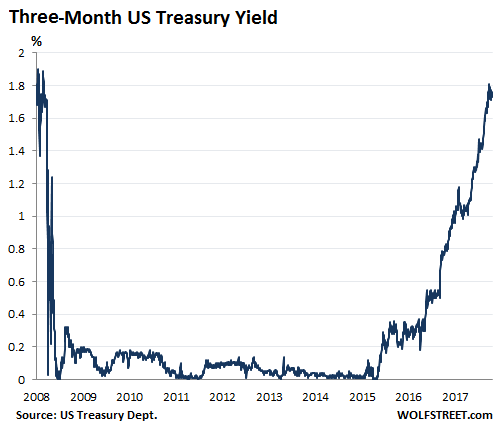 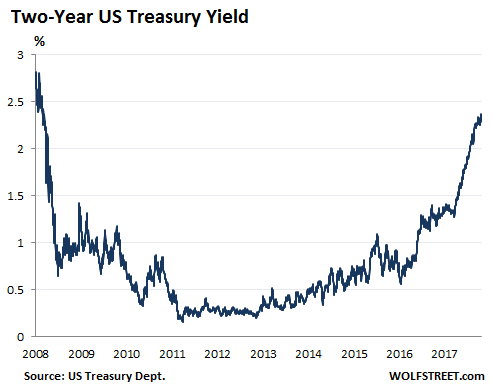 And the interest rates that banks offer on deposits should in theory be about in line with Treasury yields in a competitive market. For example, a three-month FDIC-insured CD, which is roughly equivalent to a three-month Treasury bill in terms of risk, should offer a rate similar to the 3-month treasury yield of 1.76%. A one-year CD should offer around 2.1%, a two year CD around 2.4%.

The interest it pays on checking and savings accounts is so minuscule it’s not even worth looking at. Clearly, the bank doesn’t want to pay its existing clients more for the money they already have in their accounts at the bank.

Brokers sell so-called “brokered CDs” like they sell bonds. But it’s a lot easier to buy CDs than bonds. And my broker doesn’t even charge a fee for selling CDs, which is not the case with bonds. And you can sell these “brokered CDs” in the secondary market through your broker – as you would sell a bond – if you need to have the cash, though in an environment of rising interest rates, selling CDs and bonds usually involves capital losses.

At my brokers, all kinds of other banks offer CDs in the one-year range at a rate of 2.1% or higher, including Morgan Stanley Bank and UBS.

And banks at my broker are offering two-year CDs at 2.6% or higher, including my own bank, plus a slew of others such as Morgan Stanley, Citibank, Goldman Sachs, Ally Bank, and so on.

And five-year CDs are offered at 3.1% by Sallie Mae Bank and Synchrony Bank, and at 3.05% by Citibank and Discover Bank.

I also know that Citibank offers its own clients ludicrously low rates on their deposits. To get Citibank to pay up for your money, you have to go to a brokered CD.

In terms of savings accounts, American Express Bank offers 1.55%. Marcus, the new retail bank Goldman Sachs launched, offers 1.60%. Both are trying to attract new depositors, and they advertise those rates on their websites, and their existing depositors get the same rates, unlike at my bank or at Citibank and others.

So it’s a cat-and-mouse game.

But when your bank already sits on your money, it doesn’t feel like it needs to compete. It just wants to keep its funding costs low. And it is doing that by paying insultingly low rates on existing deposits. It will continue to do so until clients are starting to move money out of this bank to greener pastures.

Credit unions and smaller banks might offer higher rates if they feel they need to compete with the big boys for clients and deposits.

So for people hunting down higher deposit rates, the time is now to start looking for competitive market places. The fact is even the biggest banks offer competitive rates because they want and need to attract new deposits, but they’re not offering those rates to their existing clients.

Leverage – the risk it poses to banks – is why the Fed has been worried about the price bubble in commercial real estate. Read…  As Malls Get Crushed, Commercial Real Estate Prices Fall to Lowest in Nearly Two Years

54 comments for “Why Aren’t Big Banks Paying Higher Interest Rates on Deposits though Rates Have Surged?”