Corporate America fears that a Trade War would hit supply chains in China.

Something strange happened in the Empire State Manufacturing Survey released by the New York Fed this morning. The survey has two headline components: The index for current conditions and the index for future conditions six months down the road. The first index behaved reasonably well; the second index plunged the most ever.

Executives are notoriously optimistic. In the survey, which goes back to 2001, expectations for future conditions are always higher than current conditions, and often by a big margin, even early on in the Financial Crisis before all heck was breaking loose.

The index of future conditions reacts to events. For example, it spiked after Trump’s election. So today’s biggest plunge in survey history is a reaction to an event.

The headline index is based on a question about “general business conditions.” The sub-indices are based on questions about specific aspects of the manufacturing business, such as new orders, shipments, unfilled orders, employment, etc.

But the index for future conditions – which is usually highly optimistic – got crushed, with only 40.3% of the respondents saying “general business conditions” are getting better and 21.9% saying they’re getting worse. This pushed the index down to 18.3, the lowest level since February 2016. The 25.8-point plunge from March to April was the steepest monthly plunge in the history of the survey. 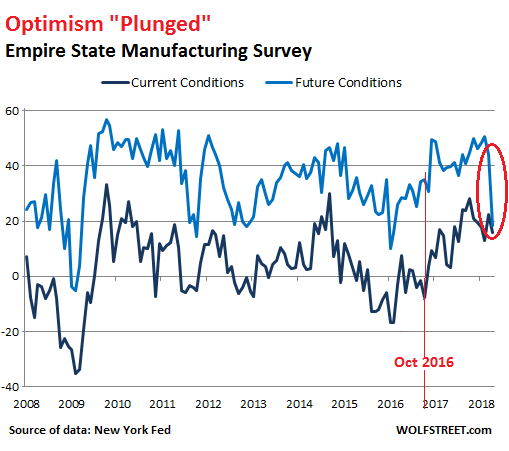 The 25.8-point April plunge took the index from 44.1 points in March to 18.3 points in April, the largest monthly plunge ever.

The second largest plunge (25.1 points) occurred in January 2016 as credit in the energy sector was freezing up and as the S&P 500 index was on its way to drop 19%.

The third steepest plunge (24.3 points) occurred in January 2009, during the Financial Crisis.

The chart below shows the month-to-month changes in the forward-looking general business conditions index: 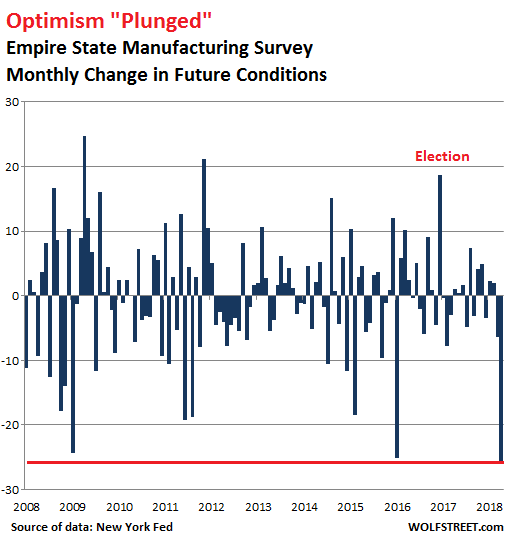 Among the forward-looking sub-indices were some standouts, in terms of by how many points they plunged from March to April:

Over the history of the survey, the index for future conditions has been on average 31 points higher than the index for current conditions, attesting to the rampant and enduring optimism of the executive mindset about the future. But in April, the difference plunged to just 2.5 points, the smallest difference since 9-11, when it had plunged to 0.6 points.

Why the plunge in optimism?

The report did not explain why optimism among manufacturers, after the 16-month Trump surge, plunged to this extent, so suddenly, and to such a low level even as the economy was clicking along, as long-term interest rates remained low, and as current conditions didn’t signal any major deterioration.

The future conditions index reacts to events. And there was only one major economic event that cropped up in the US during the survey period: Fear of a trade war with China.

It’s not that US manufactures export that much to China – they don’t, and that’s part of the problem. As a group, they worry less about China cracking down on manufactured goods exported from the US to China. But they worry about their supply chains. They’re going all over China and through China, importing into the US essential components and materials, thus contributing to the horrendous trade imbalances between the US and China. And these components and materials are now being specifically targeted by US tariffs.

The proposed tariffs would not stop those imports but would raise their costs, and the rising costs of those imports – or the costs of switching to another supplier outside of China – would eat into the profit margins of the US manufacturers. This would be the opposite of what happened when these executives decided to cut costs by offshoring their supply chains to China.

For now, no actual tariffs have been imposed. And it’s possible that Trump will cave under the pressure of Corporate America and that nothing will change — in which case we could expect this optimism gauge to spike once again.

Leverage – the risk it poses to banks – is why the Fed has been worried about the price bubble in commercial real estate. Read…  As Malls Get Crushed, Commercial Real Estate Prices Fall to Lowest in Nearly Two Years

51 comments for “Optimism of Manufacturers “Plunged” the Most Ever: NY Fed”